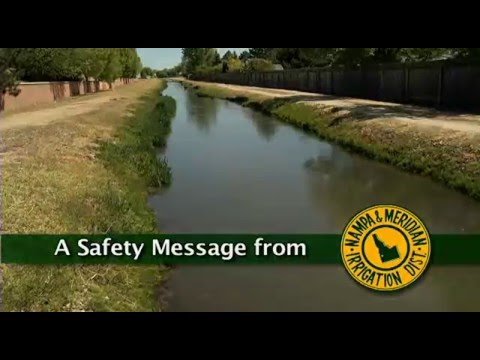 The incidence of accidental drowning in Idaho is too high. Idaho also has the unfortunate distinction of having the second-highest accidental drowning rate for children ages 1 through 5 in the United States. For over two decades, Nampa & Meridian Irrigation District (NMID) has worked with our taxpayers and community to foster a culture of safety around district canals and drains. NMID delivers irrigation water to 69,000 acres of farms and lawns in southwestern Idaho via the more than 500 miles of canals and drains it operates and maintains. Given the size of the district and the variety of properties through which its canals and ditches course, enclosing those canals and ditches in pipes or with fencing is not viable at this time. The cost of erecting and maintaining fences around 500 miles of canals and drains would not only be implausible, it would increase the risk of lawsuits: By constructing a fence, the district is communicating a duty to keep people away from a dangerous object (almost like a beware of dog sign.)

By using the proper licensing process, property owners adjacent to NMID canals or ditches are often in the best position to install and maintain fences. The licensing process ensures that the district has access to its canals and ditches for maintenance and the fence meets appropriate district standards.

There have been some efforts to institutionalize private fence maintenance; however, those efforts are difficult to maintain over time. Several years ago, concerned citizens formed groups to look at areas where high numbers of drowning incidents occurred. The groups constructed fences around schools and parks that bordered canals. However, maintenance is a challenge because the groups rely on private donations and involvement to maintain these structures, and many have fallen into disrepair.

More recently, the increased use of the land near canals and ditches for recreational purposes has made the maintenance of safety a challenge. Several years ago, due to an increase in requests, the district began licensing the use of land adjacent to drain ditches to neighboring cities to open recreational pathways. Our drain ditches are very deep, the banks are extremely steep, and there have been some drowning deaths that have occurred due to access from the trails that run near canals and ditches. Anytime the public is introduced to these areas, the possibility of accidental drowning increases.

In an attempt to help curb accidental drowning in its canals and ditches, NMID has implemented a tool to help people get out of our canals and ditches should they get into the water. In our main canal, NMID has installed grab bars to help people out of the fast and cold water. Little else can be done to help an individual who has fallen into a ditch, especially when no one is present to witness the accident.

Outreach on the Airways

Prompted by an increase in the number of drownings, NMID’s public safety efforts started in the early 1990s. We researched effective communication strategies, and we produced a radio advertisement. In those days, radio was more viable for public service announcements and a good forum for our message.

Later, the district began looking at different ways to get our message out. It became apparent that television would be the best forum. As a result, we have made several commercials to be released in summer, the peak time for children and adults to use the canals. Based on viewer statistics, the commercials were placed to run with particular programs; in the beginning, the Oprah Winfrey Show was the time slot we targeted due to the high number of young parents viewing the program.

Our Message to Kids (And Their Parents)

While the focus of NMID’s outreach is communication with parents, we also run programs for children. In conjunction with the Bureau of Reclamation, we run the Otto Otter program. Otto is a mascot that we send to local festivals and grocery stores. Kids love going up and seeing Otto as he hands out coloring books about canal safety. In addition, when offered, we take the opportunity to speak to kids in the classroom. We target third and fourth graders because at that age, the students are old enough to absorb and retain the information presented to them.

The best message we have for our campaign can be credited to a third grader. During one of my classroom presentations, a young girl explained our safety message to her friends by asking, “Well, would you go out and play in the middle of a road? That’s what he’s trying to say.” Our message is as simple as that.

What we are asking is for parents to treat canals and highways with equal regard. Unfortunately, there have been instances in which we have encountered parents playing in and around our canals. While a mother and father may believe they know how to act around a canal, children do not. In addition, although it is difficult, adults may have the strength and ability to get out of a canal in an emergency, while children do not.

Each year, farm work brings a number of migrant workers to the fields of the Treasure Valley. There have been a few instances in which NMID staff have encountered migrant farm workers cooling off in or by our canals.

A few summers ago, a man got into one of our canals after work. He went from working in 104-degree temperatures to near frigid water around 38 degrees. Due to the significant temperature change, his body went into shock and he drowned. As a result, NMID now educates migrants, in addition to all new residents in our community, about the dangers of canal water.

It is imperative that we continue to spread the public safety message to all who will listen. Parents and children must look at canals the same way they do an interstate highway and know to stay out. I am entirely too familiar with tragedy involving irrigation ditches, and I look forward to the year that the tragedies end.

Daren R. Coon is the secretarytreasurer of the Nampa & Meridian Irrigation District. For more information about the district’s canal safety program, you can reach Mr. Coon at dcoon@nmid.org.