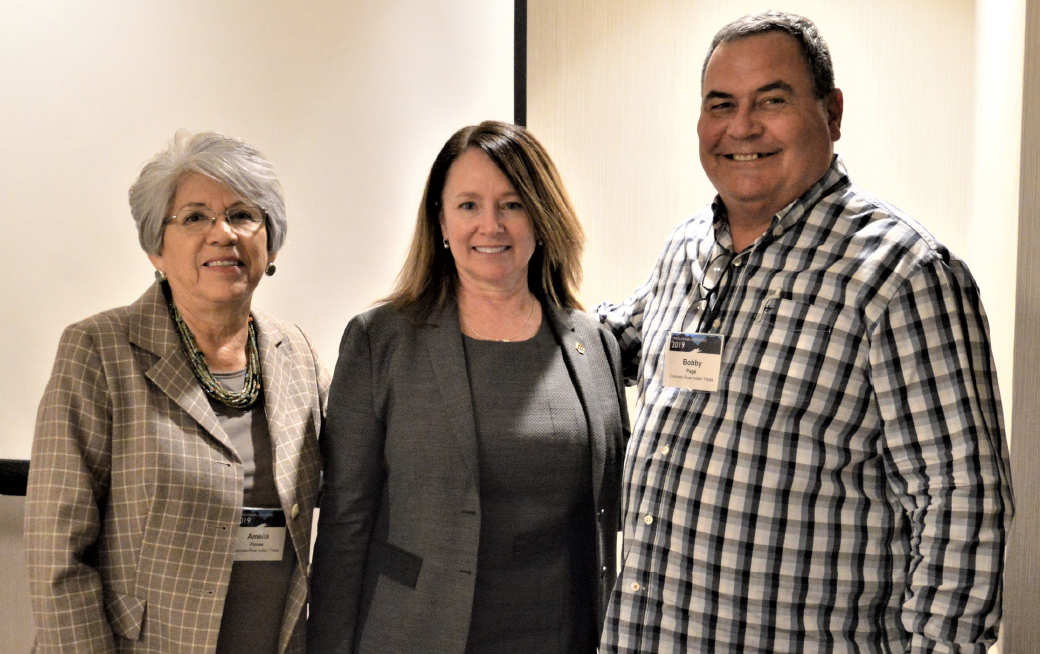 Amelia Flores is the newly elected chairwoman of the Colorado River Indian Tribes (CRIT), whose reservation stretches along the border of Arizona and California. In this interview, Chairwoman Flores tells us about her responsibilities as chairwoman, CRIT’s irrigation infrastructure, and its recent proposal for federal legislation to allow it to lease its Colorado River water off its reservation.

Amelia Flores: I served on the CRIT Tribal Council for the past 8 years as a council member and as secretary for three 2‑year terms. I was also our library archivist and director for 29 years. I have a bachelor of science in early education and a master’s degree in linguistics. I have lived on the reservation all my life and have worked in a service capacity to serve my people and community.

Irrigation Leader: What are your responsibilities as chairwoman of CRIT?

Amelia Flores: My responsibility is to oversee all aspects of our tribal government. I chair our council meetings. I am also responsible for addressing issues like health and education. Health, of course, includes issues associated with the pandemic, such as getting vaccines and tests. As for education, I just had a meeting with the University of Arizona and tribal members who need financial help getting their higher education. I shoulder a lot of responsibility, and I couldn’t have gotten here without the support of my family, my supporters, and the tribal membership that voted for me. One of my pledges is to work as a team, and we have been working as a team on water issues.

Irrigation Leader: Please tell us about the history of CRIT.

The reservation was set aside for the Mohave people. I am half Mohave myself. Then, the Chemehuevis from north of us were also invited to live on the land. Historically, they were our neighbors and lived on the west bank of the Colorado River, roaming with the seasons to gather their food. They were then provided with membership. The government was always looking at populating our reservation because of its large size, and after World War II, the colonization efforts of the BIA brought the Hopi and the Navajo onto the reservation. We also had the Japanese internment camps here. The Tribal Council knew at the time that it didn’t want other tribes coming in, but it did not know how to stop the government. It finally hired a lawyer to stop any other tribes from coming onto our traditional lands. Today, the council serves all its citizens—Mohave, Chemehuevi, Hopi, or Navajo—equally.

Amelia Flores: Of course, one is keeping our tribal members safe from COVID‑19. We have really been affected by the virus, and we have instituted stay-at-home orders for many months. Right now, we are focusing on getting testing and immunizations for our tribal members, working closely with the Indian Health Service. The pandemic has hit the revenue of our enterprises hard.

Then, of course, we are working on our irrigation project. The irrigation project is not in good shape, and that is because the BIA has failed to maintain it. Every year, we lose almost as much water as we can use because of leaky canals and design flaws in the system. That holds our farmers back, and it means the tribe isn’t getting the economic growth we would like to see. And of course, inefficient use of water in the middle of a drought is really a problem.

Irrigation Leader: Would you describe your irrigation project?

Amelia Flores: The project on the Arizona side of the reservation is a traditional open-channel-delivery irrigation system, similar to those of a lot of irrigation districts across the western United States. It has suffered tremendously from a lack of upkeep and investment, and it’s going to take quite a bit to bring it up to speed. As that happens, it will free water up that will allow CRIT to put more land into production and that can be put toward other economic uses. Our tribe is committed to keeping our agricultural heritage and economy, so we will maintain our agricultural footprint on the reservation today. It’s a valuable asset that is important to us. At the same time, we need to be able to take that water and put it to the uses that were intended by the Supreme Court decree.

Amelia Flores: We’d like to be involved from the get-go whenever changes need to be made and whenever decisions that affect the Colorado River are taken. We’ve been left out of the negotiations and consultations in the past. Policy has changed, and hopefully with this new administration, we will get a seat at the table. I know that my predecessors appealed to the federal government in the past, but their pleas went unheard. We are hopeful that that will change.

CRIT is also working on federal legislation that would allow us to lease conserved water to other stakeholders in Arizona. Other tribes in Arizona have obtained this right from Congress, and if given this ability, we think we can make a big difference for those that may face shortages in the years to come. We also would really like to be able to use this authority to improve our communities and the environment along the river. Any water we lease would come from conservation, so it really is a win-win-win for the tribe, the state, and the environment.

Irrigation Leader: What is your message to the other Colorado River water users? How do you plan to work with them?

Amelia Flores: Our legislative bill would help stabilize the Colorado. If you don’t put any flexibility into the system, there might not be water available for upper and lower river users. Our proposal would help to ensure that they have water supplies. Having enough money to repair our irrigation systems would conserve water. It’s not that we want to make a big profit; we just want to keep our economy balanced. We do have sovereign rights, both over our land and our water.

Irrigation Leader: What is the main goal of your legislative proposal?

Amelia Flores: We want to release our water after fallowing acres. This would allow us to make the needed improvements to our farmland and allow other entities that need the water for their work to benefit as well. We’re working right now with the federal government and the State of Arizona to lease our water. We’ve held public meetings, and there has been minimal controversy so far.

We took part in a conservation pilot in 2016. We had previously applied, but we were not accepted until we tried again. We showed the Bureau of Reclamation that we were serious about helping free up some of the tribe’s water, and it accepted our proposal. We demonstrated that we could farm less and use the water we saved to benefit the environment.

Irrigation Leader: What is your message to Congress and Reclamation?

Amelia Flores: We’ve been at the table; we know that we can work together. We are not in opposition; we want to make this work.

One of the things I’ve often heard previous tribal leaders say is that this effort in Congress will bring the water system on the reservation into the 21st century and allow the tribes access to the same resources and authorities as other water users in the state. I think our country has woken up to the fact that economic development has passed over a lot of Indian country because of federal and congressional policy. By recognizing that and enacting win-win-win legislation, we hope we can start to address the systemic underinvestment in Indian country.

The other thing that I want to mention is that most of the water that we don’t use on our land goes back into the Colorado River and is used by others for free. We’re not compensated at all. It wasn’t negotiated in Arizona v. California; we didn’t have any representation at that time. That’s why we want to have more control of our water.

Irrigation Leader: Is there anything else that you would like to add?

Amelia Flores: In addition to the income we gain from leasing our water, we have cultural ties to our river. The Mohave people have cultural ties to the water and still maintain our practices with the water. Our creator, Mataviily, gave us the land and the water to live off, and we are the stewards of these resources. Those stewardship responsibilities include making sure we keep water flowing in that channel for future generations.

Amelia Flores is the chairwoman of the Colorado River Indian Tribes. She can be contacted at (928) 669‑1280.