Colton Russon, who runs a dairy farm and grows barley, corn, and hay in Tremonton, Utah, has recently started using a Rubicon FarmConnect system. In this interview, Mr. Russon tells us about the results he is seeing from the system.

Irrigation Leader: Please tell us about your background and your current farming operations.

Colton Russon: I work with my father-in-law on his dairy farm. We also grow barley, corn, and hay. Right now, we’ve split one field in half and have summer fallowed one half and are growing corn on the other. We’ve got about 50 acres total.

Irrigation Leader: Why did you purchase and install a FarmConnect system? What was the problem you were trying to solve?

Colton Russon: We had a bunch of small fields that were eroding into a nearby creek, so we laser leveled everything and changed the direction of the water flow. Our aim in that was to make our irrigation more efficient and to get the same results with less water. The State of Utah told us about Rubicon, so we decided to look into it. We got funding from the state to help us purchase and install an automated system, and we started using our Rubicon system just a couple of months ago.

Colton Russon: We’re in the experimental stage of this process. Right now, we actually irrigate our corn by flooding it, rather than using furrow irrigation. We are trying to figure out what works best with the system. Next year, we’ll probably do what they call a pontoon—we’ll dig a 6‑inch trough in front of the blade valves and fill that up, then furrow the corn up to that little trough.

Irrigation Leader: What results are you seeing from this system?

Colton Russon: There are several things that have been great. It’s a lot easier to change a valve or something by using your phone. It’s nice to set up a program on FarmConnect to let the water run all night long instead of having to go out and do it myself. Before, we were running siphon tubes, so I would have to be in the fields at 2:00 or 3:00 a.m. Now, we’ve got sensors out in the field that allow me to track everything. A bunch of helpful information is now available, too. This system has made our irrigation faster. We have been able to go across the field more quickly; we’re gaining time every day.

Irrigation Leader: How could the dairy industry benefit commercially from using a system like FarmConnect to make its surface irrigation more efficient?

Colton Russon: The difference that we’ve noticed is that our irrigation has become more efficient, which is especially important given the current water situation in Utah. We can get across the fields faster with less erosion, hopefully giving the plants their exact water needs. I know that the sensors of the FarmConnect system will tell me when the plants need water. That way, we can raise better yield and better crops for dairy cows.

Irrigation Leader: Would you tell us about the experience of working with Rubicon?

Colton Russon: Rubicon was awesome. We ran into a few issues related to translating Rubicon’s original metric measurements into U.S. units, but the company was great and was able to figure that out; I didn’t even have to get involved. Rubicon staff have helped me figure out the system and how to do various things. The technical support has been great. The people have all been awesome in helping me get everything running and figure out better ways to be more efficient in watering the crop.

Colton Russon farms in Tremonton, Utah. He can be reached at cr.butchering@gmail.com. 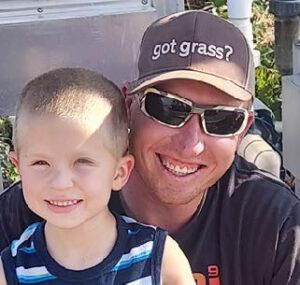