The United States and Mexico share nearly 2,000 miles of border, more than 1,200 miles of which runs along the Rio Grande. Further west, the Colorado River crosses the border and flows into the Sea of Cortez. The border, and water deliveries across and along it, are governed by numerous treaties as well as subsequent agreements, or minutes, that clarify them. The International Boundary and Water Commission (IBWC), which has both U.S. and Mexican sections, is the entity charged with applying those boundary and water treaties and settling disputes that arise in their application. In this interview, we speak with U.S. Section Commissioner Maria-Elena Giner about the commission’s work, including its river maintenance and sediment removal activities, and the challenges posed by drought in the Rio Grande and Colorado River basins.

Commissioner Giner: I’m a civil engineer. I also have an MBA from the University of Texas at El Paso, and I recently obtained my PhD in public policy from the University of Texas at Austin. I’ve worked for 25 years along the U.S.-Mexico border. For 20 years, I served as general manager of the Border Environment Cooperation Commission, which was created out of the North American Free Trade Agreement and is now part of the North American Development Bank. During that time, I led the development and financing of $9 million in environmental infrastructure, benefitting more than 100 communities and 15 million residents on both sides of the border. I worked to bring many of those communities wastewater service and, in some cases, water service for the first time. I also helped bring renewable energy to the region.

Commissioner Giner: The IBWC is responsible for applying the boundary and water treaties between the two countries and settling differences that arise in their application. The U.S. Section of the IBWC is headquartered in El Paso. The Mexican section, headquartered in Ciudad Juarez, is led by my counterpart, also a woman, Commissioner Adriana Reséndez. This is the first time we’ve had two women leading this organization. The U.S. Section has offices in San Diego, California; Nogales and Yuma, Arizona; Las Cruces, New Mexico; El Paso, Fort Hancock, Presidio, Del Rio, Laredo, Falcon Heights, and Mercedes, Texas; and Washington, DC.

Our duties include maintaining flood control levees, international storage reservoirs and diversion dams, two wastewater treatment plants, and the boundary monuments that demarcate the U.S.-Mexican border from El Paso to San Diego. Our projects include sanitation, rehabilitating trunklines, water accounting, and allocating water based on the 1906 and 1944 treaties.

Irrigation Leader: The IBWC’s territory spans from the Pacific Ocean to the Gulf of Mexico, and you work with two countries and multiple states. How does your agency relate to the federal and state governments?

Commissioner Giner: We are a federal agency, and we are funded through the U.S. Department of State. I do a lot of work with the Department of State to settle differences and work out agreements between the United States and Mexico, because there are caveats within the treaties that can cause problems. We look at everything from cost sharing to water accounting to water conservation efforts. The minute process determines how the treaty is interpreted and how we should solve problems. When the two sections agree on a minute, the Department of State goes through an authorization process.

When it comes to the legislative branch, both the United States Senate and the House of Representatives are interested in our work, the infrastructure we maintain, and how we’re funded. They are interested because we maintain federal assets and because water accounting ensures sure that the United States is meeting the requirements of the treaty and boundary. Boundaries change all the time, so ensuring the integrity of the boundaries is important.

We also interact with state water and environmental agencies on a variety of issues, including water delivery requests, water deliveries to Mexico, and sanitation. The Texas Commission on Environmental Quality (TCEQ), for instance, is one of our major stakeholders. We interact with the states on their requests for water deliveries. In the case of the Colorado River, we interact with several states, reaching all the way up to Wyoming, to ensure that we can complete agreed deliveries to Mexico. In California and Arizona, sanitation issues are important. We’re also engaged with local communities in the border region. We hold events called citizen forums that allow us to communicate directly with our communities on a regular basis.

Irrigation Leader: What infrastructure does the IBWC own and operate?

Commissioner Giner: Our major infrastructure consists of two international dams: the Amistad and Falcon Dams, both of which are on the Rio Grande. We maintain 508 miles of levees for flood control. We also maintain five diversion dams along the Texas border and 258 boundary monuments from El Paso to San Diego. There are also two wastewater treatment plants, one in San Diego and the other in Nogales, Arizona. We have a diversion dam in Baja California called Morelos Dam, which is where the Colorado River water comes through.

Irrigation Leader: What is the commission’s role in allocating and distributing water for irrigation, and how much water does it allocate for irrigation each year?

Commissioner Giner: The IBWC does not own the water, so we do not allocate it. Reclamation does. Our role is water accounting and ensuring that Mexico receives the water allocated to it under the relevant treaties, and we partner with the U.S. Department of the Interior to carry out those tasks. Interior manages all the infrastructure and the states’ water requests. The United States provides 1.5 million acre-feet of Colorado River water to Mexico each year. Mexico also stores water in Lake Mead—there are a lot of intricacies associated with that.

Two treaties apply to the Rio Grande. The 1906 treaty, which requires delivery of water, is managed by Interior as well. That water is delivered to Mexico depending on snowpack and water availability. Elephant Butte Irrigation District, El Paso Irrigation District Number 1, and Mexico determine the allocation of water that will be coming down from the snowpack in the Rockies. Further down the Rio Grande, the 1944 water treaty allocates 1.75 million acre-feet of water from six Mexican tributaries to be delivered over a 5-year period to Texas. How we allocate that water is also dependent on rainfall. There are other tributaries to consider as well: In addition to the six from Mexico, there are six from the United States. Certain countries own certain amounts of water. In the case of the Rio Grande, Texas owns the water and we manage it. We interact with the TCEQ, which is the entity that requests water deliveries on a daily basis. Water isn’t always available; it depends on the time of year.

Irrigation Leader: What sorts of river maintenance is the IBWC in charge of?

Commissioner Giner: We have international dams and diversion dams, and there are always things that need to be done to maintain those structures. One large capital investment is to shore up Amistad Dam, which is a critical item right now in terms of safety. We also do a lot of mowing on the floodplains and the levees. We make sure they’re maintained appropriately to ensure proper flood protection.

Irrigation Leader: What issues does sediment buildup pose for the flow of water in the Rio Grande?

Commissioner Giner: When sediment builds up, it forms islands that slow the river’s flow. It also causes land to be lost to erosion and boundaries to move as the river changes course. We have a lot of sediment issues from Las Cruces, New Mexico, all the way down to Fort Hancock, Texas, but we’ve had limited funding to mitigate them. We are dredging about 100,000 cubic yards of sediment, but right now about 17.5 million cubic yards of sediment has built up, which would cost $300 million to remove. We’re not receiving that kind of funding, so we’re doing the best we can with the funding that we do receive.

Irrigation Leader: What issues do the droughts in the Rio Grande and Colorado basins pose for the operations and activities of the IBWC?

Commissioner Giner: Two factors are causing drought: reduced snowpack and higher temperatures. The reduction in snowpack means less water from runoff. A learning experience for me was discovering how temperature affects drought. For example, in the Colorado River, there was 90 percent of average snowpack last year, but we only got 30 percent of average runoff. That was because of the dryness of the soils and the increased temperatures. Warmer temperatures earlier in the year caused more evapotranspiration. This has serious effects on drought conditions. We don’t manage Colorado River water deliveries north of the border, so what we can do to offset these issues is implement water conservation projects in the Mexican states of Sonora and Baja California to create water savings. That way, less water needs to be taken from Lake Mead. Those efforts have added about 2–3 feet of elevation at Lake Mead. That is valuable for all the lower basin states. We are working to identify additional conservation measures. Both countries believe that if the three lower Colorado basin states—Arizona, California, and Nevada—are receiving reduced deliveries, Mexico should also receive reduced deliveries.

Irrigation Leader: What is your message to the irrigated agriculture community?

Commissioner Giner: We are working toward creative solutions on how and when we use water. We’re looking for opportunities to identify projects that will conserve water or create new water sources. We are partnering with foundations, nongovernmental organizations, states, and the federal government to identify funding for these projects so we can create a more sustainable watershed in the long term.

Irrigation Leader: Do you also have a message for Congress?

Commissioner Giner: Policymaking from congressional leaders is important for the U.S.-Mexico border region. That policymaking includes the funding that is needed for water conservation and for creating new water sources. It’s important for Congress to understand that we are doing the best we can with the resources we have, but it’s not enough. Our agency serves some of the most disadvantaged communities in the country. If you were to take all the border counties, excluding San Diego, and call them a 51st state, it would rank lowest in per capita income. It would also rank second in population under the age of 18, which is a more vulnerable population, and would also have some of the highest demographics of minorities. Serving these disadvantaged communities is important.

Commissioner Giner: My vision for the future consists of what I call my three Ps: personnel, projects, and policy. I want to ensure that we have adequate staffing and that our people have the necessary tools to serve our communities and to continue operating the federal assets we’ve been entrusted with. Right now, we are significantly understaffed, and we’re working to communicate that to our federal stakeholders. As for projects, I have some significant ones I’m focusing on related to sanitation, water quality, flood protection, and water deliveries. Third, I’m working on some important policy issues specifically related to asset management. The vision I have is to create an asset management plan to give us a clearer picture of our construction needs, our operations and maintenance needs, and our staffing needs. My vision for this agency is implementing those three Ps.

Maria-Elena Giner is the commissioner of the U.S. Section of the International Boundary and Water Commission. For more on the IBWC, visit ibwc.gov. 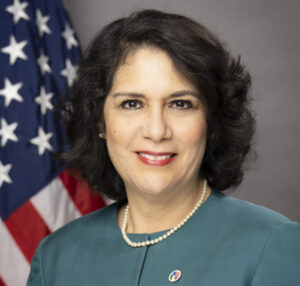