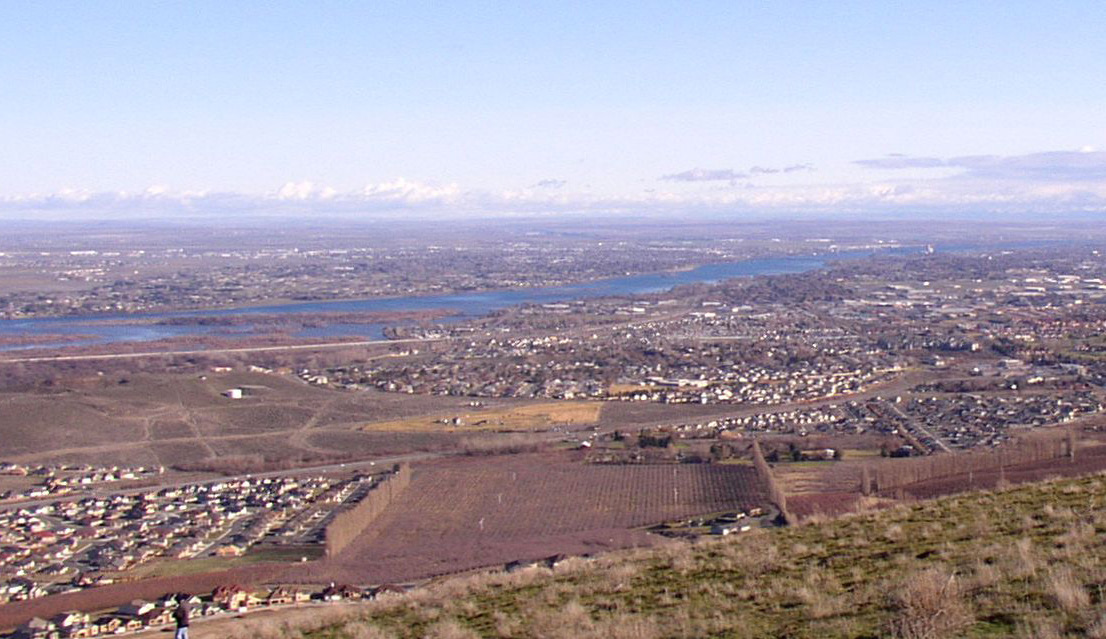 Raman Venkata came to the United States in 1968 as a graduate research engineering assistant studying at Washington University in St. Louis, Missouri. Over the next 50 years, he worked for multiple nuclear engineering firms and for the U.S. Department of Energy (DOE) before retiring and being elected to a spot on the Kennewick Irrigation District (KID) board of directors. In this article, Mr. Venkata tells us about his compelling life story, his professional accomplishments, and his current priorities as a KID director.

In 1966, after finishing my undergraduate studies at the University of Madras, where I graduated in the top 1 percent of my class, I got a graduate research fellowship, an award for bright, promising students from the Commonwealth countries, to study in Canada. I had applied during my second year, and one morning I got a telegram from the Canadian authorities telling, me that I was assigned to McGill University in Montreal. I did 4 months of summer research there. Afterward, I was supposed to go back to India and join a respected engineering construction company, but one of my professors, Ira Beattie, became chairman of the University of New Brunswick and wanted me to pursue graduate studies there. I was given a research fellowship with the Canadian government and did a master’s in civil engineering with a specialty in structural engineering and a minor in solid mechanics, graduating in 1968.

In September of that year, I started a doctoral program at Washington University in St. Louis with an American Institute of Steel Construction (AISC) fellowship. I was there for 2 years. I finished all the coursework, but unfortunately lost the support and had to leave the school to look for professional opportunities. I was pretty broke and barely had funds to support myself. I didn’t even have the luxury of hiring a typist to do my résumé, so I wrote everything by hand. I used to walk the 10 miles between the Washington University campus and downtown St. Louis every day to search for a job. Finally, a Hungarian-American gentleman named Rudy Frank Fischl—who had problems with his accent, like I did—offered me a temporary job in his firm as a draftsman. I accepted and worked on reviewing shop drawings for the construction the firm was doing on a bridge. I pointed out a lot of errors in how the bridge was put together, as well as noncompliance with the AISC code. Rudy was so pleased that he promoted me to an engineer position after 1 week and gave me a little raise, from $4.25 to $7 per hour.

Later, I found an opening in Philadelphia with Day & Zimmermann Associates (DZA). I applied, Rudy recommended me, and I was hired as a project engineer on the construction of a particular school. Subsequently, I did lot of work on schools and chemical plants. I also steered an $18–20 million project for the American Medical Association. DZA was nice enough to help me out with immigration. I became an immigrant in 1971. I was also married in March 1971 and was struggling to figure out how to bring my wife here. Fortunately, the vice president of DZA, Francis Vitetta, a wonderful guy, paid for her airfare and called U.S. Senator Bill Bradley. Within 48 hours, she was issued a visa and came over.

I got into waste treatment plants and other heavy engineering projects and then got interested in working on nuclear power plant facilities. I joined Stone & Webster Engineering Corporation, which was building a nuclear power plant in Louisiana, and spent 5–6 years there before joining United Engineers as a lead engineer. Later, I joined Bechtel Power Corporation as an engineering supervisor. I rose in the ranks from supervisory engineer to discipline engineering manager and eventually to technical advisor, and I retired in 2006 after serving Bechtel Savannah River Site, Inc., for almost 20 years.

At that point, the DOE’s Office of River Protection (ORP) showed interest in my work experience. They wanted someone with my expertise in seismic engineering to work in eastern Washington. It took almost a year to convince me, but I finally came here in 2008 and worked as a safety systems oversight (SSO) engineering specialist for the DOE’s nuclear facilities at its Hanford site, including a waste treatment plant that is being built at a cost of $10–15 billion. I was given complete authority to oversee the structural safety systems. I worked hard for over 8 years and won the U.S. secretary of energy’s SSO of the Year award in 2014. It was the greatest recognition of my professional life. I also was nominated and accepted as a fellow of the American Society of Civil Engineers (ASCE) in January 2016. I retired from the DOE in September 2016. When I retired, I was presented with an American flag by the ORP management and its chief engineer, Ms. Elaine Diaz, under the auspices of Congressman Dan Newhouse. The flag had been flown at the Savannah River Site, where I had served for 18 years; at the ORP in Richland; and on the United States Capitol dome. With my family and children all in attendance, the presentation of the flag was a deeply touching experience and the highlight of my career.

After my retirement from the DOE, one of my good friends told me that I should apply to serve on KID’s board of directors. I was reluctant, but he brought me the application and told me to sign and send it. I stood for election and was miraculously elected in December 2017 for a 1-year term beginning in January 2018. I was reelected with no contest for 3 more years with this great organization beginning in January 2019.

There are three areas in which I am sharing what I have learned over the past 48 years of work to pay back all this great country has given me. The first is KID. The second is Washington State University, where I teach the senior engineering graduating class a course in structural steel design. The third is my work on ASCE’s National Codes and Standards Committees. Being a fellow of ASCE is an honor and a privilege. As a matter of fact, while I was at the ORP in Richland, I developed functional area qualification standard 1182, which specifies all the qualifications required to be a civil structural architectural engineer in the DOE.

At KID, we are doing our best to make sure that all our customers and citizens are happy. We provide an important service to the community, and we rely on them for their support. We are careful in listening to their needs and supporting them.

The KID board of directors has been investing in the district’s future for decades. During the 1960s and 1970s, the district worked with the Bureau of Reclamation to rebuild the main canal following a string of canal failures. One of those failures caused the Amtrak derailment in Badger Canyon. In the 1980s, the district piped some of its smaller lateral ditches to combat safety missteps. Over the last decade, KID’s capital improvement program has evolved with the establishment of the associated surcharge. Each account is charged a flat rate, generating approximately $1.4 million annually. These dollars have been used to leverage funds in our successful applications to Reclamation’s WaterSMART program.

In 2010, the board of directors chose public safety as its number 1 goal. Since that time, KID has been focused on lining its earthen canals to make them stronger, safer, and less prone to breaches. Since 2007, KID has spent approximately $12 million and has been awarded $7.5 million in grant funds to line over 30 miles of open canals. We are hoping that over the next 18 years, KID will line the remaining canals using high-density polyethylene. KID also has more than 300 miles of buried pipe leading to the cities of Kennewick, South Richland, West Richland, and unincorporated Benton County.

I have been the cochairman of KID’s finance committee and am currently the cochairman of the operations and engineering committee. Last year, I initiated enhancements to the existing rewards program. With the board’s approval, funds are being set aside to recognize and reward staff performance.

Our funding and our rate increases have allowed us to hire more employees to work on these projects. We also developed the Red Mountain project. KID covered 66 percent of this project’s costs with a grant/loan package from the Washington State Department of Ecology. We are limited as to what we can invest in, and this project was an investment back into the community we serve.

We have a wonderful management staff and a meticulous financial advisor. Whatever money we can save, we are investing. The rate of return on our Red Mountain investment is almost 6 percent. We have raised approximately $551,000 this year. This additional money has been designated to go to KID’s pipeline replacement program.

KID serves 50,280 acres and 53,000 accounts and supports the local economy in a big way. We have $50 million in high-value crops, such as cherries and grapes, in this area. It also contributes to the large-scale landscape maintenance industry here, valued at $12–14 million. There are also 15,000 tons of carbon stored by local forests, valued at more than $2 million.

KID’s water source is return flows from upstream irrigation diversions, which are affected by federally funded water conservation projects. They are reusing these flows according to river modeling completed by Reclamation. In 2015, we went through a drought that hurt a lot of people. We are trying to prevent this from recurring by electrifying the Chandler Power and Pumping Plant, which was authorized by Congress in 1994. This is used for mitigating the reuse and return flows coming from the Yakima Project. The engineer’s analysis commissioned by KID estimated the cost of the Chandler electrification project to be $23 million, substantially less than previous estimates. In addition to being economically beneficial, the project is also an opportunity to partner with tribal and fisheries interests, building on collaboration that is already in place. The goal is to expand on those partnerships with the leadership of KID.

KID is a strong district with a high bond rating, zero debt, and substantial real property assets. KID is currently undertaking a partial title transfer of the Kennewick Division, which would include the 42-mile main canal, 50 miles of laterals, the Amon Pumping Plant, siphons, and wasteways. This project will provide us the ability to apply local solutions to our community’s challenges.

I come from a small village in southern India. I dreamed of coming to the United States, and during my college years, it became a reality. I am blessed with a wonderful wife whom I have been married to for 48 years. We are blessed with two daughters and a son. They are all well educated at reputed graduate schools. I came with hardly 8 bucks in my pocket; that’s all the Government of India would allow. I’ve been in the United States for 51 years. The United States is probably the greatest nation on this planet. I feel extremely blessed and fortunate to be here, especially among the wonderful directors at KID. I am 78 years old, but I won’t feel really retired until KID’s projects are well under way. I’m here to contribute.

I remember that President George H. W. Bush always talked about the “thousand points of light.” I was reminiscing with a deep sense of humility about President Bush’s remark that we have to work hard so that our nation becomes a kinder and gentler place. Although we are going through difficulties now, I feel deep in my heart that I should do my best, maybe even better than what I am doing, and be kinder and gentler with everyone I come across in my life.