The Horsefly Irrigation District (HID) in arid eastern Oregon provides water to 11,600 irrigated acres. To address limited supplies and evaporation, it has started piping its 25 miles of canals. In this interview, HID Manager Justin Eary tells us more about the district’s current projects.

Justin Eary: I grew up around agriculture and have a background in irrigation, equipment operation, and maintenance. My grandpa had a dairy farm and a hay farm. I irrigated for my grandfather on his farm and worked for a couple of large ranches. At one point, I flood irrigated about 1,000 acres by myself.

At one point, I was working for myself as a contractor, and one of the HID board members whom I knew approached me and said, “Irrigation season is coming up, and we’re way behind in converting a canal to a pipeline. Could you help us out?” I said that I could make time to come in the following week. Then they called me back and asked, “You know how to run an excavator and a bulldozer and you can weld, right?” I said yes. They said, “Okay, thanks. That’ll help.” When I met them the next week at the office, I walked into an interview. They wound up hiring me as the assistant manager. That was a few years ago. Now, I’ve been the manager for almost 2 years. That started a new journey for me.

Justin Eary: HID was officially started in 1911, although it was running as early as 1906. We have a 1905 water right. The district boundaries enclose almost 22,000 acres, of which 10,200 are irrigated with our water right. Another 1,400 acres are related to what we call the Bowne water right. Francis Bowne was the landowner who built the first phase of our original dam on the Lost River. The Bowne water right dates back to 1902, predating HID’s. Including the Bowne right, we irrigate a total of 11,600 acres. Our operations staff consists of two ditch riders, the secretary, and me.

In downtown Bonanza, Oregon, right on the edge of the Lost River, is the Bonanza Big Springs Park. There are over 150 springs in the park. We have to maintain those water levels to provide safe drinking water for the town of Bonanza, which does not have a municipal water system. Each house has its own domestic well, and all the wells are tied directly to the springs. The springs slow down every year during the summertime and risk being contaminated by the Lost River. HID works closely with the town to regulate the water level in the river and the springs to maintain a safe distance so that the springs flow clear and there is no risk of reverse flow or the contamination of wells. We also have a water right on the springs; we can use any of the flows from those springs as part of our water right.

Our location on the east side of the Klamath basin is pretty arid. Today, with changing weather patterns and environmental regulations, we don’t have the water that we used to have. Some students from the Oregon Institute of Technology did some studies for us two summers ago and found that we’re losing 40 percent of our water to evaporation and subbing. Our water right is for 2 acre-feet of water per acre of land, but to deliver those 2 acre-feet to a customer, we would have to pump 314 just because of transmission loss.

Most of the Klamath basin gets its water from Upper Klamath Lake, but we don’t. HID and our neighboring district, Langell Valley Irrigation District (LVID), get our water from Clearlake and Gerber Reservoirs, which are basically between Klamath Falls and Lakeview. Those two reservoirs are on the edge of the Oregon high desert, and they refill slowly. After they’ve been drawn down during a drought, it might take several years for them to refill. We try to make sure that there is water left in those reservoirs for the next year, because there’s no guarantee that they will refill. HID and LVID work together closely to maintain carryover storage in those reservoirs for the coming years. One way we reduce the amount of water we’ve got to bring down is through piping projects.

Irrigation Leader: What is the relationship between HID and the Bureau of Reclamation?

Justin Eary: When Reclamation was building the Klamath Project and dividing it up into districts, it levied a construction cost and an operations and maintenance cost. HID thought that those costs were much too expensive and that it could do these tasks less expensively on its own. It opted out of that arrangement, and Reclamation honored the decision. We are part of Reclamation’s Klamath Project and have a contract with Reclamation, but we privately own our dams and all our infrastructure.

Irrigation Leader: Please tell us about your piping projects.

Justin Eary: Around 2007, HID began a few small piping projects to fix some leaks in the canals. Staff soon realized that the piping projects made a huge difference. In some cases, the leaks were so severe that there were cattails growing in the fields below the canal. Those went away when they piped those little sections. They started thinking, “Hey, I wonder how much we’re losing in other places. I wonder whether we could save more water by piping more canals.” HID started piping heavily around 2014, and about 11 of our 25 miles of main canal are now piped. We will also eventually pipe a couple miles of laterals.

The pipe is amazing because it doesn’t have aquatic weeds or moss. It really cuts back on the maintenance and labor required to run water, and it saves water. We bought most of this pipe using funds from Reclamation’s WaterSMART grant program. We used the grant funds to purchase the pipe and, as our part of the cost share, used our equipment and manpower to install the pipe, control structures, and concrete boxes.

Irrigation Leader: What factors went into selecting the type of pipe you were going to use?

Justin Eary: As I mentioned, the piping project began by fixing leaky spots in the canals, sometimes only a couple hundred feet long. At that time, HID selected high-density polyethylene pipe, which is black plastic pipe that is corrugated on the outside and smooth on the inside. It was chosen because it was inexpensive. We’ve mostly continued using that same style, because it’s what we had and could easily attach to existing pipe to continue the project down the canal line. However, in some places, we do use heavy-wall PVC. In a couple places, we’ve gotten the owner of the land that the canal goes through to agree to exchange plans for a right of way, and instead of sending the canal around the property in a big, half-mile horseshoe shape, we can use a straight line of 1,200 feet of pipe. If there is enough head pressure to push water through that, we use heavy-wall PVC to make siphons. We’ve done that in a couple of spots, and it’s really worked out well, because then the landowner can reclaim that land. We fill in the old ditch with the ditch bank that was there and level everything out, and then they can farm over that. It works out well for both parties.

Irrigation Leader: What other plans do you have?

Justin Eary: We’re working on updating some of our pumps. We put in a new well 2 years ago and put it on a variable frequency drive. We’re looking at adding more of those, because they allow you to pump what you need instead of always running the pump at full capacity. We’d also like to use technology to be able to control our system remotely, which will reduce labor needs.

Justin Eary is the manager of the Horsefly Irrigation District. He can be contacted at justin.horsefly@gmail.com. 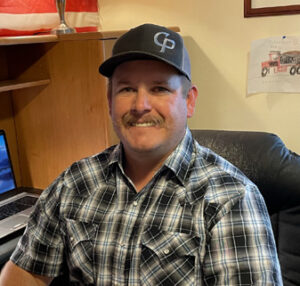