When the Middle Republican Natural Resources District (MRNRD) in Nebraska wanted to get a better picture of its groundwater supplies, it hired Aqua Geo Frameworks to do an airborne electromagnetic (AEM) survey. The district will use that information to better manage groundwater extraction and irrigated farming on the surface. In this interview, MRNRD Manager Jack Russell and Engineering Hydrologist Alex Boyce tell Irrigation Leader about their experience with the new technology and how it will help them help irrigated farmers in their service area.

Irrigation Leader: Please tell us about the MRNRD.

Jack Russell: Nebraska’s natural resources districts (NRDs) were created in the early 1970s by the State of Nebraska. The MRNRD is 1 of 23 NRDs across the state. Our service area is about 2.4 million acres and covers 41/3 counties. About 50 percent of that area is cropland, with 12.5 percent being irrigated cropland.

Alex Boyce: We have about 240,000 certified irrigated acres that are watered with groundwater, and the majority of that water is pumped from the Ogallala aquifer. We grow mostly corn, milo, and soybeans, along with some winter wheat. The NRDs in the Republican River basin and the State of Nebraska have a compact with the States of Kansas and Colorado called the Republican River Compact, according to which we are only allowed to pump as much irrigation water as we did back in 2004, so we have a moratorium on expanding wells and certified acres.

On top of the 240,000 groundwater acres, we have another 40,000 acres or so that are irrigated with surface water. Unlike the case with groundwater, the MRNRD doesn’t have jurisdiction over surface water, but we work closely with surface water companies. We have had to install meters on every one of our wells, and we have to measure deliveries of surface water, so we actually have a full accounting of how much water is pumped in our district.

Irrigation Leader: Please tell us about your work using AEM to map and measure your aquifer. Why did you want this survey done?

Jack Russell: In certain areas of the NRD, there are groundwater declines of up to 20–30 feet. That may not be a lot of decline over decades, but we wanted to better understand the factors that influenced those declines. It would be an added benefit to know what areas of our district have available groundwater that could support additional irrigation. Under the terms of the Republican River Compact, no new irrigation can be developed in the MRNRD, so understanding the factors that affect water balance is critical.

Alex Boyce: When I first joined the district, we started developing groundwater models and subregional watershed models. We noticed that our geology and 3‑D modeling lacked some information. We decided to start drilling some test holes to figure out where the weak spots in the data were. From there, we stumbled across a company that does AEM surveying and decided that was a more cost-effective way to get an idea of the aquifer’s properties. Instead of going out and drilling hundreds of thousands of test holes, we could just fly a helicopter over the aquifer and collect data rapidly.

Jack Russell: We already have rough information on the aquifer; now, we’re trying to take it to the next level and come up with a model that will help us predict the effects irrigation will have on it.

Irrigation Leader: Were you being proactive in doing this survey, or were you already running into problems with wells going dry or ground subsidence?

Jack Russell: I would say we’re being proactive. We hadn’t experienced wells going dry or ground subsidence, but some NRDs and other states around us have, and we wanted to make sure that we wouldn’t reach that level. This project fits well with our current telemetry irrigation flow-meter project, which will provide accurate, real-time irrigation flow measurements to water users.

Irrigation Leader: What company did you work with?

Alex Boyce: We worked with Aqua Geo Frameworks, based in Fort Laramie, Wyoming. They are geophysicists who conduct AEM surveys for groundwater modeling all over the United States and have worked with other NRDs in the past.

Irrigation Leader: How does Aqua Geo Frameworks gather the data?

Alex Boyce: It has a big, octagon-shaped device that is carried beneath a helicopter. The helicopter flies about 50 feet from the ground at about 50 miles per hour, covering planned flight lines and collecting measurements at different points. We select flight lines 1 mile apart and then connect points in the cross-section area. I went to every power district in our NRD and asked for maps of the power lines, because they interfere with the electromagnetic signal used in AEM surveying. Aqua Geo Frameworks plans its flight lines around power line locations and the geography of the area to get the best results. It then goes through the AEM survey and removes any unusual data. The survey collects information on resistance values through the ground. Different types of soil have higher or lower resistance depending on the composition of the aquifer. The University of Nebraska–Lincoln (UNL) uses machine learning to compare the resistance values from the AEM survey and test hole logs to create the best fit for the information. Once UNL knows the type of aquifer material, the data can then be used to create an underground 3‑D map of the aquifer. Knowing the type of aquifer material tells us about properties such as transmissivity, which is how easily water can flow through the aquifer.

We are going to develop a groundwater model of the entire NRD based on the AEM survey. The process basically spits out a groundwater model file that we can plug into a groundwater model, and then the engineering firm will calibrate the model based on how the model reacts to the properties measured by AEM. The AEM results are a great starting place for model development. Instead of just using information from a small number of test holes and guessing in the areas where there aren’t any, we will have a full coverage map.

Jack Russell: Aqua Geo Frameworks correlates the information it gathers through AEM with information from our observation wells and other existing wells for which we have profile information. The company is pretty intense about ensuring that its AEM measurements are accurate compared to actual conditions.

Irrigation Leader: What are you doing with those results, other than deciding where to drill wells?

Alex Boyce: We use them to help farmers figure out the best way to use water. When farmers tell us they can’t get enough water out of the aquifer, I’ll show them the data so that they can figure out whether they need to move.

Jack Russell: We received a grant from the Nebraska Natural Resources Commission’s Water Sustainability Fund that covered AEM for areas where we had groundwater declines and recharge potential. We’re getting ready to fly the rest of the NRD this summer. The project includes developing a final model combining the two projects. Currently, Alex can use the raw data working with producers.

Irrigation Leader: Would the groundwater model be able to help you predict the effects of any new well on the overall aquifer?

Alex Boyce: Yes. It actually creates a full groundwater budget that allows you to project groundwater levels in different areas 10 or more years into the future.

Irrigation Leader: Is the practice of doing AEM surveys of aquifers using helicopters widely known among irrigation districts and other water managing entities?

Jack Russell: It’s probably been used in Nebraska for several years. We initiated our project in 2020. The NRDs adopted it mostly because of our work with groundwater management.

Jack Russell is the manager of the Middle Republican Natural Resources District. 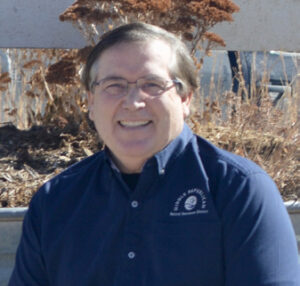 Alex Boyce is the engineering hydrologist at the MRNRD. He can be contacted at aboyce@mrnrd.org. 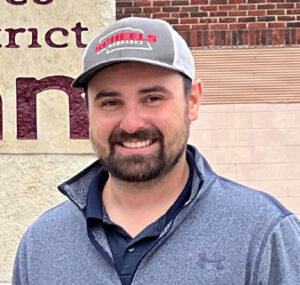