They absorb storm water and transform heat traps into flourishing rooftop gardens. They create desirable green spaces in urban buildings where people live and work. What’s not to like about green roofs? Irrigation Leader spoke with John Scholten of LiveRoof about what it takes to design a green roof that thrives.

John Scholten: I got my degree in horticulture and then worked in a research facility for a large flower-seed company in California. I did a lot of traveling and promoting products for the company. When I started my own family, I stepped back from all that traveling and started to look at other opportunities. I moved back to Michigan, where I was born and raised. Fifteen years ago, LiveRoof started here, and I was one of the company’s first employees.

John Scholten: The parent company of LiveRoof is Hortech, a perennial plant nursery that services independent garden centers and landscapers in the Midwest. Our introduction to green roofs came about 20 years ago, when Ford Motor Company put a green roof on its River Rouge truck plant. It purchased plants from us and consulted with us on plant selection. After that, we started increasing our plant selections for green roofs and supplying plugs for built-in-place green roofs. Then, a landscape contractor in Chicago that was installing green roofs asked our owner, David McKenzie, if there was a better way of creating green roofs. Mr. McKenzie spent a day with the contractor to see how it was doing built-in-place and other tray systems. On his drive back, he figured out in his head how LiveRoof would work.

Once a green roof is established, it’s easy to take care of; it’s the establishment that’s the hard part. The roof environment is too harsh to grow plants in the summertime. A black membrane roof can have temperatures of 130 degrees, and once plants get above 90 degrees, they start to shut down. We needed to grow the green roof at a nursery and then bring it to the roof when the plants were fully established. That was the idea behind LiveRoof. We worked on some patents for our module design, which is different from other module systems on the market.

Irrigation Leader: Why are more builders and architects getting interested in green roofs? Is the appeal mostly aesthetic, or is it to retain water?

John Scholten: All the above. Green roofs offer great benefits for both commercial and residential properties. Some cities with major storm water issues have set up their building codes to promote green roofs to help them manage storm water. Some places require builders to contain all the water that originally fell on that piece of property. Green roofs are valuable tools for achieving that goal. Over the years, some poor green roofs were installed on buildings in response to mandates, but cities have wised up to that. They’re doing inspections to make sure that the green roofs are maintained and are doing what they’re supposed to do. Green roofs can serve other purposes, too. One residential client with a flat-roofed house didn’t like to hear the rain, so we put in a green roof. It made the house much quieter, and it also stayed cooler in the summer.

Irrigation Leader: Would you describe the modules and how they work?

John Scholten: Until we entered the market 15 years ago, most module trays were not being developed by horticulturists, but by people in the roofing industry. Since storm water management is one of the aims of green roofs, roofers were trying to figure out how they could store more water. Some of the early trays had drain holes located a half-inch from the bottom of the modules so that water would be stored in the bottom, which did more damage than good because the plants were frequently overwatered. It doesn’t make a lot of sense from a horticulture standpoint to store water in the soil, because you’re going to open yourself to diseases and other problems. Our tray is designed so that all the drainage is at the bottom of the module. Our module system has what we call positive drainage. Any water that does not get soaked up by the plants and the soil exits the system and goes to the roof drains, just like it would normally.

Irrigation Leader: What kind of plants can be grown on green roofs?

John Scholten: When we first started out, we were growing predominantly sedums in our standard tray, which is a 4¼‑inch-deep system. A 4‑inch system is standard in the industry. As architects have gotten more comfortable with green roofs, they have wanted more grasses, perennials, and other plants that require deeper soil, so we introduced a 6‑inch module, and we now also have an 8‑inch module. The natural progression from that was to ask whether we could grow vegetables on a roof. About 8 years ago, we had a commercial client that wanted to have a vegetable garden as a part of its larger sedum LiveRoof, so that was our first trial. The soil that we normally use in a green roof is highly inorganic—ideally, for a green roof you want 90 percent inorganic soil or more—but to provide adequate nutrition to a vegetable garden, you need organic soil. The problem is that as organic soil decomposes, it settles and compacts, which impedes drainage. Our solution was to take an engineered green-roof soil and mix it at about a 50‑50 ratio with a more conventional potting soil that contains peat and other compost.

Irrigation Leader: If the organic soil compacts gradually, do you need to top up the soil periodically?

John Scholten: You may have to add some different products over the long term. We recommend doing a soil analysis, which will tell you the porosity of the soil and whether you need to add anything. We’ve worked with the 50‑50 mix of soils for multiple years, and it works well. Since leaves and other organic materials remain, you may have to mix in more of the inorganic engineered soil to keep it close to the 50‑50 ratio that is suitable for growing vegetables.

Irrigation Leader: What kind of vegetables can be grown in green roofs?

John Scholten: Beans, herbs, lettuce, peppers, spinach, and tomatoes do well. Taller vegetables, such as corn, would not work as well because of the small amount of soil. Even with tomatoes, it’s wise to choose smaller varieties, because you’re only dealing with 6–8 inches of soil, which may not be sufficient for a plant that’s 3–5 feet tall. Beans and row vegetables are prime candidates for rooftops. We always tell people to grow the things that are more difficult to find in stores, so that they are using this valuable space to grow vegetables that they really want.

Irrigation Leader: What kinds of irrigation systems might your clients use for vegetable gardens on the roof?

John Scholten: Simple fan systems work well. They are available at most stores. It is best to hook up a simple hose timer to water the roof on a regular basis.

Irrigation Leader: Would you tell us about a successful project that your company has been involved with?

John Scholten: One project I can tell you about that incorporated vegetables was for the Interurban Transit Partnership in Grand Rapids, Michigan, which had green roofs and a walking track for exercise above its bus garages. To promote healthy lifestyles, it incorporated a vegetable garden. The vegetable garden didn’t get used enough, so the organization eventually discontinued it, but that shows how easy it is to incorporate vegetables in a green roof.

The other one I’m familiar with is at a corporate center in Chicago. The owner was really into vegetables. As far as I know, he still grows vegetables in his green roof every year. He loves the types of tomatoes and peppers that may be harder to source throughout the year.

We have provided thousands of successful LiveRoofs across North America. Many are sedum roofs, but each year, we do more roofs with ornamental grasses and perennials. One of them, a joint effort among the architects, owners, and LiveRoof, was the Frederik Meijer Gardens and Sculpture Park. We worked together to develop different plant mixes in the design so that it would have blooming plants all season long.

Irrigation Leader: What characteristics do you look for in determining whether a roof is suitable for a LiveRoof system?

John Scholten: The first thing we need to know about an existing roof is its loading capacity, as you don’t want to overload a roof. For a 6‑inch system that can grow vegetables, you’re going to need an additional 50 pounds per square foot dead load available to avoid any problems. Typically, our systems are installed on a flat roof, or what we call a low-slope roof, to allow for adequate drainage. For roofs that are used as amenity spaces, you would need an additional 100 pounds per square foot live load.

Irrigation Leader: Would you tell us about your RoofBlue RETAIN system?

John Scholten: As I mentioned, one of the reasons green roofs are popular is their ability to absorb storm water. Since storing storm water in the soil isn’t right from a horticultural standpoint, we developed the RETAIN system module to help with storage, but we also wanted to have the water available for the plants to use, so that’s why there is a wick in the module. The RETAIN module stores excess storm water below the vegetated module, away from the soil, and later wicks it up into the plants’ root system. When paired with the LiveRoof Standard System, the RETAIN system can increase storm water retention by 42 percent compared to the vegetated module alone. We’re doing testing this summer to figure out the extra benefits in terms of lowered irrigation that would be realized when plants are actively growing in the middle of the summer. We are trying to figure out how much water we’re going to save by using the RETAIN module for less-frequent irrigation cycles. We know it holds a lot more storm water over the entire year, but we also want to know the advantages in terms of lowered irrigation needs.

John Scholten: I think this pandemic has shown that people thrive when they’re in natural spaces. People want to live and work in buildings that offer outdoor spaces, especially in urban areas. When we incorporate plants into those outside spaces, people are happier, healthier, and more productive. I think we’re going to see many more green roofs in the future.

John Scholten is a product specialist at LiveRoof. He can be contacted at john@liveroof.com. 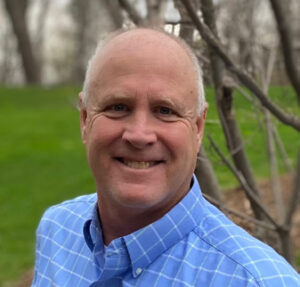