Dams have the potential to serve many of society’s needs: clean energy, transportation, irrigation, and flood control. But dams and hydropower can also generate controversy regarding conservation and river temperatures, which is often inflamed by misinformation. This often can hinder efforts to integrate hydropower into the renewable energy economy now being required by federal and state mandates. Northwest RiverPartners is a group dedicated to combating misinformation and educating the public about the comprehensive benefits hydropower can provide. In this interview, Northwest RiverPartners’ executive director, Kurt Miller, tells Irrigation Leader about the misconceptions the public often has about hydropower and dams, how dams can help further a clean energy economy in conjunction with wind and solar, and how the benefits of dams extend beyond energy into agriculture, and flood protection.

Kurt Miller: I’ve spent 30 years in the energy industry, including my last few years here at Northwest RiverPartners. I started my career at the Bonneville Power Administration (BPA), which is the region’s leading hydroelectric marketing agency. I also spent about 20 years at Portland General Electric, mostly on the power supply side. That’s where I really got a sense of how important the flexibility of hydropower is to helping us add other renewables like wind and solar power to the grid. A little over 2 years ago, this opportunity came up—the opportunity to essentially be a hydropower advocate for the region. With my background, I really understood how important the Northwest’s hydropower system was to communities, to agriculture, and to achieving our clean energy goals. It seemed like an amazing opportunity to me. I was able to get an interview, and I feel blessed that I was able to get the job.

Irrigation Leader: Please tell us about the history of Northwest RiverPartners.

Kurt Miller: The organization was established in 2005 as the Coalition for Smart Salmon Recovery. We still try to adhere to that name in a way. We definitely believe that salmon are in trouble and that there need to be efforts to help their population recover. We support making sure that those measures are grounded in science and that they don’t harm the communities that rely on the hydropower system and what it brings to this region. Initially, our membership was limited to public power utilities, meaning community-owned, not-for-profit utilities, that came together because of lawsuits around the operation of the Columbia River hydropower system. At the time, there was a lot of misinformation out there. A lot of claims against the hydropower system that were being shared in the media weren’t based on science or fact. After considering how important this resource was to the region and to their customers, the public power utilities founded our organization. As we started partnering more closely with agricultural and river transportation groups, we changed our name to Northwest RiverPartners. Today, our members include not only public power utilities, but also entities like ports and farm bureaus.

Irrigation Leader: Would you describe your main issues today?

Kurt Miller: A lot of what we have talked about recently has been the lower Snake River dams, because it seems battle lines have been drawn in the region, and there are a lot of nongovernmental organizations that are advocating to get those dams removed. We believe that the dams are incredibly valuable to this region. I think Representative Mike Simpson’s concept of breaching the lower Snake River dams and mitigating their loss with $33.5 billion of federal monies demonstrates the tremendous value the hydropower system brings to the people of the Pacific Northwest.

That said, the lower Snake River dams are not our only issue or even the main issue we want people to understand. What we want to help them understand is how the hydropower system has actually grown in importance over the last decade and will continue to grow in importance in this region. States are considering, and in some cases have adopted, 100 percent clean energy legislation. We know that the Biden administration is talking about making the grid carbon free by 2035. That means continuing to get rid of all the existing coal plants and eventually getting rid of all the natural-gas-fueled power plants. We need resources that are not only carbon free, like hydropower, but also flexible—resources that can move their output up and down to balance the fluctuations in wind and solar power. I think that a lot of people believe that the clean energy future will depend primarily on wind turbines and solar power, but they’re not thinking about how hydropower makes that future possible, especially in the Pacific Northwest.

Another thing we talk about is that the barging that the dams on the main stems of the Snake and Columbia Rivers make possible is the least-carbon-emitting form of transportation there is. The story is not just about clean energy; it’s also about clean transportation.

Irrigation Leader: Who are the main audiences for your advocacy, and what are your main methods for reaching those audiences?

Kurt Miller: We focus on the four Northwestern states: Idaho, Montana, Oregon, and Washington. Those are the areas that are served in part by the BPA. As part of our efforts, we have published over 40 op-eds in the past 18 months in regional media outlets. We also started a digital and social media campaign aimed at engaging and connecting with Millennials and Gen Z across the Pacific Northwest. Those are the groups that are least likely to know much about hydropower in this region. We have found that the more people know about hydropower, the more likely they are to support it. Our data showed that our campaign last year was really effective in helping people see the merits of hyperpower and making them more supportive of its use.

Irrigation Leader: Do your educational efforts also extend to the classroom?

Kurt Miller: Not yet, but we would like to move into providing education for college and high school students on these topics. I have given presentations to a couple of college classes, giving them a more nuanced picture of hydropower than they may have come in with. Right now, that’s something for the future.

Irrigation Leader: What are the biggest misconceptions that you’re trying to correct?

Kurt Miller: In Oregon and Washington, there can be a strong east-side-versus-west-side divide. The counties see themselves as red counties versus blue counties. One common misconception we’re trying to overcome is that hydropower isn’t for everyone. The truth is that it’s all tied together. We want people to understand that no matter where the dams are located, they provide value to the entire region.

Another misconception is that a megawatt is just a megawatt. A lot of people will say that the dams could just be replaced by wind turbines. I explain that the grid has to be kept in perfect balance between supply and demand every second of the day. If supply and demand aren’t in balance with each other, there could be cascading blackouts from Canada to Mexico. You need electricity to be produced exactly when you need it or else there can be disastrous consequences. The ability of hydropower facilities to hold water back and release it at the right time provides the flexibility to provide electricity exactly when it’s needed. Not only does that help you meet your demand precisely,

but it also helps integrate solar and wind power into the grid. Those resources tend to vary highly from moment to moment, so you need a resource that can go off when their output is spiking and ramp up when solar and wind power generation go down. Telling people about that is important.

Irrigation Leader: What kind of research do you support?

Kurt Miller: Salmon recovery is a huge issue here. Salmon is part of the identity of cultures across the Pacific Northwest. For the Native American tribes in this region, salmon is central to their religion, their economy, and their food security. Right now, salmon are struggling across the entire West Coast, including Canada and southeastern Alaska. We want to better understand why we are seeing widespread declines in salmon populations up and down the West Coast. A lot of scientists are saying that it’s a direct a result of climate change, which is warming our oceans, causing them to be more acidic, and in turn changing the balance between predators and prey. Several of our members who own hydroelectric facilities have fish biologists on staff. I’m not a biologist, so I work closely with that team to understand the latest scientific research and its implications.

Irrigation Leader: Would you tell us about your organization’s relationship with irrigation in the region?

Kurt Miller: Our focus is on hydroelectricity and dams. At the same time, the irrigation component is really important. We recognize that across the Northwest, the water in dam reservoirs enables the tremendous agricultural production that we have in many areas. We try to help people understand that many of these dams are multipurpose. They were chartered not just for hydropower, recreation, or flood control, but also for transportation and irrigation. We try to help people understand that the dams actually provide a lot more value than just zero-carbon energy; they also provide reliability in irrigation, transportation, and flood protection. These things are all part of the bigger picture.

Irrigation Leader: What is your vision for the future of your organization?

Kurt Miller: Our vision is that everyone in the region understands hydropower’s value proposition. There is no perfect form of energy, but the benefits that hydropower brings for clean energy, irrigation, and transportation are unmatched. With that more nuanced understanding, people can encourage policymakers to support policies that provide incentives to invest in maintaining and upgrading our hydropower resources. There’s a tremendous opportunity for grassroot efforts that support agriculture and hydropower in this region. There are so many people in this region that depend on both. We think there are some real equity issues that hydropower is needed in order to address. Hydropower in the Northwest is accessible to everyone because it is so affordable. As an organization, we’re seeking additional financial support for our digital media efforts. We’ve shown that they are effective. We also want to get more engaged with local community groups and events and formally engage with the K‑12 education system. These efforts will all require additional resources.

Hydropower is part of the solution to the challenges that the Pacific Northwest and other regions are facing. There can be some controversy around it, but the more scientific studies that come out, the more they point to the ocean as the primary indicator of what’s happening with salmon. If that’s the case, then hydropower is part of the solution, because it not only provides clean energy, it also helps us add other clean energy to the mix. We want people to know that if they have climate concerns, hydropower is probably the best possible option to address them.

Kurt Miller is the executive director of Northwest RiverPartners. He can be reached at kurt@nwriverpartners.org. 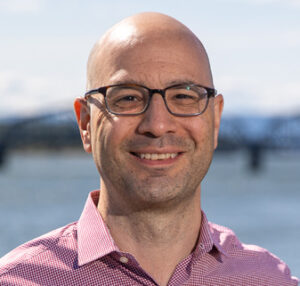