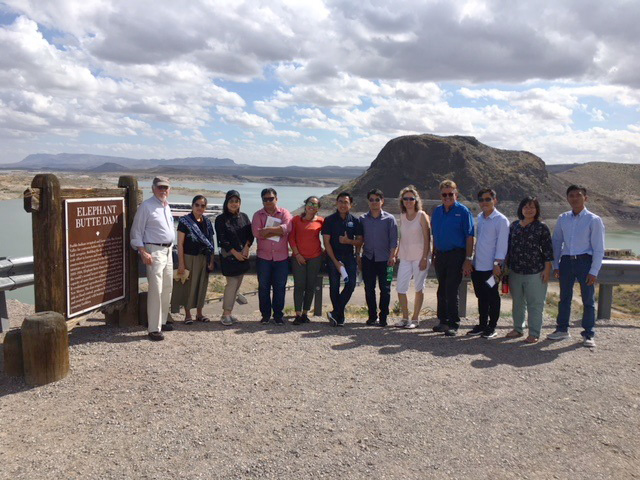 On the eve of southern New Mexico’s monsoon season, members of the International Leadership Visitor Program (IVLP), sponsored by the U. S. Department of State, spent the day with Elephant Butte Irrigation District (EBID) Treasurer/Manager Gary Esslinger and other water professionals learning about irrigation, agriculture, and environmental and water law practices.

The IVLP works with individuals nominated by embassies around the world who participate in professional exchanges to the United States. The theme of the YEAR tour was the Lower Mekong Initiative: Cross-Border Water Resource Management. The Lower Mekong Initiative (LMI) serves as a “multinational partnership effort initiated by the United States, Cambodia, Laos, Thailand and Vietnam in 2009 to promote and to foster integrated sub-regional cooperation and capacity building in the Mekong sub-region.”

Mr. Esslinger said, “They were interested in the fact that the federal government was not as involved in how we administer water in our area. The U.S. government built our system, but farmers paid it off; this was unheard of.” Also unheard of was Mexico’s million dollar repayment contribution in return for the 1906 water delivery treaty.

The participants saw a variety of crops grown and practices that are much different from theirs. They were fascinated by the pecan orchards—a new nut to them—and they were amazed to see field workers harvesting onions. “Does the government hire those people?” they asked. Mr. Esslinger replied, “No, the farmer does.”

An Albuquerque-based nonprofit, Global Ties ABQ, facilitated the tour. Spokesperson Destiny Logan explained the organization’s goal to create connections between visitors and New Mexicans. “This group’s objective was to talk about water sharing for multiple purposes because in that region, they are reliant on one river—the Mekong.” The LMI’s challenges in cross-border water rights are similar to our situation with Rio Grande water acquisition and delivery across three states and one country. Hour Thanit, vice chief of office in the Cambodian Ministry of Environment stated, “EBID is the model of water sharing with the specific amount of water from Colorado, New Mexico to Texas and to Mexico.”

Pham Thi Dieu My with the Centre for Social Research and Development in Viet Nam was interested in industrialization and climate change. Thi felt that EBID’s purpose “really matched with our risks in our home country. Topics of water management are the same [as] in the Mekong District.”

Dr. Phil King, EBID engineering consultant, described Rio Grande geography, explaining its origins in Colorado and its path through New Mexico and El Paso, Texas, to become the international border between the United States and Mexico.

Released water travels through the Hatch/Rincon Valleys, irrigating agricultural lands and producing a variety of key crops, from onions, pecans, and forages to our famous Hatch chile. It continues through the Mesilla Valley, enabling agricultural production there, then on through the Mesilla Diversion Dam in New Mexico to be shared with Texas. Below this, the Rio Grande becomes the international boundary, and travelers look across the Rio Grande into Mexico.

Dr. King said, “During the critical irrigation season, the two irrigation districts and Mexico often speak daily to stay apprised of the water situation.” SCADA monitoring data available on the EBID and EP#1 websites help all parties see where the water is in the system.

New Mexico is facing ongoing extreme drought. “The all-time record-low release occurred in 2013,” Dr. King said. “This river has massive swings in water supply.” The district creatively handles drought, including capturing stormwater that can be used directly for irrigation, to reduce the release from Caballo and deliver water to Texas and Mexico or to infiltrate and recharge the aquifer. This provides vital flexibility to producers. Mr. Esslinger described how farmers laser level fields, have on-farm practices like high-flow turnouts, and can apply 4 inches of water conservatively. A full supply is 3 acre-feet per acre, compared to 10 inches this year. “The way we irrigate and conserve water fascinated them; it’s different than what they are used to,” he said.

EBID works proactively with environmental groups and is in discussions with the International Boundary Water Commission (IBWC) to maintain the river channel for efficient conveyance, flood control conveyance, and establishment of wildlife habitat in the upriver channel. Dr. King said this long-term struggle to balance the river’s water use functions has developed into a plan to move the habitat out of the main river channel.

Samantha Barncastle (Salopek), EBID legal counsel, noted that LMI tour members were interested in the balance between human consumption/use of water and natural environmental water use. She explained, “In the western United States, you have a right to use water, although it is owned by the state and is subject to state and federal regulations and delivery obligations.” Water elsewhere is typically managed by government agencies within communities. The two primary federal regulations are the Clean Water Act regulating pollution and the Endangered Species Act covering ecological flow issues while also protecting human rights to use water.” Salopek acknowledged the question of balance. “We have to have water to survive, to drink, to eat, to provide for our children’s future. But at the same time, there is a benefit to letting the species use the water also.”

EBID’s endangered species of concern are the southwestern willow flycatcher and the yellow-billed cuckoo. The district developed a collaborative program to protect species called the Environmental Water Transaction Program. “Over the last 10 to 15 years, farmers have worked together with environment groups to make sure the species gets their water,” said Salopek.

Farmers are able to move water rights to different land parcels through a voluntary water rights transfer process. The policy allows e-farmers to order water like farmers and irrigate native vegetation to grow habitat for endangered species. Robert Faubion, EBID board president, said, “Water delivered to restoration sites will irrigate riparian shrub, woodland, and wetland vegetation. It is still agriculture, but we are just growing something different.” The Mesilla Valley Bosque State Park, west of Las Cruces along the Rio Grande, is one example.

Learning about New Mexico’s challenges in delivering water to not just EBID users but across state borders and to Mexico provided our international visitors with insights can take home and use to expand their own strategic discussions. One tour member commented that they will remember the “unique landscape and the importance of the Rio Grande for the people of New Mexico and Texas as well as Mexico.”

Karen Ray is a media consultant at Elephant Butte Irrigation District. She can be reached at ray.karen7@gmail.com.