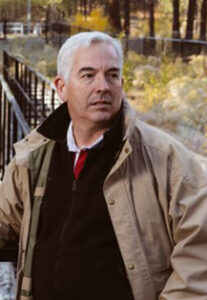 Marc Thalacker: Drought. Our snowpack is incredibly low. Last year, we probably had 100–110 inches on April 1; this year, we’ll probably have around 80. We’re only going to have water for a couple of months before we drop down to 30 percent. The advantages we have gotten by piping the whole district are amazing. Last year, which was also a drought year, we were able to deliver 100 percent until July 1. During the droughts in 1977 and into the 1990s, we could only deliver 10–30 percent.

Marc Thalacker: We’ve been working on a habitat conservation plan for 12 years, which is now completed. We had to develop a 30‑year plan so that we could deal with endangered steelhead and bull trout.

Marc Thalacker: Hiring personnel is difficult, but we’ve been lucky. I hire a lot of cowboys for the construction crew, and they’re jacks of all trades who do a good job. With our pressurized pipe system, we need fewer employees. It used to take ditch riders 8–12 hours a day, 7 days a week, to deliver water to our 80 customers. Now, we have 200 customers, and it only takes one person 3–6 hours to balance the pressurized pipe system.

Irrigation Leader: What training do you currently provide your employees?

Marc Thalacker: We do an annual Occupational Safety and Health Administration training each year with central Oregon counties, cities, and the Special Districts Association of Oregon (SDAO). There are usually two dozen or so different classes that the guys are able to select from. They learn flagging, CPR, safety, and equipment skills. In addition, the SDAO offers video training on topics such as sexual harassment and cybersecurity.

Irrigation Leader: How much do you spend on training each year?

Marc Thalacker: $4,000–$5,000. One of the advantages of being insured by the SDAO is that it provides a tremendous amount of training as part of its service.

Irrigation Leader: What kind of safety programs do you have in place?

Marc Thalacker: The district has a safety committee that meets monthly. We address everything from confined spaces to checking all rigging used in the field. We supply our employees with hard hats, safety vests, and other protective gear.

Irrigation Leader: What is the most important thing you have learned as a manager?

Marc Thalacker: Modernization is the key to survival. If we had not started modernizing 25 years ago, we would have been shut down last summer. We’ve eliminated 9 million kilowatt-hours of pumping costs for our farmers, which probably equates to $600,000 in annual savings, allowing them to invest money in pivots and farm equipment and plant higher-value crops. We historically had a 55 percent system loss; it was a no-brainer to start piping and to split the water between the farmers and the endangered species in the stream.

Marc Thalacker: Being a communicator. You need to get to know your customers. I’m lucky that I manage a small district, so I still have the ability to reach out and talk to each farmer individually. You also need to be a grant writer, to understand federal systems and laws, and to be an advocate at both the federal and state legislatures.

Irrigation Leader: What is the best way to work with a board of directors?

Marc Thalacker: I have involved my board in the education process. I have taken them to other districts that have modernized and to conferences. It is essential that they understand what’s going on both politically and financially. They have to be willing to invest the time to help make the district the best it can be. It’s a manager’s duty to excite their board members and get them attending conferences and learning.

Marc Thalacker is the manager of the Three Sisters Irrigation District. He can be contacted at manager@tsidweb.org or (541) 419‑5850.