Agrotonomy markets and builds vertical farming towers for clients around the world. Its simple technology drizzles a water-nutrient mixture over the roots of 20–50 plants per tower, allowing them to absorb exactly as much as they need. The towers can be deployed in commercial greenhouses, on rooftops, and outside. In this interview, Agrotonomy CEO Mathias Levarek tells Irrigation Leader about the benefits of Agrotonomy’s solution.

Mathias Levarek: Before getting involved in the vertical farming industry, I was involved in organic farming as well as information technology (IT). My work in IT financed much of my farming operations at that time. About 10 years ago, I exited the organic farming world and was looking for a solution for urban farming; I was living in Amsterdam at that point, having just moved from Hawaii. In my search, I came across tower garden technology, which at the time was mainly on the commercial side and hadn’t made its way into the residential market. Over the next few years, I became involved in hydroponic farming. Hydroponic vegetables look beautiful and can be calibrated to grow throughout the year, but are uniform in taste and texture, which is a downside.
When I returned to the farming world, I came across aeroponic tower technology. Initially, I was somewhat skeptical because aeroponics is in the hydroponic family. My main interest was the fact that the nutrient density was substantially higher in aeroponics, which led me to adopt it in my own home. Since my family eats mainly plant-based foods at home, the higher nutrient density that this technology could provide was enticing. I asked several inventors in the United States to take a chance on me and let me work alongside them, but I was initially unsuccessful. Then, I visited a tower farm in Sedona, Arizona, and met with the inventor. I was blown away. The tower farming solution saved 95 percent of the water and 90 percent of the space required by other methods, and the main perk, which I saw right away, was that it was the only agricultural technology that could deliver professional results without the owner having any professional experience. It’s simple and easy for me to set up for people around the world. Most of my clients don’t come from the farming industry, but they want to learn more about sustainable farming with a lower carbon footprint. We have tower farm projects all over the world, including in the Middle East, Southeast Asia, the Maasai Mara in Kenya, and Equatorial Guinea, to name a few. This technology makes that possible; conventional farming would not be an option in many of these cases.

Irrigation Leader: Please tell us about your company, Agrotonomy.

Mathias Levarek: Before becoming registered in Arizona, we were based in Spain and known under a different name, Ibiza Farms. Wanting to expand, we rebranded as Agrotonomy. Our company is small, with around 8 people, including agronomists, farmers, and people who do project development. We also have partnerships with different farms, so our extended team has around 30 people.

Irrigation Leader: Would you please describe how your technology works?

Mathias Levarek: It is an automated tower with its own irrigation system and nutrient dosing system, which supplies the right amount of nutrients and water to the plants on an as-needed basis. The system can be calibrated to the feeding needs of different plants. The towers are made of plastic but can withstand extreme temperatures. They are modular in size and can be up to 10 feet tall. The inside of the tower is hollow, and depending on the height, you can plant anywhere from 20 to 50 plants in each tower. The feeding mechanism is automated and turns on for 3 minutes and then off for 12 minutes. It drizzles a water-nutrient mixture from the top of the tower, providing the plants with the right amount of water and nutrients. The mixture goes up the tower and drips back down to the bottom reservoir, which contains 20–25 gallons. It is effortless to operate and manage.

Oxygen is the key for nutrient delivery at the root level. In regular hydroponics, the roots are immersed in a substrate and covered with water, whereas in aeroponics, the roots are hanging in the air and always have 100 percent availability of oxygen. This changes everything about nutrient absorption. The plants can absorb the amount of nutrients they need. Another incredible facet of this technology is that unlike hydroponics, which requires different nutrient formulas for rooting, vegetating, budding, and flowering, aeroponics uses one formula that adjusts based on what the plant needs. The device is also LEED approved.

Irrigation Leader: Are these towers almost always placed within greenhouses, or do people keep them outside?

Mathias Levarek: We have people using them in every scenario. We have them in commercial, climate-controlled greenhouses; indoors with artificial lights; on rooftops; and outside. Some of our towers have been used outside for 10 years.

Irrigation Leader: It sounds like your technology has been adopted in many areas around the world. Do you see any untapped markets where you think your product could help?

Mathias Levarek: Yes, there are some markets in which I would like to see our product in the future. For example, it would be great to implement this technology in places like retirement homes so that older folks can work with plants. Our technology doesn’t require any chemicals, it’s clean, and it doesn’t require much energy on the part of the operator. I think it would bring joy to the elderly, allowing them to connect with plants from seedlings to the full, mature plant as if they were in a real garden. I also feel that the towers should be in more schools around the country. Around 1,000 schools in the United States alone already have farming towers, but there can always be more. Lots of kids don’t know how food grows, and I also think that these towers can inspire children to invent the technology of tomorrow.

Irrigation Leader: What can you tell us about the energy demand of running these towers?

Mathias Levarek: The energy demand is low: Each tower requires about 55 watts and runs for about 12 minutes per hour, or around 5 hours per day. That amounts to around 270 watts—that is less than what is used by an office aquarium that runs 24 hours a day. Many of our systems, including our operation in Arizona, are 100 percent reliant upon solar energy, and most of our projects in Africa are fully off the grid.

Mathias Levarek: Business is expanding quickly in the agricultural manufacturing world, since many people fear for the future. I don’t really like seeing an increase in business based on fear, but that fear is making people a little more conscious about the subject of food security and is ultimately giving them more autonomy to do something about it. My hope is that efforts related to matters of food security are sustained past the pandemic. The vision I have for myself is to continue doing my work, one project at a time, around the world. 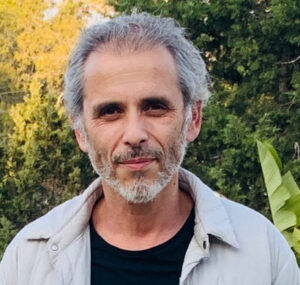