With its rich soil and abundant water, New Zealand’s Ashburton District has a thriving economy based on dairy farming and crop production. The 67‑kilometer (42‑mile) Rangitata Diversion Race is an irrigation and power generation scheme that diverts water from the Rangitata River to irrigate the district’s farmlands. In this interview, dairy farmer and district Mayor Neil Brown talks about local farmers’ contributions as well as their challenges, such as how to prevent nitrates from leaching into the aquifer.

Mayor Brown: I’ve lived in Ashburton District all my life. I went to Lincoln University and achieved diplomas in agriculture and farm management. I started off as an employee on a dairy farm and worked my up through the share milking system in New Zealand to eventually become the owner of my own dairy farms. In 2004, I decided to start giving back to the community and the district that had been so good to me. When the elections came around that year, I made the decision to put my name forward for election, and that became the start of my political career. I was elected to the council and remained a councilor until 2016, when I became the deputy mayor. In 2019, I was elected mayor.

Irrigation Leader: How has your experience being an irrigating farmer informed your role as mayor?

Mayor Brown: It makes me aware of the responsibility of using irrigation sustainably. Water is a valuable resource. While we have a plentiful supply in Canterbury Region, we are mindful of responsible usage. We certainly don’t want to waste it by irrigating unnecessarily, and to avoid that, we use technology such as water and soil moisture meters, rainfall data, and weather forecasting. This information assists us to know albeit minor; we have one of the main skiing locations in New Zealand, Mt. Hutt, on our back doorstep.

Irrigation Leader: Please tell us about the district’s irrigation systems.

We have a big irrigation canal, the Rangitata Diversion Race, that takes water from the Rangitata River. The purpose of this canal is to deliver a maximum of 34 cubic meters (1,200 cubic feet) per second of water from the Rangitata River to the three irrigation schemes located along the canal. These schemes then deliver the water to the farmers to irrigate an area of approximately 100,000 hectares. This delivery occurs through both open ditches and piped systems. The fall of the Canterbury Plains creates enough pressure to run the water in pipes without needing pumps. During the wintertime or when irrigation is not needed, the water is sent through to the Rakaia River, where it is used to generate electricity. The Rangitata Diversion Race was built in the 1940s during the Great Depression, and it was one of the best things that our forefathers did. It is the cornerstone of Ashburton District irrigation.

Irrigation Leader: What are the main irrigated crops?

Mayor Brown: Barley, clover, oats, pasture, peas, wheat, and processed and small seed crops. I am sure that with climate change, other crops that we don’t grow yet will be tried. We have 300–450 millimeters (12–18 inches) of soil that is sitting on top of hundreds of meters of shingle. It is so versatile that it lends itself to growing almost anything. In most areas, it is free draining, which makes it good for cultivation and stock but detrimental for the leaching of nutrients.

Irrigation Leader: What are the main concerns relating to water in Ashburton?

Mayor Brown: Its long-term availability. Who knows what a government will do to change the availability and allocation of water? The water is reasonably reliable at the moment, and irrigation allows us to meet reasonably consistent production targets every year. The only thing that could possibly affect us is a natural disaster, such as a wind, snow, or flood event.

Climate change is always in the back of our minds. Climate-change scientists are telling us that there will be a greater likelihood of higher rainfall events in the high country, higher flows in our rivers, and a drier climate. If climate change reduces the flow of water in the rivers, that would affect the reliability of our irrigation. We may have to mitigate that by building water storage. We currently have a project underway to store 53 million cubic meters (42,968 acre feet) of water supplied from the Rangitata Diversion Race. This water will be stored when it is not needed for irrigation. This storage pond is permitted, and if there is a willingness to build it, it will probably happen in the next 5 years or so. It’s an expensive project, but it may be needed to mitigate climate change.

Irrigation Leader: Who would build and own that storage structure?

Mayor Brown: It will probably be the irrigation companies. It’s in the feasibility stage now, and irrigation companies are discussing who would like to build it and who will pay for it. The storage capacity might end up being less than 53 million cubic meters, depending on what the demand for the storage is and who has the ability to pay for it. It could even be funded by private investors.

Irrigation Leader: What sort of obligations are local farmers under to ensure that their operations are sustainable and environmentally friendly?

Mayor Brown: We’ve got a national policy statement for freshwater management that sets a nitrate-nitrogen level of 2.4 milligrams per liter of water (2.4 parts per million). If you farm, you must have a Farm Environment Plan (FEP) with a nutrient budget attached. A computer program called Overseer calculates how many nutrients you leach from your property. The FEP has been around for approximately 5 years, and farmers are still coming to terms with it. The minister of the environment says that the farmers have a generation—which is suggested to be up to 40 years—to reach the 2.4 milligrams/liter level. This is going to be hard to achieve, but farmers are making progress. It will require research and development, but hopefully in the years to come, scientific methods will be developed to eliminate nutrient leaching down to the acceptable level. As an example, managed aquifer recharge is one of the methods being used to achieve this goal.

Irrigation Leader: Is there a good understanding between farmers and urban dwellers in Ashburton District?

Mayor Brown: In Ashburton District, there generally is. Most of the people in Ashburton District are connected with farmers, because their income comes directly or indirectly from farming. Nationally, urban dwellers don’t have a great understanding of what farmers are doing. Media reports point the finger at farmers and say they are polluters and that the waterways are polluted because of farming, particularly dairy farming. But farmers do a lot of work to prevent pollution, including riparian planting and the fencing of streams and waterways to keep stock out of these areas, and generally these efforts are not acknowledged. Farmers have held a few protests lately to show their displeasure to the government. One of the slogans of the protests is, “No farmers, no food.” Some city people think their food comes from the supermarket, not from the farmer.

During the COVID‑19 pandemic, huge amounts of money have been spent on wage subsidies all over the country. But farmers have carried on working right through the pandemic. The export earnings they produce will help pay back the debt that the government is accumulating. Some 95 percent of the produce that comes out of New Zealand is exported. Agricultural exports earn $80–$100 billion, which is a reasonable percentage of our gross domestic product.

Mayor Brown: I think the national and regional governments need to be more understanding of the farmers. They are doing a lot environmentally that does not appear to be recognized. The policymakers need to talk to the farmers at the grassroots level and hear what they have to say. Farmers need to farm and not get bogged down in bureaucracy.

Irrigation Leader: What is your vision for the future of Ashburton District?

Mayor Brown: To allow the district to flourish and provide an inviting place to work, live, and play for the betterment of all its residents.

Neil Brown is the mayor of Ashburton District. He can be contacted at info@adc.govt.nz. 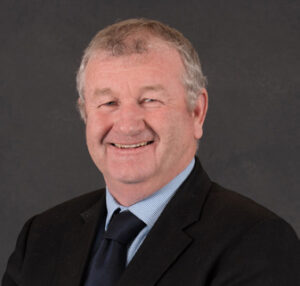