Menard County Water Control and Improvement District No. 1 (MCWCID), located in Menard County, Texas, manages an irrigation canal that was built by the Spanish in 1756. After being temporarily dewatered in 2013, the canal has experienced major seepage issues and now requires repairs. In this interview, Meredith Allen and Caroline Runge, the current and outgoing managers of MCWCID, talk to Irrigation Leader about the fascinating history of their canal and their plans to repair it and revitalize irrigated agriculture in Menard County.

Irrigation Leader: Please tell us about your backgrounds and how you came to be in your current positions.

Meredith Allen: I grew up on a ranch in Sutton County, not far from Menard County. I earned a master’s degree in water management from Texas A&M University. I was previously the manager of the Sutton County Groundwater Conservation District. When I moved closer to the Menard area, I was recruited by Caroline because she was looking to retire. Right now, we work as a team, with the plan that in the future she will retire and turn it over to me.

Caroline Runge: I grew up on a ranch in Presidio County and took a long, circuitous route to my current position. I went through law school, and in the 1990s, I attended the Water Resources Institute at the University of New Mexico in Albuquerque. I came back to this area of Texas in 1996. I was the manager of the Menard County Underground Water District from 1999 to 2010, and manager of MCWCID from 1999 until January 2020, when Meredith took over from me.

Irrigation Leader: Please tell us about the history of the district.

Caroline Runge: MCWCID was formed in 1955 with a view toward building a dam on the San Saba River to provide for irrigation. The permit for that project never came through, so we didn’t build the dam, and for many years, aside from helping people with their water rights, the district didn’t do much of anything. However, in 2016, the district acquired the water right for the Menard Irrigation Canal from the Menard Irrigation Company, which previously managed it. Operating the canal is the district’s sole responsibility. The district is a political subdivision of the state. We are funded through local tax dollars.

Irrigation Leader: Please tell us the history of the Menard Irrigation Canal.

Caroline Runge: The Menard Irrigation Canal has been in existence since 1756. Up to that point, the colonization of New Spain had stopped at the Rio Grande, but the Spanish government decided to colonize further north and chose this spot as the northernmost area it was going to occupy. There are three tributaries that come into the San Saba River just above the current city of Menard, so it was the area with the most water. In 1757, the Spanish constructed a presidio, or fort, just west of where Menard is today. The prior year, they had constructed the Menard Irrigation Canal, which we commonly refer to as the ditch, to irrigate the valley downstream of Menard and supply food to the presidio and the mission. The Spanish were incredible hydraulic engineers. Until we took it over, this ditch flowed for 10 miles using gravity flow. It has never used any pumps. It was constructed so that water flowed through it for about 3 miles before there were any irrigation withdrawals in order to build up pressure, or head, to carry the water all the way to the end of the canal.

The Comanches drove the Spanish away from this area around 1772, and for a little over 100 years, the ditch wasn’t in use. In 1874, a man named William Vaughn got a charter to use the ditch for irrigation and for a grist mill. He ran it until about 1886, when it sold to Gus Noyes. The Menard Irrigation Company, Inc., was formed in 1905, and its shareholders operated the ditch from 1905 until we bought the rights in 2016. The priority date for the ditch is 1905, when the company was created. We bought a total of 4,890 acre-feet of water right, which is about half of the total irrigation rights that are adjudicated in Menard County.

Caroline Runge: It was an unlined earthen ditch, and over more than 260 years of use, it had created its own alluvium; if it stayed hydrated, there was no problem with major deterioration. In 2013, during the bad drought years, the alluvium completely dried out. When we tried to reopen in 2014, it took about 5,000 acre-feet just to rehydrate the canal so that it would flow through back to the river. At that point, the shareholders decided to sell, and we bought the water right. We spent a couple of years going through the process of getting the bond passed and getting approval from the Texas Commission on Environmental Quality. Since then, because the alluvium has dried out so much, the canal has undergone serious deterioration. We have been working on repairs ever since. We cut off the last 3 miles of the canal and lined the new entry point to the San Saba River with concrete in order to conserve water. The irrigators at the end of the canal were the largest irrigators in the county. They switched to using to groundwater from the Hickory aquifer, which is over 2,500 feet deep and does not connect to the San Saba River.

Irrigation Leader: What is the current status of the canal project?

Meredith Allen: When the water rights were purchased, MCWCID thought it had enough money to complete all necessary repairs, but after those repairs were made, further issues arose: Without any water, trees along the ditch died and fell into the ditch, and then in 2018, massive flooding breached holes in the sides of the canal and deposited 40–50 tons of gravel in it. Financially, we have only been able to afford patches. There is a lot of seepage in the first mile or two, close to the river. We want to focus on that area. The district hired Ambiotec Engineering Group in September 2020 to perform a feasibility study on the first 2.5 miles to assess the issues and give us suggestions for improvements. Ambiotec presented its findings to the board in March 2021. Using the information provided, the district will now look for funding opportunities to complete the suggested improvements.

Irrigation Leader: What kinds of grant-making bodies are you planning to apply to?

Meredith Allen: We put out a request for proposals, and I think we’re going to try to get some advice from the engineering firm we work with. We don’t yet know what form our repairs are going to take, which is something that will influence where we go for grant funds.

Caroline Runge: We are also approaching some environmental organizations for grants, because improving the ditch would result in an immense amounts of water conservation. There’s been a lot of interest in this area in water savings on the San Saba River.

Irrigation Leader: Are there any kind of historical guidelines or restrictions that you have to operate under given the historical importance of the canal?

Meredith Allen: No, other than the fact that the community of Menard values the ditch and wants to preserve it.

Caroline Runge: We anticipate that there will be restrictions on what we can do to the section of the canal that goes through town. It runs through the middle of town, right past the courthouse, and it is a big draw for tourism.

Irrigation Leader: Who are MCWCID’s customers?

Meredith Allen: Because there is no water in the ditch right now, we do not have many, but all our customers are irrigators.

Irrigation Leader: What are the principal crops in the area?

Caroline Runge: Primarily hay and pecans. There is also a small amount of seed crops, such as oats. I am told the San Saba River Valley is the longest stretch of native pecans in the state. The area is well suited for pecans. It’s a big part of Menard’s agricultural industry. Of the 565,000 acres in Menard County, only about 2,000 are irrigated. This is typical rocky hill country, and almost all our irrigated acres are located in the San Saba River Valley, east of town. As a matter of fact, the northern boundary of the cultivable area is the San Saba River, and the Spanish built the ditch along the southern boundary of the cultivable area so that they could water all of it.

Irrigation Leader: What is your vision for the future of MCWCID?

Caroline Runge: Our vision for the district is to conserve as much water as we can and to preserve the viability of our irrigated agriculture. We also want to maximize the efficiency of the ditch. It’s important to us to protect the viability of agricultural production in this county. For the last 5 years, half our water rights have been shut down, so it is our top priority to get that up and going again. 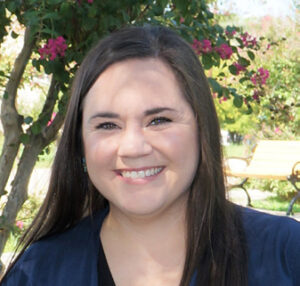 Meredith Allen is the manager of Menard County Water Control and Improvement District No. 1. 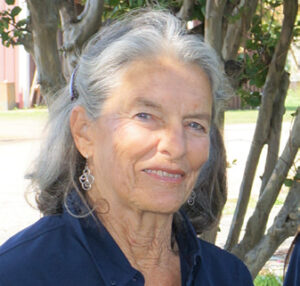 Caroline Runge is the former manager of Menard County Water Control and Improvement District No. 1.