Located in the heart of California’s Central Valley, Modesto Junior College plays an important role in training students to work in today’s agriculture industry. As part of that process, it promotes new agricultural methods and technologies. In this interview, Irrigation Leader speaks with agriculture instructor Ryan Patterson about Modesto Junior College’s irrigation and agriculture mechanics programs, which are giving students hands-on experience with new technologies, such as Rubicon gate systems.

Ryan Patterson: I grew up in Penn Valley, California, a small foothill community 2 hours northeast of Modesto. I’ve spent the last 17 years as a high school agriculture instructor, focusing primarily on agriculture mechanics, which includes welding, fabrication, electricity, plumbing, and various other mechanical skills. Over the past 6 or 7 years, I’ve also been an adjunct teacher at Modesto Junior College, where I work in the welding and agriculture departments.

Ryan Patterson: One word to describe Modesto Junior College is broad. The college can help students who want to take general education classes before they transfer to a 4‑year university as well as those who want to gain technical training, complete their associate’s degrees, and move directly into their careers. Other students attend Modesto to add to their skill set through a certificate program before starting a new job. Modesto Junior College is well known for the quality of our agriculture and environmental sciences department, which includes ag mechanics, plant and animal sciences, and horticulture.

Irrigation Leader: Would you tell us about the demonstration farm at Modesto Junior College?

Ryan Patterson: The farm is the home of our production beef, dairy, swine, and sheep units as well as an equestrian unit. On the back corner of the pasture, along the canal, is our irrigation unit, which includes a holding pond with four pumps and two filter systems. We have a full solar setup and a submersible pump running off 100 percent solar energy or, if need be, a utility power unit provided by Modesto Irrigation District. All our pumps are controlled by variable-frequency drives and have sensors to monitor pressure and flow for each pump output. The unit is constructed to run any type of irrigation system commonly found in California on a small scale. The newest system includes the Rubicon high-performance surface irrigation system. We installed a Rubicon SlipMeter; Rubicon BladeValves; a gateway, which is a communications device; and a weather station. We converted our existing flood-irrigated pasture to the Rubicon BladeValve system.

The farm, the irrigation system, and the agricultural pavilion are on the West Campus. The pavilion is a central meeting place where the college holds livestock shows, tractor pulls, fundraiser dinners, and other community events. The pavilion also holds our plant and animal science classrooms, a full kitchen, a lobby, and meeting areas. Our welding and power mechanics classes are taught on the East Campus, along with our agricultural business and environmental science classes. I teach a variety of agriculture mechanics classes, including welding and agriculture fabrication, as well as irrigation and drainage classes.

Irrigation Leader: Does the Rubicon system on campus use the FarmConnect software?

Ryan Patterson: Yes, the Rubicon system is on the FarmConnect software. The BladeValves are all individually connected directly to the gateway system. The BladeValves have a battery pack and a FerIT Solar Node, so they remain charged and able to communicate with the gateway, which is located on top of the holding pond. The gateway is an Internet-based device that receives weather data from the Rubicon weather station and regulates the BladeValves and FerITs. In the future, our gateway will be able to monitor soil moisture.

The other part of the system is the SlipMeter, which is installed directly into the canal. The SlipMeter is a computer-controlled Rubicon product that operates by tilting a gate open a certain number of inches to set an appropriate flow rate. This morning, we’re running our system at approximately 16 cubic feet per second (cfs) through 4 BladeValves (traditionally, we would run 16 cfs through 16 valves). The SlipMeter allows our farm manager to adjust the flow rate, and depending on the ditch level, the gate will open or close to maintain that flow rate.

We also use a web-based program called FarmConnect that sets an irrigation schedule, so we can adjust timing, manually open and close valves, and monitor soil moisture. This tool predicts irrigation needs based on weather patterns, soil moisture, and plant transpiration rates. FarmConnect is working toward creating a completely automated program to schedule SlipMeter openings online; however, we currently open the SlipMeter manually.

Irrigation Leader: What are you learning about the Rubicon system?

Ryan Patterson: There’s only one other BladeValve system in the United States, so I’m excited to see the results of this automated system. Efficient water usage is extremely important in California. We applied for and received a grant to install the Rubicon system. Being centrally located, our campus was a great place to experiment with the new concept of high-velocity surface irrigation. We are excited to see all the technology perform.

Recently, we retrofitted an existing 30‑inch pipeline from the 1950s. We experienced some challenges during that process. But Rubicon claims that its system and high-flow-rate method irrigates more efficiently and uses less water. Traditionally, we open all 16 valves, let the water run for 3–4 hours, close the valves, and lower the gate on the ditch to keep the pressure equalized. With the Rubicon system, we’re still running water at the same rate, 16–18 cfs, but we’re pushing it through 4 rather than 16 valves, meaning that the velocity of the water is much higher. The water pushes across the check more quickly, which means there is less waterlogging at the beginning of the field and a more consistent distribution of water across the check. During the first couple of irrigations, we replicated the method we’ve used in the past to review the system a second time. We discovered that the water moves through the pasture more quickly; we’re able to push water faster; and the overall irrigation time is decreasing, meaning we’re using less water. That is essential in California, since we’re faced with this drought. In the past, flood irrigation demonstrated 40–50 percent usage efficiency, but Rubicon claims that it has reached 85–90 percent. Rubicon originates in Australia, but the company is modifying some of its technology to work in the Central Valley environment. Although we’re learning along with Rubicon, we’re excited to take part in this process as we adjust to its retrofit system. The company’s representatives accept input well and make necessary changes to the program when we ask. We’re thankful to be able to work with Rubicon, and we’re excited to continue developing this relationship.

Ryan Patterson: I think a big part of education is being attuned to industry trends. Students need to learn about what they will see when they enter the workforce and learn skills that are viable for their industry. When choosing the technology that should be incorporated into a learning environment, we need to ensure that it is accepted by the current industry. Our students are more receptive to technology than many in older generations, simply because they’re more accustomed to using it. They recognize the benefits that come along with efficient technology—water conservation, lower water costs, and lower labor costs.

Ryan Patterson is an agriculture mechanics instructor at Modesto Junior College. He can be contacted at pattersonr@mjc.edu. 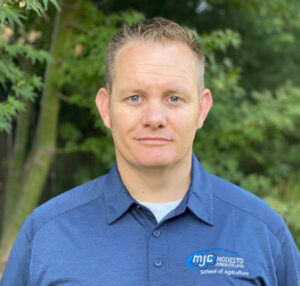