Stormwater360 is a New Zealand company specializing in reducing plastic and other storm water contamination in waterways. It is also active installing green roofs across New Zealand, which dispose storm water and wastewater and can provide other environmental and operational benefits. In this interview, Stor

Stormwater360 is a New Zealand company specializing in reducing plastic and other storm water contamination in waterways. It is also active installing green roofs across New Zealand, which dispose storm water and wastewater and can provide other environmental and operational benefits. In this interview, Stormwater360 Director Greg Yeoman tells Irrigation Leader about one significant project at Mount Difficulty winery on New Zealand’s South Island.

Irrigation Leader: Please tell us about the green roof you constructed for Mount Difficulty winery.

Greg Yeoman: We have licensed the LiveRoof technology for green roofs in New Zealand and have installed it in a number of projects. The one at Mount Difficulty is the largest extensive living roof in the country. It was installed to achieve a number of environmental outcomes. The winery needs to dispose of wastewater from the winemaking process, and it uses it to irrigate this 900-square-meter (9,687-square-foot) roof. The plants on the roof then transpire and use that water, and by doing so, they cool the barrel stores, which are effectively dug into the hillside. The climate is quite warm, but because this evaporative cooling method regulates the barrel store temperature so effectively, the winery doesn’t have to expend energy artificially cooling it. Seeds from the plants are also used on the roof to regenerate the hillsides around the site. A number of years ago, there was a gold mining town there, and the miners sluiced the hillside looking for gold, leaving it barren and desertlike. The winery is regenerating it using native plants. The wine tasting room and restaurant sit at the top of the hill and look down on the green roof as well.

A number of the green roofs in New Zealand that have been constructed in conjunction with LiveRoof were intended more for aesthetics than for functional benefits. Unfortunately, storm water control regulations incorporating green roofs in New Zealand aren’t very strong, and because green roofs are expensive to install, they are uncommon. However, they provide more benefits than rain tanks. Rain tanks catch water, but they don’t have cooling properties or biodiversity benefits.

We’ve completed some fantastic projects and have been able to develop our own media locally. As part of our storm water business, we make different growing media that are free draining, so they’re capable of allowing big storms to go through them but also hold onto the water that is necessary to sustain the life of the plant. For example, if we have only 150 mm (6 inches) of media for a plant to grow in, it has to be lightweight and permeable and remain free draining for its lifetime, but it must also be able to sustain plant growth. In New Zealand, we use pumice as a base ingredient, which is fantastic because it can lock water away and keep it for plants later. We’ve developed the system locally and worked closely with Amber Ponce of LiveRoof for a lot of these projects.

Irrigation Leader: Did you also develop the irrigation system for the Mount Difficulty roof?

Greg Yeoman: We worked on that with local irrigation specialists. Irrigation is not one of our specialties, but it’s important for shallow living roofs, because the vegetation can get stressed or die during prolonged drought events, and green roofs are expensive to replace if they fail. The ideal solution is to work with an onsite water reuse system that draws from a rain tank or an underwater rainwater storage system from a car park or another structure. If customers can reuse that water on the green roof in summer, they dispose of it while also achieving evaporative cooling. That’s the ultimate win-win scenario.

Greg Yeoman is the green infrastructure director at Stormwater360. He can be reached at greg@stormwater360.co.nz. 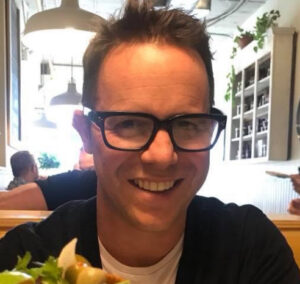