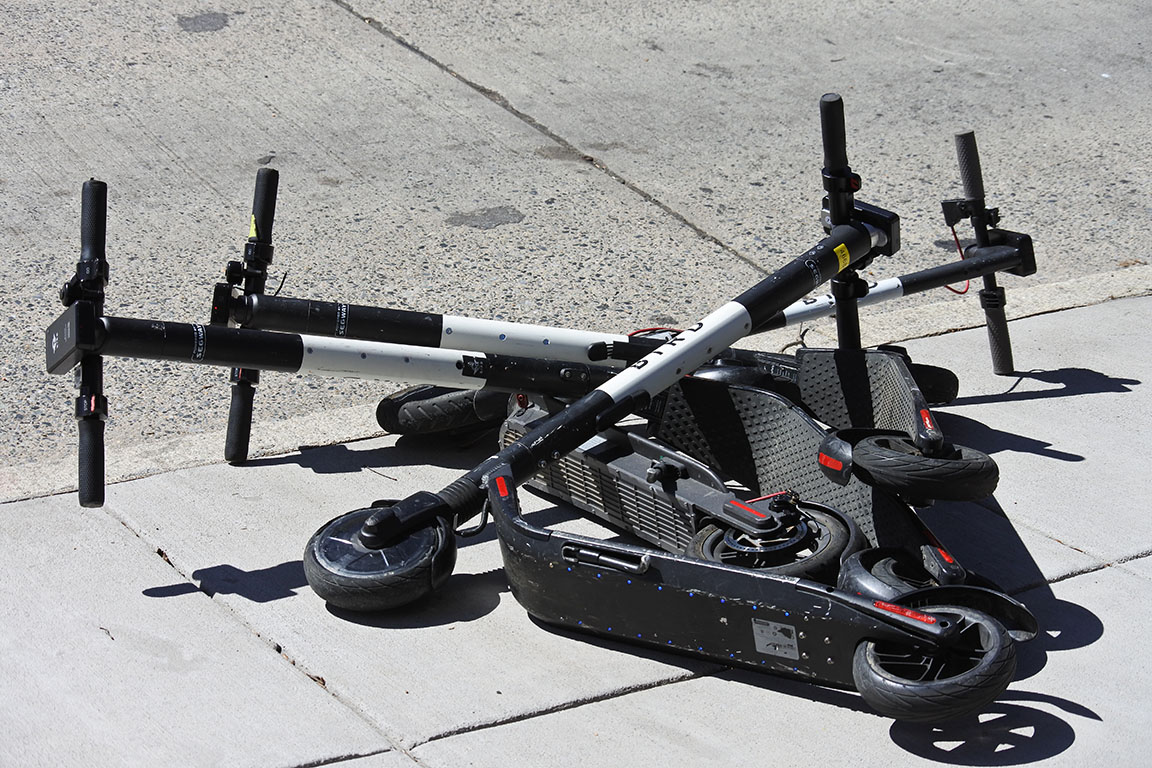 By now, residents of most cities in the United States are familiar with the electric scooters that have sprung up like mushrooms on every street corner. While they are convenient and quick for commuters, they pose an annoyance, a liability, and a hazard for canal owners. Arizona’s Roosevelt Water Conservation District is one agency that has had problems with these scooters.

In this interview, RWCD General Manager Shane Leonard speaks with Irrigation Leader Editor-in-Chief Kris Polly about the recent spike in scooters being thrown into his agency’s canals and the massive headaches and possible lawsuits they are causing.

Kris Polly: Please tell us about your issue with scooters and rental bikes.

Shane Leonard: The problem is that our canals and open conveyance systems have become a dumping ground for everybody who does not feel like paying the bill for their scooters. We have collected between 50 and 100 of them from our canals. If I understand correctly, in order to use one of these scooters, you enter your credit card information into a crediting system, and when your allotted time runs out, the scooter locks up. People who don’t have anything else to do are figuring out ways to make these things run when they’re not supposed to, but the scooters still have GPS tracking systems. When these people get where they want to go, they throw the scooter in the water so that everything fritzes out. One of the things that we’ve gotten concerned about is that the scooters are battery operated. Chemicals leach out of their battery packs into the water.

The scooter companies don’t seem interested in collecting them and the state doesn’t regulate them. When you call a scooter company and ask it to come pick up its scooters, and also tell it that the scooters got lodged underneath a gate and caused damage, it says that the lack of regulations exempts it from damages. One company actually wanted us to pay for damages to its scooters on the theory that if our canals weren’t there, they wouldn’t have been thrown in. It wanted us to replace all of them.

In my personal opinion, it’s a bad idea to give folks unfettered access to motorized, battery-operated pieces
of equipment without a code or theory on how to collect them. It’s no wonder that people throw them away. The lack of regulations is a problem for local cities and towns too.
A municipality around here was hit with a Persons with Disabilities Act lawsuit because scooters were left on ramps and sidewalks and folks in wheelchairs couldn’t get around them. People also use the scooters in places where they’re not supposed to, like our canal banks.

Kris Polly: Has anybody fallen into a canal while riding a scooter on its banks?

Shane Leonard: Not that we are aware of. That question is
a lot like another one we are often asked: How many people get into our canals and get out without a problem? We don’t know, because people don’t call us up to tell us that they
were trespassing. Typically, we find the scooters after they’ve moved down the bigger canal systems and gotten wedged underneath a gate or gotten trapped in a fish grate or trash rack. These things aren’t light. I have guys out there straining themselves physically trying to pull them out. Eventually, we have to send out a piece of equipment to pull them out using a chain or rope. It costs several hundred dollars in equipment and labor costs to pull a worthless scooter out of the system and stock it.

Kris Polly: Do people throw other stuff into the canals?

Shane Leonard: Oh, yeah. Some of the things are what you would expect, like shopping carts, but we have even found artificial limbs. One thing that freaked us out a year or two ago was that somebody had thrown a mannequin into the canal. We found it during a low-flow period, after it had been in the canal for a year or two accumulating sediment.

Kris Polly: Are you aware of other water providers having problems with the scooters?

Shane Leonard: I know Salt River Project has the same
issue; so does everybody who’s got a canal system in the metro area. These scooter companies are trying to get into high-population areas. When they first showed up, it seemed that they were being dropped off in clusters. There might be 10 or 12 at an intersection. The first time we saw them in our canal, it looked like somebody had literally gone to the corner where all the scooters were, put them in their vehicle, gone 300 feet east, and thrown them all in our canal. Maybe it was kids having a joke, but that’s a lot of work just for that. I’m thinking it could have been somebody who didn’t like the fact that the company had just dumped the scooters out on the sidewalk. It could also have been a rival company.

Kris Polly: What policies have you and your board adopted to deal with this situation?

Shane Leonard: It is somewhat informal. Someone who pulls a scooter out of the canal submits a field report, and those field reports go through the normal process of review. Since there is no standard of care, state policy, or state licensing associated with these scooters, however, I have my employees send the reports to me. I’ve got contact information for all the scooter companies that are operating in the area. I call them up and say, “All right, we’ve got 8 of your units. You’ve got 5 days to come collect them or I’m going to dispose of them.” More often than not, they say, “Those are ours. You can’t do that.” I ask them to come get the scooters. They tell me to put them out on the sidewalk. I refuse, because if I do that, they are going to end up right back in my system.

Kris Polly: Do you throw them all away eventually?

Shane Leonard: Eventually. As I mentioned, we’ve pulled out 50–100 scooters within the last 18 months. The company that picks up our trash will deconstruct them and dispose their different elements, including the battery components, appropriately. I believe there have been two situations where a company has come to collect a couple. But in those cases, the person who shows up sifts through the scooters and grabs the ones that might still be serviceable and then tells me to do what I want with the rest. Why is it my responsibility to get rid of their trash?

Paul Brierley is the executive director for the Yuma Center of Excellence for Desert Agriculture. He can be contacted at paulbrierley@email.arizona.edu.