Arizona and the West are facing the worst drought in 1,200 years. Below-average snowpack and dry soil conditions in the Colorado River basin are reducing water availability for farmers, ranchers, businesses, and communities.

This issue is a priority for me because Arizona is on the frontlines of this megadrought, and we need leadership at all levels of government focused on ensuring that our water supply can keep up with our growth and maintain the agricultural economy that feeds the country and creates good-paying jobs.

That’s why, in March, I spoke at the Senate Committee on Indian Affairs alongside Colorado River Indian Tribes (CRIT) Chairwoman Amelia Flores in support of legislation that would enable her tribe to assist Arizona in managing this drought.

In many instances, tribal nations are among those most vulnerable to the effects of prolonged drought. At the same time, tribes hold significant water rights that can position them to lead on water conservation and drought management.

For example, the Gila River Indian Community recently led efforts to team up with water users in Arizona, Nevada, and Southern California. In December, the groups announced the first-ever plan to conserve 1 million acre-feet of water in Lake Mead over the next 2 years.

The initiative, known as the 500+ Plan, is ambitious, but it demonstrates the role that tribes can play in promoting a secure water future. Congress can and should support more groundbreaking partnerships like the 500+ Plan.

This is where the CRIT can play a role. The CRIT are located along the banks of the Colorado River, where they have farmed for thousands of years. In 2005, the Supreme Court quantified their right to nearly one-quarter of all Colorado River water allocated to Arizona.

Today, they farm across roughly 80,000 acres of tribal land, using an irrigation system built mostly by the Bureau of Indian Affairs (BIA). It is one of the oldest tribal irrigation systems in the nation.

I’ve visited their farmland and seen the BIA infrastructure. Significant amounts of water are being wasted by a failing flood irrigation project. In some places, you can see water leaking through hand-dug dirt canals.

The CRIT need to modernize that system, but they lack the resources needed to line canals and install water-efficient infrastructure, such as drip irrigation systems.

My bill, the Colorado River Indian Tribes Water Resiliency Act, would enable the CRIT tribal government to lease a portion of its water for off-reservation purposes. The water can be transferred for water storage, habitat conservation, or use by Arizona communities that need it as the drought gets worse.

The revenue from those transfers would then be reinvested into the CRIT’s farming operations for repairs and water efficiency upgrades. This investment will pay dividends. The more water the tribes conserve in their farming operations, the more they can make available for transfers.

This legislation is not a comprehensive solution to drought, but it would be a new tool in ongoing efforts to build drought resiliency in Arizona.

My bill was developed following a series of public meetings held across the state and organized by the Arizona Department of Water Resources.

It is unanimously supported by the board of the Central Arizona Water Conservation District and is also backed by the leadership of the Salt River Project, valley communities, and rural counties.

I am grateful that the Roosevelt Irrigation District, which has been a leading water provider in the valley for nearly 100 years, is also behind our legislation. Other irrigation districts that use water from the Colorado River can be helpful in supporting this bill, too.

This can be one of many tools that we deploy to help our state manage drought.

I was also part of the group of Republicans and Democrats that wrote the Bipartisan Infrastructure Law, which is fully funding repairs to Bureau of Reclamation transferred works projects, is laying the groundwork for the expansion of Bartlett Dam, and provides a tenfold increase in grants under the U.S. Department of the Interior’s WaterSMART program.

The law also fully funds the Lower Basin Drought Contingency Plan, which is already being deployed to conserve more water in Lake Mead.

There is still more work to do, including increasing federal support for water recycling and large-scale desalination projects, including the project under consideration at the Sea of Cortez.

The real-time effects of drought are serious. At the same time, there is no country in the world that is better at solving problems when we put our minds to it than the United States. What we need are innovative, collaborative solutions to make Arizona more resilient to drought and to ensure that our state continues to prosper.

Mark Kelly is a United States Senator from Arizona. For more about Senator Kelly, visit www.kelly.senate.gov. 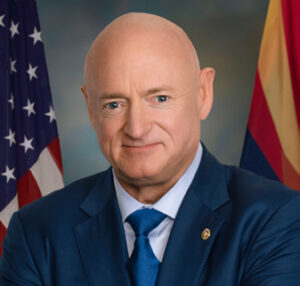