Kennewick Irrigation District (KID), a central Washington irrigation district with roots that stretch back to the late 19th century, is lining its canal system. Irrigation Leader speaks with Jason McShane, KID’s engineering and operations manager, about how this initiative will save water and increase the district’s storage capacity. He also tells us about how an Irrigation Leader–sponsored trip to New Zealand gave him ideas for the design of a future reservoir for the district.

Irrigation Leader: Why is KID lining its canals?

Jason McShane: KID lines its canals for a variety of reasons. One of the major ones is to improve public safety by installing impervious liners that make the canal embankment more stable. Another important reason is to conserve water, allowing us to reduce the amount of water needed for KID’s water delivery. These benefits improve KID’s drought resiliency and benefit instream flows. We have been fortunate to complete most of our lining projects in partnership with the Bureau of Reclamation through the WaterSMART program.

Irrigation Leader: Does KID plan to line its entire canal system? If so, when will it be completed?

Jason McShane: KID is currently lining its principal canals. The process started in earnest in 2012. We have lined the majority of the system and each of our sublaterals. We have about 5–6 years of lining work remaining.

Irrigation Leader: How much lining can you get done per day?

Jason McShane: Our smaller canals can be lined at a rate of hundreds of feet per day under favorable conditions. There are two major factors influencing how much lining gets installed: time and weather. One thing people don’t recognize is that construction can only occur during our off-season, which is typically mid-October to April 1. The process of lining a canal is also weather dependent, meaning it can only be done when it’s warm enough, the wind’s not blowing, and it isn’t raining or snowing. A tremendous amount of effort goes into preparing the canal for lining so that lining teams are able to install as many feet as possible when the weather permits. When we do have favorable weather, we can generally line up to 1,000 linear feet in a day, with our best day being about 1,800 linear feet.

Irrigation Leader: Why don’t you just pipe the canal system?

Jason McShane: Piping canals can be a real benefit in terms of regaining and capturing the amount of energy in the water; however, we found the ability to line the canals in their current state provides for water storage in addition to water conservation. Piping the canal system is also quite challenging from a cost perspective. We have found that lining the canal is more cost effective than piping. Oftentimes, people talk about the importance of eliminating evaporation by piping open canals, but evaporation is a small percentage of the total water loss in a canal system.

Irrigation Leader: How durable is the liner, and how often does it need to be replaced?

Jason McShane: KID uses a 60‑mil MicroSpike high-density polyethylene (HDPE) produced by AGRU America. This product has a good strength-to-weight ratio and good ultraviolet light resistance. In 2013, KID toured sites where various lining types had been installed as part of a 1980s and 1990s Reclamation demonstration project. At one of these sites in Bend, Oregon, we reviewed the installation of 22‑year-old HDPE exposed lining. Its condition was very similar to that of newly installed lining today. We are grateful for Reclamation’s demonstration project because it gave KID a 20‑year look ahead to see when we can expect to need to replace the lining.

Irrigation Leader: What is the purpose of widening your main canal?

Jason McShane: As KID developed its canal-lining program, we have found a real benefit in taking advantage of the overexcavation that has happened through the years during the cleaning and dredging of the canals. Rather than committing the time, effort, and expense to build the canal prisms back to their original state, we instead line the canals in their existing state and add control structures that provide additional water storage to our facilities at a reduced overall project cost.

In the case of our main canal widening project, we determined that increasing the elevation of the embankment of the canals to harness more potential energy in the water could be achieved by utilizing the material gained by widening the canal. Widening the canal would also increase our water storage capacity by 200–250 acre-feet. This stored water will benefit the entire KID community.

Irrigation Leader: If you need additional storage, can you widen your other canals?

Jason McShane: When we talk about KID’s storage needs, I have to express appreciation to Irrigation Leader for providing the opportunity to tour New Zealand’s irrigation projects. During that tour, we had the opportunity to see what New Zealand irrigators are doing to improve their water supply issues. In the summer months, New Zealand farmers are often only able to divert irrigation water from the river following rain events in the mountains. These rain events can come in quite high intensities but are not always consistent. Therefore, New Zealanders needed to find ways to divert and store water during those high peak flows. This is very similar to what we think we’re going to experience in our region as we go forward, specifically in climate change scenarios that show more rain and less snow in the future. Our challenge at KID is the reduction in our ability to take water out of the river during times of drought. We need to have the ability to divert water into KID’s system when the river is high, to store that water, and then to allow it to be used during periods of low supply.

One of the projects we toured in New Zealand was the Carew Ponds in the MHV Water irrigation scheme. These storage ponds are constructed in three cells that cascade down in elevation. Water diverted from the canal goes through the three cells and is able to reenter the canal at a lower elevation due to the steep grade the canal follows. This water augments the supply in the canal without using any pumps. It represents significant cost savings in both operational maintenance and electricity.

As we headed further south on the tour, we saw massive canals built across the landscape on fairly flat ground, and I thought to myself, “Why can’t we create canals that would create the circumstances to allow for a gravity-in/gravity-out reservoir?” Of course, in our district, the canals are really flat, and the slope is about 1 foot per mile, while the slope of the New Zealand landscape is something like 36 feet per mile. Because of this, we had to create our own elevation change for the canal system. This also meant that gravity-in/ gravity-out storage would require a reservoir with a large surface area. KID’s main canal widening project creates additional differential elevation in preparation for a gravity-in/gravity-out reservoir that could be as large as 12,000 acre-feet, or about enough water to fill 120 Empire State Buildings, with approximately 2,400 acre-feet of gravity-in/gravity-out storage.

Fun Fact: HDPE lining, when it’s buried, has been used to line cells to control radioactivity leaching into the groundwater. That’s how durable it is.

Jason McShane, PE, is the engineering and operations manager for Kennewick Irrigation District. For more about KID, visit kid.org. 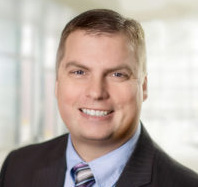