The San Luis Valley Irrigation District (SLVID) services 62,000 acres of agricultural land in south-central Colorado with water rights on the Rio Grande that date back as far as 1887. Today, the San Luis Valley and the Rio Grande as a whole have been experiencing a serious drought for close to 20 years. In response, farmers in the valley have collaborated to reduce water use and replenish local aquifers. In this interview, SLVID Superintendent Robert Phillips tells Irrigation Leader about how the district is responding to these challenges on the upper Rio Grande.

Robert Phillips: My parents began their careers as farmers in the San Luis Valley in the 1950s and eventually moved into the education sector in the nearby schools. I grew up in the town of Center, where the SLVID office is located. I graduated from Center High School; received a bachelor of science in agriculture from Iowa State University in Ames, Iowa; and earned a master’s degree in water resources at the University of New Mexico in Albuquerque. I have worked for the Colorado Division of Water Resources in divisions 2 and 3 in the positions of water commissioner and reservoir operations specialist and as a physical science research scientist. While in division 2, I worked for division engineer Steve Witte and became familiar with the Arkansas River and agricultural producers in that area. In division 3, which encompasses the Rio Grande basin and the San Luis Valley, I worked for division engineers Steve Vandiver and Craig Cotten as the water commissioner and as a physical science research scientist. I then moved on to be a program manager at the Rio Grande Water Conservation District (RGWCD) and managed the first groundwater management subdistrict in the San Luis Valley for 6 years. In 2018, I was offered the superintendent’s position at the SLVID and have been here ever since.

Irrigation Leader: Please tell us about the SLVID.

Robert Phillips: The irrigation district was formed on December 10, 1908. It comprises 62,000 acres of farmland in the central and northeastern parts of the San Luis Valley of south-central Colorado. The SLVID owns the Farmers’ Union Canal, which diverts water off the Rio Grande and provides surface water supplies within the SLVID service area for irrigation and recharge purposes. The canal has direct-flow water rights from the river dating as far back as April 1, 1887, and as recent as June 30, 1893. The district has a total of nine direct-flow water rights in the canal, adding up to a total diversion rate of 800 cubic feet per second when all the water rights are in priority.

The irrigation district still services 62,000 acres of agricultural lands within its service area boundary with surface water supplies from the Rio Grande. The SLVID owns and operates 135 miles of laterals within the service area and serves approximately 180 farms. Our financial resources are generated by annual assessments based on a per-acre land-water assessment. We are governed by a five-member board of directors, have four full-time employees, and are open for business year-round. We manage the SLVID ourselves and have our own heavy equipment to maintain our rights of way.

Irrigation Leader: Is your primary source of water the Rio Grande?

Robert Phillips: That’s correct. The SLVID has both direct-flow and storage water rights on the Rio Grande. We can divert water from the river as the direct-flow water rights owned by the SLVID come into priority. The SLVID also has water storage decrees for the reservoir, which can come into priority during the early summer runoff of the river and during the winter months of the nonirrigation season. The Colorado State Engineer has designated the period from April 1 through October 31 of each year as the irrigation season in division 3, which encompasses the Rio Grande basin. The nonirrigation season, November 1 through March 31, is usually the time when the precompact reservoirs in division 3 can store water. Precompact reservoirs are reservoirs that were constructed before the 1938 Rio Grande Compact came into force. The nonirrigation season is the primary time of the year for the district to take advantage of its decreed storage water rights.

Irrigation Leader: How have the drought conditions on the river affected the district and its customers?

Robert Phillips: Streamflow data suggest that the Rio Grande has been experiencing a drought since 2001. The data also illustrate that the total water diverted into the Farmers Union Canal for the last 20 years is 75 percent of the total water diverted during the 20 years prior to 2001. To fully grasp the meaning of the data, you need to understand the hydrology of the San Luis Valley. The farmers in the SLVID derive irrigation water from a big system that includes water supplies from both ground and surface water. The components of that big system are the Rio Grande, the small tributary streams in the area, and the deep and shallow aquifers of the San Luis Valley. Engineering studies have shown that the groundwater aquifers of the valley are replenished by the Rio Grande and those small tributary streams. Ultimately, it’s all fed by high mountain snowpack; it’s a natural recharge system. The SLVID needs that snowpack to recharge the system so that groundwater can then be pumped for agricultural crops. The SLVID’s service area is located in the middle of the closed basin area of the San Luis Valley, where the groundwater management districts first began to develop. The SLVID is totally encompassed by Subdistrict No. 1. The economy here in the San Luis Valley is largely dependent on agriculture.

When severe drought hit in the Rio Grande basin in 2002, groundwater pumping throughout the valley drained a large number of the shallow aquifers in the San Luis Valley. As early as 2006, the area farmers in Subdistrict No. 1, being the conservationists that they are, took it upon themselves to start looking closely at the local groundwater data compiled by a local engineering service. Discussions began about forming a groundwater management district shortly thereafter. The focus of the groundwater management district would be to reduce groundwater consumption within its boundaries. In 2011, Subdistrict No. 1 was formed under the management of the RGWCD. The farmers of this subdistrict, which included the farmers under our service area, decided it was time to take control and try to balance water supply with demand.

Because the SLVID is in Subdistrict No. 1, a lot of cropping types within our service area were changed from what was historically grown to a crop type that maximizes the available groundwater supply. Crops that required heavy irrigation water use have been cut back. The farmers have tried to use their irrigation for more valuable crops. The RGWCD and the board of managers of the groundwater management districts continue to offset well depletions to the Rio Grande and to sustain and recharge their groundwater aquifers.

Agricultural conservation techniques for both soil and irrigation water use within our service area over the last 10 years have been remarkable. Farmers have always been conservationists, but with the organization of the groundwater management district came a big move to sustain the whole agricultural economy here. People in the San Luis Valley saw what was going on in the other river basins of Colorado, where the Colorado state engineer began curtailing wells and firmly enforcing groundwater rules. The SLVID’s farmers saw early on what was coming down the road and began trying diligently to control their water usage without state involvement.

Irrigation Leader: Have you already hit the point at which the aquifers have begun to recover?

Robert Phillips: Subdistrict No. 1, in which the SLVID resides, began officially operating in 2011, and the unconfined aquifer underneath the service area of the subdistrict began to recover immediately. The recovery continued for the next 5 years. Since that time, the subdistrict has struggled to maintain its target recovery rate. Engineering analysis of the groundwater aquifers in the San Luis Valley suggests that this has been caused by recent lower-than-average stream flows in the Rio Grande its tributaries, which replenish those aquifers. Since 2012, farmers within our service area have reduced their irrigated acreage and groundwater usage by making use of short-term fallow programs offered by Subdistrict No. 1 and the federal Conservation Reserve Enhancement Program, which fallows agricultural lands and water usage for 15 years. Engineering studies have shown that the rise in aquifer levels within Subdistrict No. 1 are totally dependent on the amount of recharge to the system from snowpack received in the high mountain ranges adjacent to it. As the drought continues, it becomes tougher and tougher for the farmers to keep the recovery of the aquifers on schedule. The Colorado state engineer has told Subdistrict No. 1 that the state is going to hold it to its deadline of 20 years from the time of inception to recover the unconfined aquifer to the level it chose for itself in its current plan of water management.

Robert Phillips: There is not too much urbanization in the San Luis Valley itself. However, the urban areas on the Front Range are interested in reaching into the San Luis Valley for municipal water supplies. There is an organization called Renewable Water Resources that is based in the northeastern part of the San Luis Valley that supports the idea of exporting 22,000 acre-feet of groundwater per year to the Front Range communities. That organization is offering a lot of money to landowners in the northern part of the valley to purchase their water rights. The local farmers and ranchers in that area are struggling right now to manage their crop water use operations while also trying to manage the valley aquifers. When people begin telling them that they’ll pay a lot of money to buy their water rights to pump water out of the valley, it is a puzzling proposition. How can this organization find enough groundwater to pump to Front Range communities when there isn’t enough there for everyone here to farm with?

The general public in the San Luis Valley is strongly against the idea of transferring any water to the Front Range. The RGWCD and the agricultural community are doing everything they can to oppose it. Unfortunately, it is legal for Renewable Water Resources to look into the possibility. Like I said earlier, the ground and surface water here in the San Luis Valley form one big system that works together. If you alter one part of the system, it will affect the others. This water system not only benefits farming, it has a lot of conservation, recreation, wildlife, and environmental benefits as well.

Irrigation Leader: Tell us about the expected conditions for your district and the Rio Grande in 2021.

Robert Phillips: It’s a little too early in the year to predict. SLVID personnel watch the Natural Resources Conservation Service’s monthly Rio Grande forecasted flows at Del Norte report throughout the spring to plan for the summer season. Unfortunately, based on current snowpack levels at the head of the Rio Grande, the February 1, 2021, Rio Grande at Del Norte forecasted that flow for April through September 2021 is about 78 percent of average. It’s not looking great, but it’s a little too soon to tell. We still have our heaviest snow months of the year, February and March, coming up, so we’re hoping for the best.

Robert Phillips is the superintendent of the San Luis Valley Irrigation District. He can be contacted at robert@slvid.org or (719) 754‑2254. 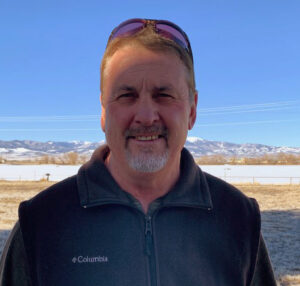