The Quincy–Columbia Basin Irrigation District (QCBID) is one of the three irrigation districts operating the Columbia Basin Project (CBP), which brings water resources to the Columbia basin. It serves about 250,000 acres, which grow over 45 crops. In this interview, QCBID Manager Roger Sonnichsen tells Irrigation Leader about QCBID’s current top issues and how it is continuing its essential services during the COVID‑19 pandemic.

Roger Sonnichsen: I grew up in Okanogan County on a small cattle ranch. My dad irrigated about 70 acres of alfalfa with a silage corn rotation. Growing up on the ranch, I first began my irrigation experience helping dad change handline sprinklers along with my brother, Wayne, at an early age. During my high school years, I worked for the neighbors, moving handline sprinklers morning and evening during the summer between haying jobs. Following graduation from Liberty Bell High School, I attended Washington State University (WSU) and received a bachelor of science in agricultural engineering. My focus during college was irrigation. My first engineering job was with Sunnyside Valley Irrigation District as a summer intern. I continued at WSU to obtain a master’s degree with a focus on water conservation. My master’s coursework led me to accepting a 2‑year job with the Washington Department of Ecology’s water resources program, working in the referendum 38 grants program and providing funding to irrigation districts to help them develop water conservation planning and funding projects. With constraints at Ecology and looking for a change of view, I accepted employment with Boyle Engineering, a consulting firm in Colorado with a focus on water planning and modeling. Following 4 years of work in Colorado, my wife and I decided to return to be closer to family in the Northwest. This move was made possible by an opportunity at the Ephrata field office of the Bureau of Reclamation on the CBP. I enjoyed my work at Reclamation in irrigation operations, which also came to involve water planning and modeling in the Yakima basin and on the CBP. I always enjoyed working with irrigation districts while at Reclamation, so when an assistant manager position opened at QCBID, I applied. I had worked at Reclamation for 12 years. QCBID Manager Darvin Fales elected to give me a chance, for which I am grateful. Darvin was a great mentor, and it was my pleasure to work under him for 12 years. When he took a position at Columbia Basin Hydropower, I threw my name in the hat to succeed him, and I am humbled that the QCBID directors appointed me as manager in fall 2019.

Roger Sonnichsen: QCBID is located in Grant County in central Washington State, in the rain shadow of the North Cascade Mountains, where the average annual precipitation is 7.5 inches per year. The district was formed in 1939 by the landowners as one of the three irrigation districts that contracted with Reclamation to build the CBP. Our two sister districts are the East and South Columbia Basin Irrigation Districts. QCBID is governed by seven elected directors.

The more than 3,000 landowners who make up QCBID irrigate over 250,000 acres, on which they grow a large variety of crops—over 45 in total. The top crops are alfalfa and hay, apples and other fruit, corn, potatoes, dry beans, wheat, grapes, and various seed crops.

After its initial development under prior contracts with Reclamation, QCBID signed its most current repayment contract with Reclamation in 1969. This contract defines the CBP reserved works that are jointly funded by the three irrigation districts and the transferred works that QCBID is solely responsible for repaying, operating, and maintaining. QCBID’s transferred works consist of the 86‑mile-long West Canal, designed with an initial capacity of 5,100 cubic feet per second, and the main, 6‑mile-long Royal Branch Canal. The West Canal and the Royal Branch Canal serve a network of laterals, totaling 900 miles in length, which make deliveries through over 3,000 measuring devices. About half the district lands are higher in elevation than the West Canal, so we have nine large pumping plants that lift water between 90 and 250 feet. These nine plants have 58 pumps and motors as well as the associated transmission facilities and transformers used to supply the 45,000 horsepower of electricity they need to run. Additionally, the district is responsible for thousands of miles of open and buried drains; 70 small relift pumps; and the associated shops, offices, and housing at the six watermaster headquarters.

Irrigation Leader: How different is being manager from being the top engineer of the district?

Roger Sonnichsen: It’s like the difference between a base coach and team manager. As base coach, you are focused on signaling one player around the bases, while as the manager you are focused on the current situation, but also thinking about what has already occurred, what may happen next in the current game, and even what may happen in upcoming games.

As assistant manager, I was focused on the current situation of the canals and facilities, working with my portion of the team to keep systems running as smoothly as possible to make deliveries and pump water. As manager, I coordinate with district directors to gather necessary resources and then coordinate with the whole district team to develop a cohesive unit to accomplish the directors’ goals. The overall goal of the directors is to deliver water efficiently and economically.

Irrigation Leader: What are the top issues facing the district today?

Roger Sonnichsen: Our oldest facilities were constructed 70 years ago, so maintaining our aging infrastructure is a key priority. Deteriorating concrete and aging pumping plant infrastructure continue to be top issues. Additionally, the capacity of the West Canal at its choke point in Ephrata continues to be an item of focus.

Irrigation Leader: What sorts of infrastructure projects are you carrying out to meet those goals?

Roger Sonnichsen: For the past 15 years, we have made it a primary focus to line and pipe a few laterals across each watermaster section every year. The district is divided into six watermaster sections. We have been successful in obtaining matching grants from Ecology, grants from Reclamation’s WaterSMART program, and incentive monies from the Bonneville Power Administration for the water and energy conservation realized by these projects. At this point, we have lined and piped approximately 80 miles of laterals and estimate an annual savings of 32,100 acre-feet of water.

Annually, we focus on routine maintenance repairs of a few pumps and motors from the pumping plants. We have also made major upgrades to large transformers and pumping plant controls.

The capacity of the West Canal has resulted in districtwide water rationing during peak crop growth stages. We have performed evaluations with HDR Engineering of how best to solve the West Canal capacity issue. The various options included widening the canal, adding additional freeboard, or constructing a reservoir, but the best option appears to be installing a pumping plant at the Frenchman Hills wasteway. This idea was originally proposed by Reclamation in the early planning of the project and was called the Homestead Pumping Plant. Water draining from the irrigated lands to the north passes in front of the Frenchman Hills wasteway outlet; during peak deliveries, this water could be pumped into the West Canal to serve lands on the Royal Slope, thus relieving the need to deliver through the choke point of the West Canal in Ephrata. We have evaluated the possibility of Homestead being a combination power generation and pump plant, but this needs to be further investigated.

Irrigation Leader: How have your operations been affected by the COVID‑19 pandemic?

Roger Sonnichsen: The biggest change has been social distancing. Right off the bat, we implemented protocols to allow for people to socially distance and to keep as many folks separated from each other as we could. The primary focus is to keep isolated and follow the 6‑foot distance rule. In the field, only one person is allowed in a vehicle at a time, and if that’s not possible, then people sharing a vehicle have to wear masks. Upper-management folks have been repositioned from our main office to our field offices so that we can maintain social distance. That way, if there’s an issue with the virus in a particular office, it doesn’t affect everybody at the same time. Our other main focus is to make sure to isolate anyone who has been sick or who has been in close contact with someone who is sick so we can avoid spreading the virus throughout the district. That has been effective. Now that the vaccine is available, we’re actively working on getting vaccinated.

Irrigation Leader: Your experiences include working for the state government, for Reclamation, and as a consultant for water resources planning. What strengths have you drawn from that breadth of experience?

Roger Sonnichsen: I think it has been a cumulative building process. Each of my prior experiences has helped me understand the different areas that collectively make up the system of irrigated agriculture in the United States and particularly in Washington State. My initial work with Ecology helped me understand Ecology’s role with regard to water rights and its focus on the beneficial use of water, in particular for irrigation, which is important to my foundation of knowledge. Consulting work gave me a good understanding of how to apply my technical skills. My time in Colorado, which has a much more limited water supply, helped me to see how to think about and make use of a valuable resource. Certainly, working at Reclamation helped me build the skill set needed to understand the CBP, Reclamation’s role in it, and how it facilitates working with the irrigation districts.

Irrigation Leader: What is your message to your state legislature and to your congressional delegation?

Roger Sonnichsen: I think everyone understands the importance of feeding our nation and the security of our food supply. Ultimately, QCBID is a group of landowners who collaborate to make it possible to operate and maintain an irrigation project here in central Washington State, creating a vibrant economy, so we can continue to produce food and to provide food security to the people of Washington State, the nation, and the world. Many of our landowners’ products are exported out of the port of Seattle to Asian markets.

Water and energy conservation funding sources, such as WaterSMART, have provided tremendous benefit, allowing the district to extend its critical system improvement work by 40 percent each year. The conserved water and energy are freed up for other purposes at a significant savings compared to new facilities. Continuing to fund these types of projects, from which everyone gains, is encouraged.

Irrigation Leader: What is your vision for the future of QCBID?

Roger Sonnichsen: The district has great employees, from ditch riders to managers, who are accomplished and skilled. Many have been with the district for their entire career. As our workforce evolves, my focus is to know each employee and to understand their needs, then to work toward fulfilling these needs. My vision is to focus on cultivating great employees, because they are what makes us successful at improving and repairing our aging infrastructure and allowing us to deliver water reliably.

Also, I continue to work with the directors on water delivery modernization. To be successful in our mission statement of delivering water efficiently and economically, we will need to continue to automate aspects of water delivery. We have taken small steps through the installation of automated lateral turnouts, which we continue to evaluate.

Roger Sonnichsen is the manager of the Quincy–Columbia Basin Irrigation District. He can be contacted at rsonnichsen@qcbid.org or
(509) 787‑3591. 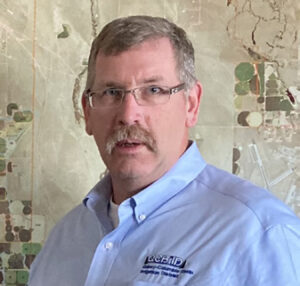