"The technical level we have reached is formidable. The automated management of water resources is no longer optional—it is required—and thanks to our partnership with Rubicon Water, we are at the forefront of progress in this area.” These are the words of Fernando Rueda, the president of the Ñuble River Joint Board of Control, a water users’ organization located in the south-central area of Chile that began to implement Rubicon technology in 2017 and continues to add water solutions developed by the business today.

Rubicon specializes in the creation of technology to improve the management of water in open-canal irrigation networks. The company’s solutions consist of automated control gates with components that include integrated flow meters, operating software, and photovoltaic energy, all of which interact with advanced remote control engineering.

The company, originally from Australia, is active in a variety of countries, including Australia, Chile, China, India, Italy, Kazakhstan, New Zealand, Spain, and the United States. Its main clients are large irrigation districts and water management organizations. Its entry into Latin America began a decade ago, and its main office is located in Santiago, Chile. From there, it has started to expand throughout Latin America, and today, it also has offices in Costa Rica and Argentina.

Rubicon Latin America has 40 staff members, including engineers; specialists in electronics, telecommunications, and control systems; and field technicians who continually advise its clients.

Álvaro Luna Maureira, the general manager of Rubicon Water Latin America, says that “the modernization of irrigation canals using Rubicon technology improves the efficiency of the management of water resources, increasing productivity in a sustainable manner. Our company designs, manufactures, and installs solutions that accord with the needs of each client, using components and technology created especially for their goals and tested in a large number of countries. In Chile, the main water users’ organizations have put their trust in us, and clients in other Latin American countries are starting to do so as well.”

The development and implementation of Rubicon technology is taking place in the context of a severe drought across Chile, which is affecting agriculture and food production. According to numerous studies, 76 percent of the country’s area is affected by the drought, and more than 100 aquifers are suffering from low recharge levels compared to demand. By 2025, Chile is predicted to be among the 30 countries in the world with the highest water-related risks.

Thus, it is necessary to pay extremely close attention to water resource management. Rodrigo Romero Jara, the manager of the North Biobío Canal Association, adds that “Rubicon allows for the operation of canals, whether by flow or by volume, letting us open and close different delivery structures using a computer or phone, and allows us to manage our water and adapt ourselves to these times. That is the trend in management, particularly in these times of water shortage, when water needs to be used in the best way possible.”

Anticipating these problems and with the aim of increasing the productivity of agriculture on a global scale, Rubicon developed a unique technology for the automation of gravity irrigation systems during the 1990s in Australia as part of a public-academic-private partnership. The company’s water management solutions are developed using cutting-edge technologies that are designed in conjunction with the University of Melbourne. Its products are rigorously tested in Rubicon’s dedicated hydraulics flow laboratory, one of the largest in the Southern Hemisphere.

Over the last few months, Rubicon has entered the Latin American market with greater force. In July 2021, it installed 18 automated gates commissioned by the sugar business Ledesma, a leader in its field in the Argentine market. Ledesma developed a 5‑year plan to increase its productivity and competitiveness and realized the fundamental importance of being more efficient in the use of water in its 40,000 hectares (98,842 acres) of sugarcane fields and 700 kilometers (435 miles) of canals. In response, the company launched its project with Rubicon, starting with a first stage at its largest property.

At the same time, Rubicon designed its first installations in Costa Rica as part of a pilot project for the country’s National Service for Groundwater, Irrigation, and Drainage. The solution helps manage a diversion canal in the Río Cañas area.

Rubicon’s first projects in Latin America were carried out in Chile more than a decade ago, and since then, the company has undergone a remarkable expansion that has led the main water users’ organizations in the country to put their trust in the company’s solutions. A number of Chile’s joint boards of control and canal associations, including those of Huasco, Elqui, Bellavista, Aconcagua, Rinconada, Choapa, Melozal, Ñuble, and North Biobío, already use automated gates for the measurement, remote control, and delivery of water to irrigators.

The president of the Ñuble River Joint Board of Control adds that “thanks to the automatic gates, the efficiency of water distribution is optimal and real-time, in addition to which we have been able to minimize our reaction time after unexpected events.”

During the 1990s, the Australian government used Rubicon’s autonomous canal control technology to deal with the country’s water crisis. One of the best-known cases was that of the Murray- Darling basin, where authorities decided that irrigation modernization was needed and achieved unprecedented levels of efficiency and productivity. Including its projects in Chile and across the region, the Latin American branch of Rubicon installs more than 250 gates a year and has more than 35 clients across Latin America.

Jorge Ramírez Contreras is Rubicon’s marketing coordinator for Latin America. He can be reached at jorge.ramirez@rubiconwater.com. 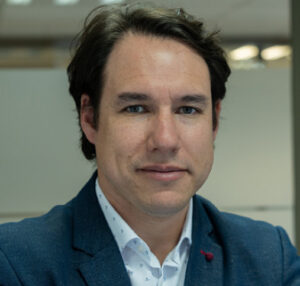