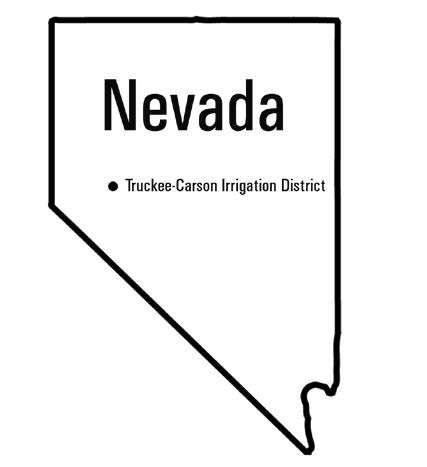 Amount of water diverted for irrigation per year in acre-feet: 300,000 Rusty Jardine: The Truckee-Carson Irrigation District operates and maintains the Newlands Federal Reclamation Project, one of the oldest in the nation. Most every facility in our project, including Lahontan and Derby Dams, is over 100 years old. We have some big maintenance challenges looming before us! Years ago, almost 600 homes were flooded as a result of a catastrophic breach of the embankment of the Truckee Canal in Fernley, Nevada. The canal remains an invaluable feature of the project, and we must ensure that it is operated safely and efficiently. We are planning to line the canal with concrete, which will cost tens of millions of dollars. The financial challenges associated with that are daunting. We raise money by assessing our approximately 2,500 water users by acre. Our annual budget hovers a little under $7 million annually.

Rusty Jardine: We have entered contract negotiations with the United States for a new contract. Among other concerns, we are being pressed to measure 100 percent of the water that is delivered in an open channel system. Paying for the necessary measurement devices is a challenge. Do we pass on the cost of the device and site work—up to $30,000 each—to our water users? With over 1,600 takeouts in the project, the cost of such a measurement program would near $50 million—seven times our annual budget! Since 1999, we have installed 141 measurement devices, many of which are equipped with satellite telemetry, but we are being asked to do much more in the next contract.

Rusty Jardine: The district is blessed with many people who have served us long and well. They are good, dedicated, and hardworking, but just like our infrastructure, they are aging. Many will soon retire—the silver tsunami! The challenge is to bring on new people and get them properly trained in order to sustain the mission of the district.

Irrigation Leader: What training do you currently provide to your employees?

Rusty Jardine: We regularly have outside entities, including the Bureau of Reclamation and other contractors, provide us with training, often without expense to the district. For example, NV Energy, the primary electrical services provider in our state, provided safety training to our staff. We rely upon the staff of the Irrigation Training and Research Center at California Polytechnic State University, which specializes in irrigation practices, to provide us with water measurement training. We provide in-house training as well.

Irrigation Leader: How much do you spend on training for your employees each year?

Rusty Jardine: We expend approximately $25,000 annually for training provided through outside sources.

Irrigation Leader: What is the most important thing you have learned as manager?

Rusty Jardine: The most important thing is to protect water rights and provide policies for water usage.

Rusty Jardine: You need to have some understanding of many different disciplines and topic areas, including applicable regulations and decrees; engineering; hydrology; law; construction; human resources; public finance; and, of course, customer service!

Stephen Bell of Trojan Technologies: The Advantages of UV Treatment