Russell “Rusty” Bowers has been the speaker of the Arizona House of Representatives since 2017. He also previously served in the Arizona Senate from 1997 to 2001 and in the Arizona House of Representatives from 1993 to 1997. In this interview with Irrigation Leader, Speaker Bowers tell us about water management in Arizona, the importance of finding new supplies for the growing Southwest, and the legislation he hopes moves forward this year.

Irrigation Leader: Please tell us about your background and what prompted you to run for office.

Rusty Bowers: I am a fourth-generation Arizonan. One half of my family began settling up in the White Mountains in St. John’s and went over to Alpine in 1875. After they lost some kids in a really bad winter, my great-grandmother said they needed to move somewhere lower, so they came down

to a little colony called Lehi, which was on the north side of Mesa and now has been sucked into Mesa. My great-grandfather had a quarter- or half-section of land, and he farmed and developed. He was on the water board, among other things. My grandmother married Marcellus Crandall, a farmer in the southern Mesa area who was on the Salt River Project (SRP) water board. A Bowers was the first territorial patent holder in Arizona; his land was up in Del Rio Springs, in the Chino Valley, north of Prescott. I don’t know if he was a direct relative, but I like his name. Ha! We lived there until I was about 6 years old and then moved down to the valley. My dad was in education; he was a coach in the Scottsdale schools. He ran racehorses and worked. During the school vacations in the summer, he ran a sand business. We would shovel sand off the canal banks into a dump truck and bring it to Marvel Masonry at Indian School and 35th Street. I learned how to use a shovel, like all my brothers.

Why did I run for office? I was dared. I’d been offered a job at an out-of-state university, but they wanted me to get a master’s degree, and I had five kids by then. Arizona State University didn’t want me; it turned down my portfolios in sculpture and in painting. At the same time, a lady was trying to get somebody to represent my district in the legislature. She said, “Why don’t you do it?” I blew off the suggestion, but she said, “I dare you to.” I had 2 weeks to get all the required signatures. I ran, and unfortunately I won.

Irrigation Leader: What are your thoughts on the importance of irrigation, water supply, and energy production in Arizona?

Rusty Bowers: Well, I lived in the irrigation ditch outside our house in Scottsdale, especially in the summer. That was the coolest area around. That area was supplied by the SRP, so we had flood irrigation as well as a little orchard and horses. I always knew how important water was in Arizona, and I was aware of the SRP’s dams along the river and the conservation efforts.

Growth in this area has long been explosive, and it is only getting more so. It’s going to take real preparation to maintain adequate water supplies and to clean and reuse wastewater. I know that the law regarding wastewater is currently not as robust as the law regarding groundwater and surface water, but it will be increasingly important to reuse water, something for which I have been calling for years. I and others here have gotten rid of our grass and started xeriscaping. We use gray water for trees, golf courses, and agriculture. Everybody is getting much better at its use.

However, the population keeps growing. Right now, to find water, we need to go either south or east; looking west will not be possible for environmental reasons. I don’t see us building a desalination plant in California. The Colorado River is overappropriated, and if we get another bad water year, it’s going to be a hard run. I have initiated discussions with Jorge Mendoza Yescas, the consul general of Mexico in Phoenix, and with Governor Ducey on his ties east. We need to look at pulling floodwater off the Mississippi, Missouri, Platte, and Red Rivers. We should try to secure and move some of that floodwater, which does so much damage, and pump it into reservoirs that can feed New Mexico and Arizona.

Irrigation Leader: Do you have any other thoughts regarding the Colorado River and about working with the other basin states and the Bureau of Reclamation?

Rusty Bowers: Well, someone has yet to volunteer to take less. All seven states on the Colorado want water, and they all want more of it. I think we have only 65 percent of the average snowpack that feeds the river in Colorado and Utah so far this year. We’ve put through the Drought Contingency Plans for Lake Mead and the Colorado River, which will be put to the test. Tribes like the Colorado River Indian Community also want to make the best use of their water and don’t want to lose it. They’d like to use it for a period of time, improve their economic situation, and put it back to personal use later. In the meantime, we need to find water. There’s bridge water in the Harquahala, Butler, and McMillan Valleys going west. I know there are some who want to use other basins’ water in Arizona, and I’m not in favor of it. Rural Arizona needs to grow. I don’t want to turn the rest of Arizona into California’s Owens Valley, which has been dried out sending all its water to Los Angeles. Nor do I want the Colorado to be a dry streambed like the Salt River below Granite Reef Dam.

If we are going to continue to grow, it becomes more critical every day to act. We put $5 million in our budget to find, localize, and consolidate the studies that have been done and to talk to other states about the kinds of agreements we need to have with them. Now, we’re going to be faced with a U.S. Department of the Interior hostile to moving water. Sadly, I think the new secretary will not be particularly understanding of our plight.

Irrigation Leader: What water-related policies do you hope the legislature addresses this session?

Rusty Bowers: Most of them have to do with consolidating water rights and helping people who are in the adjudication process to file their paperwork properly and get a fair shake. We have a lot of exempt wells. Some people want to meter all the wells in Arizona. I see only one end goal for that, which is figuring out how Maricopa and Pima Counties can get their hands on everybody else’s water. I’m not too hot on that, and I live in Maricopa County. We need to do better and be more thoughtful with what we have.

Irrigation Leader: What is your message to Congress? What should it know about your state?

Rusty Bowers: If the members of Congress looked at the money they spend every year fixing the coasts and the south-central region of the United States after hurricanes and flooding, they might think, “Maybe we could do better with the population in more stable areas.” The basin of New Mexico and Arizona is a stable area, it just lacks water. If you brought water from the flood zones to the Front Range and were able to put it in the rivers there, it would save money in the long run by reducing expenditures on fixing levees and rebuilding cities that have been affected by floods and hurricanes. As people move away from snow, cold, and tornadoes into Arizona and New Mexico, maybe Congress should consider that.

Irrigation Leader: Is there anything else you’d like to add? 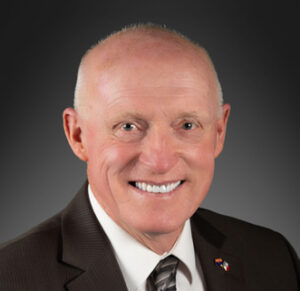 Rusty Bowers is the speaker of the Arizona House of Representatives. He can be contacted at rbowers@azleg.gov, or by phone at (602) 926‑3128.