The Hidalgo County Water Control and Improvement District #19 (HCWCID19) is a small water supplier located near the Rio Grande. In this interview, General Manager Oscar Gonzalez tells Irrigation Leader about its operations, the challenges of dealing with encroaching development, and the complications caused by the construction of the wall on the U.S.-Mexico border.

Oscar Gonzalez: After I graduated from college in 1982, I went to work for a private oil company as its agribusiness accounting manager. I worked in the corporate office for 10 years and oversaw the farm and ranch divisions, which had operations in Texas, Montana, and Wyoming. I transferred to the company’s farming operation in the Rio Grande Valley in the role of chief financial officer, a position I held from January 1993 to August 2005. I was then the general manager of Sharyland Farms, part of the same company, from 2005 to 2016. I retired from farming operations after 34 years of service, and in February 2016, I was hired by the HCWCID19, for which I already served as a director, to oversee operations as its general manager. Now, I provide agricultural water to the farm that I once managed. I’ve been involved with this farming operation for about 39 years and with the water district as a director for about 20 years.

Irrigation Leader: Please tell us about the history of the HCWCID19.

Oscar Gonzalez: John H. Shary acquired the Mission Canal Company and developed it into the United Irrigation Company, which was one of the longest-operating private irrigation companies in the Rio Grande Valley, operating from 1915 to 1952. In July 1952, HCWCID19 was established due to the sale of the United Irrigation Company’s irrigation system. We’re located in Mission, Texas, right on the banks of the Rio Grande River. The district’s boundaries encompass 6,263 acres. We have some exceptions and exclusions, so our current net acreage is 2,367. Our water rights allow us to pump straight out of the Rio Grande River and to provide water for agricultural purposes only. We place our water orders through the Texas Commission on Environmental Quality (TCEQ).

Irrigation Leader: How many customers do you have?

Oscar Gonzalez: Prior to 2018, we had one customer: the operator of the corporate farm owned by the privately held oil company. That farm grew cabbage, carrots, celery, corn, cotton, melons, onions, and winter greens. It operated as a grower-packer-shipper from 1974 to 2018. After 2018, the company restructured and sold the farm to a new owner. Now, there are three farmers who lease the land. One of the current farmers grows corn, cotton, and sugarcane; another farms corn and cotton; and the third grows strictly citrus.

Irrigation Leader: Have you been affected by droughts on the Rio Grande?

Oscar Gonzalez: There was a drought in the mid-2000s that affected our water allocations from Amistad Lake and Falcon Lake, two reservoirs on the Rio Grande. As the storage percentages in those reservoirs go down, the farmers get fewer irrigations from the district. Once the water storage percentage reaches the municipal level, all agricultural irrigation water releases stop. The storage levels are also affected by Mexico, since the treaty of 1944 covers six tributaries that release water to the Rio Grande. Mexico’s water releases play a crucial role in maintaining the storage percentages that the TCEQ uses to issue additional water allocations to our adjudication certificates.

Irrigation Leader: What water storage and distribution infrastructure does the HCWCID19 have?

Oscar Gonzalez: Our pumping facilities have three pumps. Two are 42-inch lines and one is a 24-inch line. Two of them are electric, and one is powered by natural gas. We pump water directly into two lateral earthen canals. From there, water goes through underground pipelines to the different fields for irrigation needs.

Irrigation Leader: What are some of your top issues today?

Oscar Gonzalez: We are dealing with aging infrastructure, much of which is quite a few decades old. We work on our earthen canals, concrete canals, and underground pipelines at different times of the year, when there is leaking or seepage. Temperature changes and ground movements are a common source of our problems. We’re also dealing with metering systems, or transducers, that monitor water flow.

We’re also monitoring the changes in our farming operations caused by the encroachment of urban development. That is something we’ve been dealing with since 2005. The previous owner of the land we service had a development company that had a master plan and brought in residential and retail development and a business park. A good portion of the farm was developed through that plan. Now, that urban development is affecting farming practices, including what crops are grown. For example, when sugarcane is harvested, the mill will burn the cane stock, and now it has to worry about the smoke and ash being carried toward the residential developments that are getting closer and closer to the farming operation. There are also some restrictions on using planes for boll weevil control. An international bridge and a highway have been built through the middle of the farming operation, and a new loop toll road has been proposed for the southern part of the farm.

Irrigation Leader: How do your operations and your situation differ from those of larger districts?

Oscar Gonzalez: We just deal with delivering irrigation water for agricultural use only. Our clients are all farmers, so we don’t deliver water for municipal needs. That has pros and cons. Water demands are based strictly on agricultural use, crop rotation, and crop selection, so if a farmer misses the planting date of a crop, like they did this past fall, we lose some water revenue for that crop year.

Because the HCWCID19 is a water control and improvement district, we have a little more leeway in certain areas than a traditional irrigation district. Our district has more flexibility with dealing with financing, roads, trespassing and illegal dumping on our property, drainage needs, and the maintenance of infrastructure for water distribution in our area.

Our current farmers use poly pipe, which is a blue collapsible pipe. That has improved water distribution, conserved water, and limited labor costs on the farmer side. Our farmers also try to implement minimum tillage to try to conserve moisture in the field. Water conservation is a key part of our operations.

Irrigation Leader: Is there anything else you wanted to discuss that we haven’t touched on yet?

The construction has affected us because the builders have taken down the levee system in front of our pumping plant, which is used for flood control and also provided a means to access our pumping plant. We must use a temporary secondary road to enter our pumping facilities, which causes many challenges. Some of our canals have been temporarily filled in for the wall construction. Since the construction stopped, they were supposed to excavate the canal and backfill the dirt behind the levee wall. The current design is a levee wall within the levee system with an 18‑foot bollard wall on top.

There are rumors that the administration is going to fill the gaps in the border wall, which I hope will address the levee wall, because flooding is a big concern. Hurricane season begins in June. If those levees are not reinforced and a hurricane hits Monterey, as occurred in 2010 when the river crested over and they had to open the floodway, our community, farmers, and infrastructure could be greatly affected. 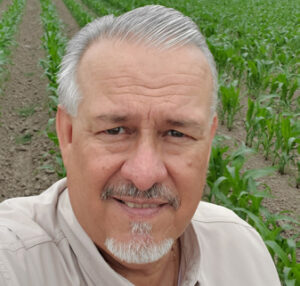 Oscar Gonzalez is the general manager of the Hidalgo County Water Control and Improvement District #19. He can be contacted at hcwcid19@outlook.com or (956) 266‑6370.