Moleaer has created a novel aeration system that injects water with miniscule bubbles thousands of times smaller than a grain of salt, allowing the water to provide higher levels of oxygen to plants’ roots, to better penetrate soil, and to break apart biofilms and algae within irrigation systems. To see how Moleaer’s solution fits into the irrigation industry, we interview Joe Coelho, the agronomy manager of Maricopa Orchards in Fresno, California, who is testing a Moleaer system.

Joe Coelho: I’m the agronomy manager for Maricopa Orchards. I have been farming since I was 8 years old. I studied crop science at went to the California Polytechnic State University, San Luis Obispo. I come from a big farming family and am involved in the production of its permanent tree crops. My brothers and I own and manage our own farms and ranches through another business. I have a pest control advisor license, a certified crop advisor license, and a qualified applicator license. My day-to-day work at Maricopa Orchards involves controlling agronomic inputs with our internal and external farm teams. I have a team of in-house advisors that manages some of the portfolio and some external advisors. I run a research and development group that tackles status-quo special problems and collaborates with universities, extensions, government entities, and private individuals on various research topics.

Joe Coelho: Maricopa Orchards is a farming operation that is most heavily involved in nut crops. Pistachios are the number 1 crop, and almonds are number 2. We also grow blueberries, cherries, citrus fruit, and walnuts. We own a couple of dairies, which we lease.

The orchards cover many acres. Three-quarters of that area is managed in house; the last quarter is managed by custom farmers. The owners of Maricopa also own Touchstone Pistachio, which is a processing and sales company.

Maricopa Orchards is a family-owned business. It is owned by the Assemi family, which is well known in the Central Valley for its home-building company, Granville Homes. In addition to being real estate developers, the family owns a medical school and pharmacy school in Fresno and a hospital in Afghanistan and have a philanthropy business and a home-goods distribution company. It’s a diversified family business; farming is just one part of it.

Irrigation Leader: What sort of irrigation systems do the orchards use?

Joe Coelho: We mostly use dual-line drip irrigation with pressurized PVC systems and filter stations, which serve anywhere from 160 to 960 acres each. We have some acquisitions that have come to us with fan jets, which are heavily used in citrus. While we mostly use dual-line drip, we start some younger plantings with single-line drip to save water and add the second line later. We have some trellised irrigation for organic almonds so that we can flame and burn weeds below. There’s not much flood irrigation—there may be a few ranches that have it. Flood irrigation is only feasible in California where water is very plentiful—for example, near a river that has water allocation all the time or shallow groundwater that you are not restricted from pumping.

Irrigation Leader: What issue are you trying to solve with your Moleaer system?

Joe Coelho: All the water bodies coming off the Sierra Nevada funnel into the Sacramento delta, which runs underneath the Golden Gate Bridge into the ocean. There are pumping facilities in the delta that pump water into the California Aqueduct, which brings it directly south. The aqueduct’s purpose was to deliver water to the Westlands Water District, the largest irrigation district in the country, and then send it over the hill to Los Angeles. A lot of our plantings fall within the Westlands Water District. When the Endangered Species Act (ESA) was introduced, the Bureau of Reclamation began to cut water allocation to protect Chinook salmon and delta smelt, both considered endangered. Up until that point, we normally received nearly 100 percent of our allocation, which equated to 2½ acre-feet per acre, but with the advent of the ESA, the allocation numbers were routinely cut to less than 100 percent. There were several severely reduced allocation numbers in the late 2000s, and as we began to experience drought, the numbers dropped even further. The allocations during the 4 years from 2013 to 2016 were 20, 0, 0, and 5 percent. When no surface water is being delivered to you, you must get your water from the ground, and there are many places in the state of California that are completely reliant on well water.

The heavier use of well water generally diminished soil quality with regard to salinity constituents, particularly sodium, boron, chloride, and bicarbonate. Boron is a difficult thing to leach and push outside a root zone so that a tree won’t pull it up. Sodium is easier to move. Sodium causes a lot of changes in soil texture and structure because of clay dispersion. Once all the negatively charged exchange particles in the soil are saturated with 15 percent sodium or more, the soil tightens up, compacts, and cracks. Your water channels and irrigation efficiency become impaired by infiltration reduction, additional cracking, waterfalls, and channels, which the water fills, moving back up to the surface and undergoing evaporative loss. In addition, trees don’t like sodium, though pistachios can tolerate it a great deal more than almonds can.

When you can’t push the water down deep enough, you get a concentrated head of salt right in the middle of the roots. A band-aid solution to the age-old problem of decreased soil infiltration is gypsum, which flocculates the soils and allows you, using the same amount of water or slightly more, to push that concentrated salt head past the root zone. As things dry, the salt will rise back up toward the root zone. There are other solutions that you might be able to make use of, depending on the lime characteristics, such as reacting that lime to make gypsum and improve infiltration. A grower may also use what is called a leaching fraction, which refers to additional irrigation water applied during a routine irrigation. The amount of water needed for a leaching fraction comes from a calculation based on the electric conductivity, the characteristics of the water, and a few other things. In theory, a leaching fraction of additional water at every irrigation can push water, the head of which is concentrated with salt, to a desired depth and reduce the effects of salt in the tissue of a tree.

Irrigation Leader: Why did you decide to investigate the Moleaer system?

Joe Coelho: I’ve been looking at ways to improve soil filtration for a long time, and I’m looking at Moleaer for a few different reasons. One of the objectives of my research and development department is to try to find agronomic solutions that can solve multiple problems rather than a bunch of one-trick ponies that cost a bunch of money. So while the focus of my preliminary work is to determine soil water infiltration, I also investigate other potential benefits.

The bubbles created by Moleaer’s technology improve infiltration but have several other effects at the same time. For example, they deliver oxygen to the root zone. Moleaer uses atmospheric levels or 100 percent O2 cylinders through its manifold and is able to increase the oxygen saturation of the water. All this additional oxygen is delivered to the roots. If you have a root zone with poor infiltration, and roots are sitting in water, they can get anaerobic disease. One of the first things that the technology showed was a reduction of anaerobic diseases, particularly in hydroponic and aquaponic situations. It can eliminate one of the disease problems we get, which could potentially save me $60 an acre worth of fungicide or more.

Adding extra oxygen should also help proliferate beneficial microbial communities, such as fungus or beneficial bacteria you may have added to the soil. A growth in those populations should lead to additional soil respiration, which can be measured using a gas chromatograph. Soil microbes are said to improve fertilizer use efficiency, particularly of nitrogen. Using Moleaer nanobubbles to improve the population and health of the microbial communities could save me $20 an acre or more on fertilizer efficiency products alone.

Another potential benefit is line cleaning. Drip lines are affected by the buildup of scale and biological film. The bursting of the bubbles created by Moleaer’s device can serve the same function as chlorine gas line cleaning. I can save another $45 an acre if I can get rid of that chlorine in the water, which is another thing I have to leach. Moleaer can be used to provide reservoir treatment as well. Putting the bubbles into a reservoir with a carbon-type product would clean up algae easily. That could represent another $60 of savings. Suddenly, we’re looking at $185 or so an acre of savings, not including the infiltration benefits.

Irrigation Leader: How have you been testing the Moleaer system, and what results have you seen?

Joe Coelho: I have the Moleaer device directly installed on a lateral irrigation line on a ranch here with an O2 tank connected in the field. I’m not getting university funding, so this is not a $100,000 study. I just have a single irrigation monitoring probe installed within the treated and untreated blocks. We’re treating a small area in a single direction— approximately 10 rows with 40 trees per row. The field we’re testing in is nothing short of a salt marsh—it’s one of the saltiest ranches I’ve ever farmed in my life. The bad salt constituents are more than double what I see in the worst soils in Westlands, and with nearly 50 percent of the soil exchange sites saturated with sodium, the infiltration is badly impaired.

My probes and computer system allow me to see moisture, infiltration, and salt levels at various depths over time. As we irrigate, I can see the water move downward. I can see that in the treated field, by September 30, after the end of the irrigation season, what is left behind is a low-salt root zone, and the water is getting down to 46 inches. When I look at the dry site, the infiltrations are reduced and it’s quite salty at the end of the event. All the water is getting trapped at about 26 inches rather than draining down to 46 inches and leaving a salt-free environment. We’re getting water here, but the soil is staying completely saturated. If you look at this salt index, you can see that it’s salty throughout the entire period. It was pleasing to see that, with Moleaer, I can take my water down to 46 inches, moving a lot of that salt deeply out of the root zone leaving it less salty.

Based on what I am studying, the potential replacement cost with the Moleaer solution should be $100–$200 an acre, a cost similar to applying gypsum at a rate of 1–2 tons per acre. The other potential savings and enhancements of the Moleaer system will be investigated over the next 2 years of collaboration.

Joe Coelho is the agronomy manager for Maricopa Orchards. He can be contacted at joseph.coelho@valleyorchardllc.com. 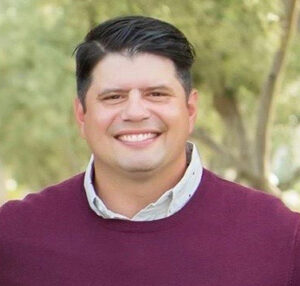