Bill Fuchs of Maximized Water Management is the inventor of the Aquatic Vegetation Rake (AVR), an excavator-mounted tool that removes waterweeds from canals without damaging their banks or requiring dewatering. By completely removing waterweeds, the AVR improves downstream water quality and reduces subsequent regrowth. In this interview, Mr. Fuchs tells us about the origins of the AVR, the results it gets, and why more and more clients are coming to see that the device really is as good as he says.

Bill Fuchs: I am a third-generation Idahoan with a bachelor of science degree from Idaho State University. I spent 22 years selling building materials while also managing the family ranch and farm. I spent 15 years as a board member and the watermaster of the Silkey Canal, a small irrigation canal in Fremont County in southeastern Idaho.

Irrigation Leader: Please tell us about your company and its history.

Bill Fuchs: In past years, the Silkey Canal hired a backhoe to remove waterweeds from the canal, and the backhoe only got a few weeds out of the canal and made a big mess in the process. I realized that there had to be a better way to remove waterweeds from the canal. I have always been a creative person and a problem solver, and I am willing to find a solution. That experience got me thinking, and I started Maximized Water Management LLC in 2010. I went on a road trip around Idaho and met with other canal managers and asked them how they were dealing with their waterweeds. I saw the rakes that they had built or bought in the past, and they told me about the limitations of their effectiveness. For the most part, these were rakes they had built in their own shops and mounted on excavators. Most of them were overbuilt. I hired engineers to analyze my ideas for the AVR and started building prototypes. That process took about 3 years, in part because we have a short growing season and I had to wait until around July to have sufficient weed growth to test the device. Since then, I have continued to improve and prove up the AVR as a product.

Irrigation Leader: Who are your clients, and where are they located geographically?

Bill Fuchs: Most of my clients are irrigation companies or districts, though they also include a county mosquito control district, a paper mill, and a mine reclamation company. While the AVR is very effective for removing aquatic vegetation, it is also useful for removing floating debris that restricts flow in waterways. I have clients in Arizona, California, Florida, Hawaii, Idaho, Montana, New Mexico, and South Carolina. Many of my clients find us by searching for YouTube videos of vegetation rakes. I have several videos that show the AVR cleaning canals.

Irrigation Leader: How did you invent the AVR, and how does it work?

Bill Fuchs: My father was a machinist and taught me the importance of using the right tool for the job. My uncle was an inventor and would build new items or improve existing models. I realized years ago the abilities of hydraulic power and what it can do to save manpower. Excavator machines are now able to do much more than dig holes. There are tools that can attach to the boom, including rock grinders, tiltrotators, and grapples. I invented a tool, the AVR, that gives excavators a way to capture waterweeds and debris while not lifting the weight of the water. It solves the problem of how to remove waterweeds from a waterway, including the roots, quickly and efficiently.

Irrigation Leader: Can the AVR fit onto any standard excavator?

Irrigation Leader: What are the advantages of the AVR over alternative methods of removing aquatic vegetation?

Bill Fuchs: There are several advantages to using the AVR. The first advantage is that nothing is poured, applied, or released into the water. It simply removes the weeds. Because the AVR lets you avoid using chemicals, I refer to it as the green solution to waterweed control. Second, the AVR removes weeds while the water is still in the canal. Every scoop with the AVR removes weeds and allows the water to flow again. The AVR has also been shown to offer longer control than alternatives—it allows customers to control their waterweeds and floating debris for years. By removing the waterweeds upstream, we reduce the nutrient loads going down the waterway. Another advantage is that the AVR removes all types of waterweeds. The basket rods in the AVR are about 1 inch apart, so not much gets away. Excavators now have precision hydraulics controlled with joysticks and other enhancements. In the past, hydraulic precision was used to salvage parts of the Titanic. Now, there are even better hydraulic controls that allow for efficient weed control.

Irrigation Leader: What kind of access does the AVR need to reach canal banks?

Bill Fuchs: Access depends on how the canal easements are maintained. Some have roads, and some don’t. The excavator will need to be able to work from one side of the canal to remove the waterweeds.

Irrigation Leader: How long does it generally take for the AVR to clear out a canal? Do you address certain problem locations, or go all the way up and down a canal?

Bill Fuchs: The length of time varies depending on the canal system. There are many variables on a canal that will slow down the cleaning process, including how many headgates, fences, bridges, buildings, and powerlines need to be worked around. The operator needs to be aware of these. Adding a tiltrotator will increase the excavator’s abilities, productivity, and flexibility by at least 30 percent.

In 2021, the Lower Yellowstone Irrigation Project (LYIP) borrowed an AVR from Billings Bench Water Association to clean over 62 miles of canals that were overtopping because of waterweed growth. The AVR immediately improved flows to farmers downstream and the LYIP soon started using it on each lateral. After using it for 1 week and seeing the results, the LYIP ordered its own AVR! The AVR improves debris removal during spring canal priming and anytime during the season when weeds or debris in front of structures are a problem. The LYIP says it is more effective and easier to use than all other methods it has tried in its 115 years of operations.

Irrigation Leader: What other results have your customers seen?

Bill Fuchs: Customers have experienced faster and longer waterweed control. My customers are satisfied with the AVR and the results it has given them. They are getting control of their waterweeds and saving money. They often recommend the AVR to others and refer them to my company. Cole Peeples, the manager of the Pondera Canal and Reservoir Company, told me, “It’s phenomenal how quickly the AVR increases the velocity of the water in the areas that have been cleaned! We are very pleased with this tool.”

Irrigation Leader: Do you rent the AVR to your customers, or do you sell it to them?

Bill Fuchs: I manufacture and sell them now. I used to clean canals here in Idaho with my excavator and AVR, but I’m getting older, and I don’t want to be the guy sitting in the excavator anymore. I’ve also realized that it’s better for a customer to have their own AVR so that there is less risk of spreading invasive weeds from one system to another. That said, I have sold them to contractors who will use them in various systems.

Irrigation Leader: Do you have any plans for expansion?

Bill Fuchs: I am getting some traction with the AVR. People are realizing that it actually works as well as I have told them. I will expand AVR production as needed, though the prices and availability of steel have been a challenge over the last couple of years. I hope we have gotten over those supply issues. I do have plans to build modified AVRs for cleaning canals with liners or concrete in the future.

Bill Fuchs is the owner of Maximized Water Management. He can be contacted at bill@maximizedwatermanagement.com. 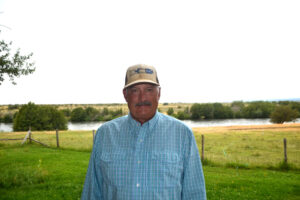