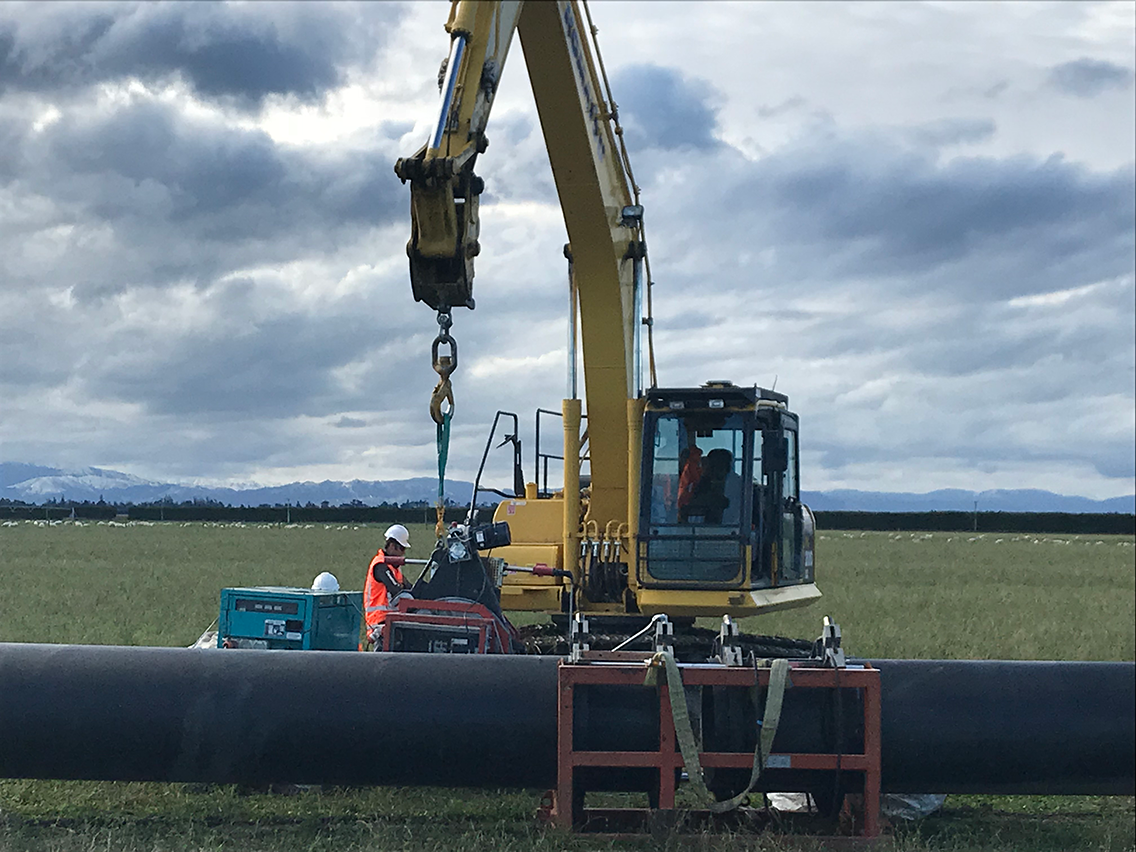 As director of the Irrigation Training and Research Center (ITRC) at California Polytechnic State University in San Luis Obispo, Dr. Stuart Styles is an expert on irrigated agriculture in the American West and on the newest irrigation techniques and technologies in the irrigation world. During trips to New Zealand in 2016 and 2018, Dr. Styles was able to visit irrigation schemes and irrigated farms on the South Island’s Canterbury Plain.

Stuart Styles: I am the director of the ITRC at Cal Poly, San Luis Obispo. I have been working in irrigation for 40 years now, and I’ve been in my current position for the last 26 years. At the center at Cal Poly, we have a professional staff of 15 full-time staff and about 30 students. I also teach three university courses during the fall quarter.

Joshua Dill: Would you give a quick overview of the ITRC?

Stuart Styles: The year 2019 marks the 30th anniversary of the ITRC. Our center performs various activities related to irrigation modernization. Our primary focus is California; about 10–15 percent of our work is in other states, and about 5 percent of our work is international. Charles Burt, chairman of the board of the ITRC, is the person who started the center, and he is still quite active. One distinctive characteristic of our center is that it supports one of the teaching programs at Cal Poly, the Bioresource and Ag Engineering Department. We have helped build that program up from 15 students graduating per year to over 45 students graduating per year.

Joshua Dill: You recently traveled to New Zealand. Would you tell us about that trip and what you were doing on it?

Stuart Styles: In 2016, I was invited to be a keynote speaker at Irrigation New Zealand’s biennial conference. I arrived a day before the conference. I gave some background information about California, but I found that it wasn’t useful to the ag folks in New Zealand. This was mostly because I didn’t have a good understanding of the challenges and issues they were facing. I had been given a little bit of information before the trip to give me a rough idea of the challenges that they were dealing with and that these were similar issues to the ones we have in California— for example, high nitrates in the irrigation water—so I presented based on the work that we’d been doing on nitrate management in California.

Joshua Dill: Where in particular did you visit?

Stuart Styles: The visit started in Christchurch. We then visited various irrigation schemes and ended up on a tour traveling down to the conference, which was held in Alexander. We mainly covered the Canterbury Plains area, where there is a lot of center-pivot irrigation. A growing number of irrigation schemes there have modernized over the last few years. I was able to visit several of them and document the issues that were common to them to help prepare for my talk.

Joshua Dill: In broad strokes, how would you describe the differences you saw between California irrigation and irrigation in New Zealand?

Stuart Styles: It was apparent that irrigation schemes in New Zealand are modernizing to a high level. They are incorporating automation, reservoirs, new gates, flow measurement, data acquisition systems, new software, and new types of flow meters, including magnetic flow meters. There is equipment developed locally by manufacturers I hadn’t actually seen before. One of the key differences between New Zealand and the United States is the onsite fabrication of 30-meter (100-foot) sections of high-pressure, high-density polyethylene (HDPE) pipe. U.S. districts will need to assess this new technology.

In a nutshell, irrigation schemes there are taking on some of the modernization activities that we have been promoting in the western United States, but they are doing it in one package, on a wholesale basis that I haven’t seen before. This approach allows irrigation schemes to establish a high level of automation and control, which really helps their growers out. That means that instead of having to negotiate individually with the power supplier, farmers are able leave rate discussions to the irrigation scheme.

The irrigation schemes are successfully selling the idea to their growers that it is important to invest in this. The modernization is being done with private investment. The growers are paying for it basically out of pocket. In the United States, by contrast, irrigation districts tend to rely on outside funding or water transfers in order to do similar modernization projects. In California and other states in the West, districts tend to modernize over a longer time period.

Stuart Styles: Yes. There are some investors involved, but they are basically private enterprises that sell shares. They’re not publicly owned facilities. The irrigation districts in the western United States are typically publicly owned and managed.

Joshua Dill: Are the schemes encouraging this modernization mostly because it will save them money, or are there legal or regulatory requirements that they’re trying to meet?

Stuart Styles: I think it’s a combination of factors. A common explanation I’ve heard is that they wanted to consolidate the negotiating power of these large agricultural areas within a single entity. For example, after the major earthquake that occurred in Christchurch in 2011, the power company’s supply of power was unreliable and the pricing structure was unstable. A lot of the growers didn’t like that they were being forced to negotiate individually with the power supplier. The schemes removed the need for each grower to have a power line running out to their center pivots and individual pump stations. The new schemes supply pressurized water to each farm at 4 bars of pressure (60 pounds per square inch). That simplifies conditions for the farmers. In the Canterbury Plains, the delivery systems are built over an area with a large change in elevation. The elevation change allows for gravity water delivery and pressurizes the water sufficiently to run a pivot.

Joshua Dill: Were there other technologies that you noticed in New Zealand that haven’t been widely adopted in the United States?

Stuart Styles: Yes, two in particular. The first is magnetic flow meters. I observed an over 95 percent implementation of magnetic flow meters in New Zealand. Every turnout in the areas I visited was monitored and measured. The second technology that I was very impressed by was in-situ pipeline manufacturing. Building a pipe in Nebraska and shipping it to California is quite expensive, primarily because of transportation. In New Zealand, they ship raw materials to a site and set up a fabrication plant where HDPE pipeline is constructed onsite. I had never seen that before.

Joshua Dill: Are there any barriers to the adoption of these technologies in the United States, or is it mostly a matter of awareness?

Stuart Styles: I believe there is a barrier to using this pipeline technology. I was told that there are international restrictions on shipping bulk resin materials out to a remote site. I was never able to track down whether that was a true constraint or whether manufacturers simply didn’t want to go down that pathway in the United States. I think it is something that U.S. irrigation districts might be interested in pursuing.

Joshua Dill: How is the funding situation different in New Zealand and the United States?

Stuart Styles: My opinion is that growers in the western United States are not as willing to individually invest $2,000 per acre in capital in irrigation district modernization. Their expectation is that some of that funding should come from outside grants, water transfers, or some other external mechanism.

Stuart Styles: I wasn’t there long enough to get a good answer to that question. I am still shocked that they were willing to spend so much, and I kept asking the people I interviewed about it. It was a tough question to answer.

Joshua Dill: What were your observations about the overall regulatory environment in New Zealand?

Stuart Styles: My observation is that the regulations there are not as restrictive as in California. My other observation is that they are probably 20–30 years behind California in their environmental oversight. The issues are similar. The groups that are investigating nitrates in surface and groundwater are progressing with their data collection and other efforts. Nitrates in the groundwater are a source of controversy. Some in the New Zealand environmental community are proposing that there should be no nitrates, which is impossible to do if you’re going to have agriculture. There’s been some push and pull over what the right numbers are. The ag community in New Zealand is looking at how groups in places like California and Nebraska have dealt with nitrates in the water.

Joshua Dill: What crops are grown in New Zealand?

Stuart Styles: There are a lot of vineyards, vegetables, and fruit trees. I saw a lot of different crops being grown during my visits. In the Canterbury Plains, the primary agriculture crop is alfalfa and pasture being grown under center pivots. The growers who are growing the alfalfa and pasture grasses are also involved in major dairy operations. The primary export of the dairy farmers is powdered milk.

Joshua Dill: What other differences did you notice between irrigated agriculture in New Zealand and the United States?

Stuart Styles: All the center-pivot systems in New Zealand are designed as dual systems. The growers irrigate with fresh water, but they also irrigate the effluent water that comes from the dairy operation. You don’t see a lot of irrigation systems irrigating effluent in the United States. Second, the New Zealand growers are proud of having created variable rate irrigation (VRI). It is a newer technology that can be applied to center pivots in the western United States. We’ve had guys talk about it for the last several years, but the implementation has been slow. The injection of fertilizer directly into irrigation water is a relatively new technology in New Zealand but has been implemented for about 30 years in the United States. The New Zealand growers are starting to do it more, and it is resulting in improvements in yield and quality. When we were driving around in New Zealand, I would ask the growers whether they were using VRI and fertilizer injection, and the answer across the board was no. The main reason is that they’re putting on so much fertilizer with their effluent application that it would make it too complicated. In the United States by contrast, VRI is becoming more popular. I estimate that 15 percent of U.S. center-pivot users are using VRI. Applying fertilizer with the irrigation water is also a common practice in the United States.

Stuart Styles is director of the Irrigation Training and Research Center at Cal Poly, San Luis Obispo. He can be reached at sstyles@calpoly.edu.