The Gering–Fort Laramie Irrigation District (GFLID) is one of the major districts on the North Platte Project, located in Nebraska and Wyoming. After suffering a major infrastructure failure, the irrigation district had to make huge changes and updates to support the water users. In this interview, Rick Preston discusses the infrastructure failure and all the repairs the district carried out to get the irrigation district back in service and running better than before.

Rick Preston: I was born and raised in the Central Valley of California. As a young man, I worked in the agricultural construction field, building irrigation districts. In 1992, H.R. 429 was signed, taking about 800,000 acre-feet of water away from some of the Central Valley projects. I decided it was time to move to the plains area, and I went to work for the GFLID. I’ve been working with the GFLID as general manager for 30 years.

Irrigation Leader: Please tell us about the GFLID.

The Fort Laramie Canal lies on the south side of the North Platte River, starting at Guernsey, Wyoming, and traveling southeast for about 130 miles. About 52,000 acres

Irrigation Leader: How many irrigated acres do you serve?

Irrigation Leader: Does the GFLID serve acres in both Wyoming and Nebraska?

Rick Preston: The Fort Laramie Canal is shared by the GID and the GFLID. The GFLID holds 51 percent of the acres, which brings us into some contract issues. The GID runs the canal for us and delivers the water to the state line for us. We don’t get involved until the water gets to the state line; then, we take it and carry it through the Nebraska portion of the Fort Laramie Canal and deliver it to about 55,000 acres. We’ve got about 1,300 delivery points on our canal and about 300 miles of lateral. The majority of our water stays within the system. We have five different spillway points on our system, which we use to regulate our water under extreme weather conditions.

Irrigation Leader: Please tell us about the tunnel collapse that occurred in 2019.

Rick Preston: On July 17, 2019, we had a major structural failure in tunnel number 2. At about 1:00 a.m., the alarm on the canal system started going off, and GID personnel went to find out what was going on. First, we thought maybe a tree had gotten in and plugged up a check. Later that morning, we realized that we had an actual structural failure. It was covered with about 120 feet of material. Our engineers speculated that years of water running through the system and rainwater getting into the system had caused material to move around the outside edges of the tunnel, creating an air gap between the tunnel and the material, with the material forming a bridge shape over the gap. In addition, there was about 300 percent more rain than usual in that particular area in 2019. That made the material so wet and heavy that the bridge couldn’t carry its weight. The engineers believe that the bridge failed, hammering the top of the tunnel, causing the concrete to collapse, and creating a dam inside the tunnel. That dam backed the water up and breached the canal system south of Fort Laramie, Wyoming. There was about 1,400 feet of water in the system at that time, and water moves in the system at about 1 mile per hour. After we got all the gates on our Whalen Diversion closed, it took about 14 hours for the water to subside enough for us to evaluate the damage. By that time, it had washed out about a quarter mile of our bank. The material funneled into the tunnel like an hourglass. Now, we were dealing with roughly 5,000–7,000 cubic yards of material in the tunnel, while also dealing with a major breach in the canal system. We started in dewatering and evaluating our next steps right away.

Irrigation Leader: Please tell our readers about your response.

We also had to address the washout and the breached bank upstream on our main canal. About 2–3 days after it aired out, we hired a local contractor to oversee the dirt work. We brought in all our machines and some contracted machines to start moving material and putting our canal system back together. Both of those projects were completed at about the same time.

On August 28, we put water back into the Fort Laramie Canal to try to finish the year. Our normal contracted water season is May 1 through September 30, but because of the failure, the Bureau of Reclamation allowed us to take water into October to try to save our crops. The tunnel breach occurred during the most critical time for the irrigation of our crops, and we lost most of them due to the lack of water. The hay, sugar beets, and some other crops were able to finish, but the corn and beans were not. If that breach had happened in the middle of August 2019, it would’ve allowed us an additional 30 days of water, and we would have been able to save those crops.

Irrigation Leader: What other work will you have to do on the tunnel?

Rick Preston: Because of the shoring we put in that tunnel, we were only able to deliver 75 percent of what customers would normally receive at their headgates. We were only running 1,200 cubic feet per second (cfs) of water through the tunnel, which normally runs about 1,450 cfs. For the remainder of 2019, instead of delivering 1 foot for every 100 acres, we were only able to deliver 1 foot for every 125 acres. The same was true in 2020. Before the 2021 irrigation season, we went in and put steel plating over the top of shoring ribs to try to increase the hydraulic efficiency of the tunnel. By putting the sheeting in and covering the ribs in the tunnel, we increased the amount of water we could run from 1,200 cfs to 1,400 cfs. Today, we’re delivering 85–90 percent of what our customers would normally receive.

When all this started, the cost of temporarily repairing tunnel number 2 was estimated in the millions of dollars. That was money we did not have in our accounts— irrigation districts do not operate in a way that produces an excess amount of cash unless they are power-generating districts, which we are not. We had to start work, and we did not have the funds. We met with Reclamation about finding some emergency money. To our good fortune, the regional director with Reclamation was able to find $4 million within Reclamation’s nationwide operation. Reclamation allowed us to take that money on an emergency repair contract. We will have to reimburse it for 65 percent of that money; the other 35 percent was given to us in the form of a grant. That helped us get started and pay off our debts.

Governor Ricketts also came out here and sat with me so I could go through all this with him and give him some estimated costs for the temporary repair of these tunnels. After that discussion, the Nebraska Legislature passed legislation to allow us to take money out of Nebraska and use it in Wyoming, and the governor provided a $3.8 million grant to the GFLID. That helped us cover on our loan payments and the final cost of repairing tunnels number 1 and number 2.

Today, we’re still not sure which direction we’re going, which means we may have to run with what we have for at least 1 more year, if not 2. Our initial thought was to bring a permeation contractor in to inject about 10 feet of liquid concrete all the way around the existing tunnels to stabilize all the material so that if there were any shifts, the same thing wouldn’t happen. The cost of that was estimated at $25 million for both tunnels. The GID also found a tunneling contractor working in Las Vegas, which proposed digging two new tunnels, side by side, for about $12 million. We would also have to design and build the structures for these tunnels, which would cost another $12 million or so, so both proposed solutions cost about $25 million. However, by law, irrigation districts cannot take out loans from public financing entities equivalent to more than 75 percent of their annual O&M budgets. In our case, that’s about $1.25 million. If we contract with government entities, by contrast, we can go as high as we need to repair the system. If we can work with Reclamation, we can go into a 50‑year contract and pay off our debt over time. We’re unsure of which direction we’re going to go in and how we’re going to find the funding to do this. The frustrating part for us is that we have done as much work as we know how to try to obtain grants. The problem is that we must be approved before we can start to work. We’re in an emergency situation, and we can’t wait. We have to continue to proactively get these systems put back together, not only for the stability of the system, but for the stability of the lives of our water users. There may be grants available that we would actually qualify for, but we can’t wait 18 months to be approved.

Irrigation Leader: What is your message to Congress and to your state legislature?

Rick Preston: The only reason we have progressed as far as we have is that the State of Nebraska and Reclamation stepped up to find funding to address the temporary repairs. Our governor, Senator Stinner, and other legislators worked diligently to approve the change to allow us that money. We’re thankful for their commitment. Our federal representatives, Senator Fischer and Congressman Smith, have been aggressive in trying to get the financial support we need to move forward. For the past 25–30 years, we’ve been talking about the need to address infrastructure nationwide. Today, we are sitting with the heartache of having a structural failure within a federal facility. Nobody has seemed to listen, and now we’re sitting with it in our laps. I would encourage all our constituents, regardless of whether they’re from Nebraska, Wyoming, or elsewhere, to realize that infrastructure in our nation should be a top priority, especially if we want to continue our transport of foods and necessities. If we want to continue growing crops for food and for the livelihood of people within our nation, we need to focus on the infrastructure that has made us who we are and kept us on top of the world’s agricultural economy. Every state where irrigation is vital to the lives of the people needs to focus on infrastructure. I talked with the governor of Nebraska about how the state needs what’s called a Nebraska state water fee. It would be a flat fee charged to all residents of Nebraska. Currently, we do not have readily available funding to address emergencies, to prepare for future devastation, or to address today’s needs. A fee like that would ensure that we would have the funding to address those issues. This is not only needed in Nebraska; every state in the United States needs to do the same.

Rick Preston: The word I would use to address the need for infrastructure is united. We need a united effort by everyone who is involved in water or transportation. We need to come together. We need to make it as clear that things like infrastructure are important for the people of the United States.

Rick Preston is the manager of the Gering–Fort Laramie Irrigation District. He can be contacted at geringftlaramie@gmail.com or (308) 436‑7144. 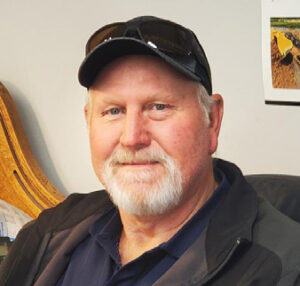