Tom Wilmoth is a Nebraska-based water lawyer who is also involved in putting water to its “highest and best use”: turning it into beer. He is a cofounder of Zipline Brewing, which has a brewery in Lincoln, Nebraska, and four retail locations in Lincoln and Omaha. In this interview, Mr. Wilmoth tells us about Zipline and the intersections of irrigation, water law, and brewing.

Tom Wilmoth: I started practicing law in 1997 in the environmental and natural resources field with an emphasis on water law. I’m still practicing now, but I have been transitioning into a new life, putting water to what is in my opinion its highest and best use, which is beer.

Irrigation Leader: Where are you from originally?

Tom Wilmoth: I was born and raised in Phoenix. I went to college on the East Coast and went back to the West Coast to get an environmental law degree at Lewis and Clark College. I then took that down to Phoenix, where I started my first position with the Arizona Department of Water Resources. After 3 years there, I went to the U.S. Department of the Interior’s solicitor’s office in Phoenix, where I represented the Bureau of Reclamation for a couple of years. Then, I entered private practice with a firm in Phoenix by the name of Fennemore Craig.

Irrigation Leader: How did you end up in Nebraska?

Tom Wilmoth: Fennemore Craig opened an office here. It was kind of a one-person shop, with Don Blankenau at the helm. I moved out to assist Don on some big river litigation involving the Missouri River system and the operation of federal facilities relative to endangered species needs. I think the first time I flew here to work on the project was around 2001. I ended up moving here not much later. I was taken by the place, the people, and the opportunity to work on that large project. I brought my wife, who ended up pursuing a PhD program, then brought my 3‑year-old son out. Later, Don and I started our own firm. We’ve been in Nebraska for 20 years.

Irrigation Leader: Tell us about the history of Zipline Brewing.

Tom Wilmoth: We started it 10 years ago. We really started discussing the project in summer 2011. It took us about 4–5 months to really understand what we were biting off. We were all just home brewers with no professional experience. One of my partners at that time had just gotten back from an extended stay in New Zealand and decided that he would build a zipline in his backyard for his children to play on. About halfway through the construction, despite his warnings not to get on the half-constructed zip line, the kids got on it, and one of them fell and busted himself into a million pieces. As we were thinking about what we were all about to do—start a craft brewery without any experience—we thought, “Well, that’s a really good example of what we’re going to do. We’re getting on this thing and seeing where it goes. It’s possible that we will fall off and bust ourselves into a million pieces, but darn it, we’re going to have a good time.”

Irrigation Leader: Would you give us an idea of the quantity of beer that you’re brewing now?

Tom Wilmoth: We make about 10,000 barrels a year now, which makes us the largest brewery in Nebraska. A barrel is 31 gallons, so we’re just short of an acre-foot of beer a year.

Irrigation Leader: Do you have just one brewing location?

Tom Wilmoth: Yes. All the beer is made at one brewery in Lincoln. We sell it at our four retail locations, two in Lincoln and two in Omaha, and it is distributed throughout the adjacent states. We have distribution in Iowa, Kansas, Missouri, and South Dakota, and we recently entered Nashville, Tennessee. We have sent two shipments of beer to Mexico, and we also ship beer to Canada.

Irrigation Leader: Your beer hall in Lincoln resembles something one would find in Germany, with long tables meant to be shared and an emphasis on family and family activities. Would you tell us about that?

Tom Wilmoth: Each of our spaces is designed for a different purpose. We have four retail locations, two in Lincoln and two in Omaha. The first one was adjacent to our brewery and is old school. It’s like a small coffee shop and is meant to be intimate. It’s designed to be a gateway to the brewery. It’s where you come to meet all the brewers and the people who run the business. The second place we built, and the

one you’re referring to, was our location in South Lincoln, which we call the Beer Hall. As you say, it was inspired by a German beer hall. We wanted to create a space that was loud, open, fun, and welcoming. When you walk into that space, you notice that there’s nothing between you and the bar. You can walk directly between two large communal tables to the bar front and meet with the bartender. That’s by design; we wanted that space to make you feel like you were getting a giant bear hug when you walked in. That was my experience as a younger guy with the beer hall scene in Munich. The warmth and hospitality you find in those places is unparalleled. We wanted to create the same environment.

Irrigation Leader: Have you considered opening branches or franchises in other locations?

Tom Wilmoth: We’ve been going in that direction, trying to expand as much as we can. There are some legal issues with that, but we actually did get the rights to establish five locations a few years ago. We can still start one more. We’ve been looking all over the state. I think it’d be fun to open one at a smaller location farther west.

Irrigation Leader: How many jobs have you created through Zipline?

Tom Wilmoth: We started originally with just the three partners and our wives. We did a lot of work at that time. My son helped quite a bit in those early days. Now, 36 folks work with us, including our part-time folks. We’re proud of that. We couldn’t keep all our retail staff during the COVID‑19 shutdowns, but we were fortunate enough to keep our core brewing team together, which is something we’re proud of. Now, things are starting to look up, and we are returning to pre-COVID‑19 sales levels. We’re excited to get back to business as usual.

Irrigation Leader: How have you come up with names for your beer?

Tom Wilmoth: When we started the brewery, we felt that the craft brewing scene was a small circle of folks that was a bit inaccessible, so we started naming our beers simply and straightforwardly based on what we thought they represented. For example, our best-selling beer is an altbier that is copper in color, so we called it Copper Alt. One of our original beers was a New Zealand IPA, so we called it NZ IPA. We have a porter that has some rolled oats in it, so we called it Oatmeal Porter. As we progressed, we made so many beers that we ran out of names and couldn’t just keep calling them exactly what they were. We started to have a little more fun with them. Now, we have things like Cloud Lifter, which is designed to take the blues away. We have a beer that we’re selling quite a lot of right now called DAAANG! The name comes from the fact that it’s so dank and tangy.

Irrigation Leader: Zipline Brewing depends on irrigated crops and lots of water. Do you see your two professions as complementary or separate?

Tom Wilmoth: Two of our primary ingredients are hops and malted barley, both of which are grown primarily under irrigation. Most of the stuff we get is from either Wyoming or Washington. I know that irrigation is incredibly important for the success of those crops, all the more so with climate change and hotter and drier temperatures. Irrigation access is critical to making sure that those crops keep coming in and that the harvest is good. I know that this year, the U.S. barley harvest is projected to be down about 35 percent; we’re nervous about that.

My 20 years in water law have given me a serious appreciation for the value of water and how it can be used to create and produce. Zipline Brewing is not farming, but we rely on the availability of good-quality water supplies to produce something that everybody can enjoy. From the standpoint of my two lives, trying to gain access to and protect water supplies for production is always something that I’ll be involved in.

Irrigation Leader: What is your message to your state legislature and to Congress? What should they know about irrigated agriculture in Nebraska and about Zipline?

Tom Wilmoth: The simplest thing, coming out of the COVID‑19 pandemic, is “Thank you.” We got great support through the Paycheck Protection Program, as did every brewery in this state that I know of. We thank the taxpayers for helping us with that. The state legislature and Congress helped us get access to the programs we needed.

Good access to water is key. We can’t produce beer without water. About 5 gallons of water go into every gallon of beer, so we’re an intensive user. We will always need access to water, so the more that folks can do to make sure that we have access to reliable water supplies, the better off we are.

Irrigation Leader: Is there anything you’d like to add?

Tom Wilmoth: I want to thank everybody for supporting us throughout the last 15–16 months. It’s been a really, really challenging time. We have had an almost embarrassing amount of support from friends, family, patrons, and our legislators at the local and national levels. We are very, very grateful.

Tom Wilmoth is a partner at Blankenau Wilmoth Jarecke LLP and a cofounder of Zipline Brewing. For more about Zipline Brewing, visit ziplinebrewing.com. 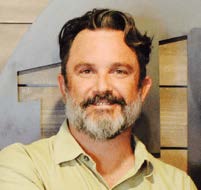