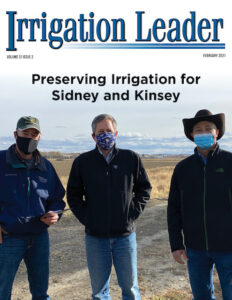 Phil Rigdon is the superintendent of the Yakama Nation’s Department of Natural Resources, which employs over 500 people and works on fisheries, water, forestry, and environmental protection. Under Mr. Rigdon’s direction, the department has been undertaking tributary supplement and aquifer recharge projects in the Yakima basin in order to serve the Nation’s out-of-stream needs, benefit agriculture, and restore native salmon to vast areas of Washington State. Mr. Rigdon has also been pivotal in cooperating with neighboring irrigation districts to pursue shared goals. We discuss all this and more in this month’s Irrigation Leader cover story.

In this month’s issue, we also speak with a number of executives, professionals, inventors, and implementers who are working to face our nation’s infrastructure challenges. Friant Water Authority, which delivers over a million acre-feet of surface water annually to water users in the Central Valley of California, is facing a major issue of ground subsidence. In our cover story, Friant CEO Jason Phillips talks about the challenges of raising hundreds of million dollars for federally owned infrastructure repairs.

We also speak with Walter Winder of Hydro Consulting, which produces AquaLastic, an affordable and highly effective elastomeric product used to repair cracked concrete conveyance structures—and keep them repaired for the long haul.

Looking to Montana’s Hi-Line, we speak with Jennifer Patrick of the Milk River Joint Board of Control. The Joint Board operates infrastructure that dates back to the early 20th century, and now demands repairs that are daunting in their scale and potential cost.

Riverscreen has created an innovative floating pump screen that can pull anywhere between 20 and 2,000 gallons a minute from rivers, lakes, streams, or livestock lagoons, making it a potential addition to an individual irrigator or irrigation district’s infrastructure.

We also talk to Kevin Werbylo of the Headwaters Corporation, the entity that implements the Platte River Recovery Implementation Program. Headwaters is using a mix of new and existing infrastructure to provide endangered species law compliance and water use mitigation for water users in the Platte River basin.

Finally, we salute a longtime colleague—Jeff Sanger of Worthington is retiring after 30 years in the power industry. It has been a pleasure to work with Jeff, and we wish him well.

Infrastructure maintenance is a challenge for everyone in the irrigation industry. We hope that the stories of these hardworking men and women are an inspiration to you as you read this month’s issue of Irrigation Leader.

Protecting Groundwater and Reversing Subsidence in the Coachella Valley