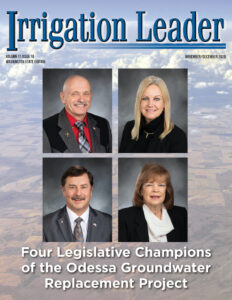 The Republican River basin and the interstate compact that divides its supply among Colorado, Nebraska, and Kansas has been subject to much contentious debate and litigation in the last 30 years. The term cooperative collaboration would not describe the three states’ interactions during that time. However, “cooperative collaboration” is how Dr. Jim Schneider, acting director of the Nebraska Department of Natural Resources, described the current working relationship between Kansas and Nebraska during our recent interview, and Jackie McClaskey, Kansas secretary of agriculture, characterized the interactions among Colorado, Nebraska, and Kansas regarding the Republican River as “a true working relationship,” during our interview with her. What happened? Well, at the risk of oversimplifying, people started talking. The respective state representatives acknowledged each state’s needs and are now meeting on a monthly basis to focus on management solutions.

Another example of cooperative collaboration is the proposed J-2 Regulating Reservoir as described by Don Kraus, general manager of the Central Nebraska Public Power and Irrigation District. The result of nearly 15 years of study, the 1,500-acre reservoir will capture and retime canal return flows to smooth out fluctuations in releases to the Platte River. By stabilizing releases, the reservoir will offset groundwater pumping needs and help the state of Nebraska and the Central Platte Natural Resources District comply with the Platte River Recovery Implementation Program for endangered species. The reservoir adds additional storage and management flexibility for the district without putting irrigation deliveries at risk.

The recent negotiations among Colorado, Nebraska, and Kansas, as well as the development of the J-2 Regulating Reservoir, demonstrate what can be accomplished when multiple parties work together toward a shared goal.