To build and maintain large networks of canals, laterals, and pipelines spanning many miles of territory, irrigation districts rely on fleets of vehicles and heavy equipment, which they must successfully and cost-effectively acquire, maintain, keep track of, and retire. This month, we focus on those assets.

First, we bring you a profile of John Stuhlmiller, who brings extensive experience in the Washington legislature and the Farm Bureau to his new position as executive director of the Washington State Water Resources Association.

Turning to equipment, we speak with Bryce Evans, the co-owner of Missouri-based Evans Equipment, which acquires good-quality late-model heavy equipment from around the world, strips it down in most cases to the bare frame, and rebuilds it. Buying rehabilitated equipment from Evans can save customers 40–50 percent of the cost of new machines. Next, we speak with Bill Fuchs, the owner of Maximized Water Management and the inventor of the Aquatic Vegetation Rake, an excavator-mounted tool that quickly and effectively removes waterweeds from canals. What’s it actually like to drive Caterpillar’s D11 bulldozer, the largest one it manufactures? We talk to Chris Crow of Kennewick Irrigation District to find out. We also talk with Hamish Howard, the CEO and managing director of Assura Software, about his company’s asset-management solutions, which are used by several irrigation districts.

Lyndon Vogt, the general manager of Nebraska’s Central Platte Natural Resource District, and Darren Cudaback, a conservation specialist with Precision Conservation Management, tell us about their partnership to help local growers with their water management practices.

Finally, we bring you a heartwarming story about how Reinke Manufacturing and Holdrege Irrigation built a one-fifth-scale center-pivot system for Blaize DeGroff, a 9‑year‑old boy from Ord, Nebraska.

Finding, purchasing, maintaining, and retiring vehicles and heavy equipment are crucial tasks for irrigation districts. I hope that comparing your practices to those of the professionals we interview this month will give you new ideas and help you optimize your own practices.

Glenn Grette: Permitting and Fish-Friendly Design in the Pacific Northwest 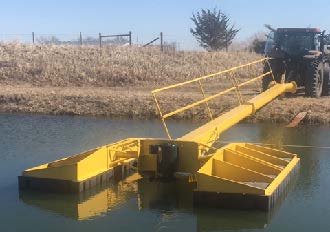