WaterForce is a versatile New Zealand–based water services company that designs and delivers irrigation, water, and wastewater systems for clients including farmers, growers, and sports facilities. Today, one of WaterForce’s focuses is advancing center-pivot irrigation systems through variable-rate irrigation (VRI) and its monitoring and communication system, SCADAfarm. In this interview, WaterForce Director Paul Donaldson tells Irrigation Leader about the company’s history and current services.

Irrigation Leader: Please tell us about the history of WaterForce.

Paul Donaldson: The three founders of WaterForce— Wayne Bell, Ron McFetridge, and I—worked at another New Zealand–owned company, which was actually acquired by a large overseas corporation in 2000. We didn’t enjoy that company’s corporate approach and felt that the Kiwi farmer needed a hands-on, agile company that could respond to any demand, so we set up WaterForce in October 2002.

Today, we have 13 operations throughout New Zealand, with a large concentration on the South Island, and about 250 staff. Each branch is relatively autonomous and offers a complete turnkey package to service the surrounding area, including full design, sales, engineering, and service support. Each branch has a sales-design team, a retail store, a workshop facility, and fully equipped service vehicles. The Christchurch branch, which is one of the largest, has 45–50 staff members, including engineers, service engineers, electrical engineers, technicians, design and sales staff, and administrative staff.

Our clients include farmers, growers, and people in charge of sports facilities. Each area has its own culture and identity, which leads to specific demands. Central Otago, in the deep south of our South Island, has a lot of viticulture, but farmers in the area have also started doing some larger broad-acre irrigation using center-pivot systems. That same area has started to demand quite a lot of residential amenity irrigation as well because of amenity development and the construction of holiday homes in the Queenstown and Wanaka areas.

WaterForce is distinctive because it can move and change direction quickly. We look for new marketplaces and grow them, even if that requires a change in training, culture, or engineering. For instance, after the large earthquakes in Christchurch in 2016, there was a lot of silt movement and damage in wells. We have been working with the local city council to do reengineering around the headworks and pumps of those wells. It’s been lucrative for our business, and that has been helpful because arable farming and dairy farming have had a bit of a downturn due to environmental pressure under the new government.

Irrigation Leader: What sorts of projects do you work on?

Paul Donaldson: In a lot of countries, irrigation systems are often designed by a consultant and then put out to tender. In New Zealand, irrigation traditionally has not been seen as a professional engineering discipline, because there have traditionally been few standards. Our irrigation association, Irrigation New Zealand, and three or four other key companies, such as WaterForce, have worked hard for the last 15 years to establish design standards and promote professional operators. We have tertiary-qualified designers and carry the responsibility of the whole schemes we build, some of which are quite large. We handle NZ$5–$10 million (US$3.3–$6.6 million) projects. They’re not your normal on-farm irrigation projects; they often involve large community supplies that are servicing several farms and 20–30 center-pivot systems.

Irrigation Leader: Please tell our readers about the use of center pivots in New Zealand.

Paul Donaldson: The history of irrigation in New Zealand is quite interesting. In the 1950s and 1960s, there was a lot of primitive diesel pumping and aluminum spray line. In the 1970s and 1980s, drag-hose-type irrigated guns and rotating booms had evolved. When the hydraulically driven pivots of the 1980s came to New Zealand, they brought some service difficulties. Introducing new technologies to remote areas was quite challenging, particularly in that era. Electric center pivots started coming to New Zealand in the 1990s.

Center pivots arrived in an era when we were used to working in large rectangles with drag-hose irrigators or aluminum spray lines, and we were slow to accept their benefits. New Zealand is an island nation with high-wind issues, so we have a lot of shelterbelts. When a pivot arrives, those shelterbelts have to be cut down, lowered, or removed. That has caused a lot of consternation over the years. Once our farmers discovered how much more efficient center pivots were at applying water, however, they transitioned.

When you use a rotational machine like a hard- or soft-hose spray-line irrigator, you irrigate on a 6- to 12‑day rotation. However, we often overestimated our soil’s water holding capacity. With pivots, we could do a full rotation in 2–3 days and apply 20‑odd millimeters (0.8 inches) of water. The production increase was quite significant, which told us that we had been subjecting our crop to moisture depletion by expecting our soils to hold moisture for 6, 8, or 10 days.

Another key benefit of center pivots is that they can easily be turned off, especially if you are doing soil monitoring and using predictive weather data. New Zealand’s weather is exceptionally variable, even in the summer. With a 10‑or 12‑day rotation system, if it rained, farmers couldn’t afford to turn their systems off, because the next day, the evapotranspiration rates would climb rapidly again, and with this rotation, any delay in getting back within the 10–12 days would cause production loss due to soil moisture stress.

You may have heard that New Zealand has some extremely long pivots with as many as 29 towers. That is not something to be proud of—it’s foolhardy. During the 1990s, it was a source of pride to have the longest pivot. Some were 1,000–1,100 meters (3,281–3,609 feet) long. We subsequently found, to our shame, that those pivots had to deliver water at end of the pivots at such a speed that the soils couldn’t actually sustain it. The application rate at the end of a 1,000‑meter half-circle pivot is 60–70 millimeters (2.36–2.75 inches) per hour. There is no soil type in New Zealand that can handle that application rate, and it causes runoff. In the United States, farmers realized that 500–600 meters (1,640–1,968 feet) was the ideal length for pivots before we had caught on to that. We’ve started to learn from that and are focusing on not exceeding the infiltration rate of the soil, which is often 25–35 millimeters (0.98–1.38 inches) per hour. In fact, that is part of our code of practice. We design around that, so often the soil type will determine the length of pivot that we will use.

Irrigation Leader: What new technologies or systems have been developed in New Zealand?

Paul Donaldson: Around 10–15 years ago, we developed VRI technology. My understanding is that it was pioneered by a small Kiwi company composed of a couple of young farmers who had studied robotic engineering. Eventually, the Lindsay Corporation bought that little Kiwi company. VRI has helped minimize runoff and nitrate leaching. It is wonderful for a square or rectangular paddock regime— which is quite common in New Zealand—in which there are different crops or crops at differing levels of maturity in the different paddocks. VRI allows a farmer to adjust application rates as a pivot passes from one crop to another. VRI can also turn the sprinklers on a pivot off as they pass over dairy lanes—the lanes that cows go up and down morning and night for their milking—so as to avoid runoff.

Our regulatory bodies, such as regional councils, which have control over the resource consents for farming, often push for pivots to be equipped with VRI. The system costs farms NZ$100,000 (US$66,650) per pivot. We at WaterForce sometimes question the viability and necessity of this. We believe in VRI, but I believe that in some cases, it has been oversold in New Zealand.

Irrigation Leader: What are your thoughts on the use of fertigation in New Zealand?

Paul Donaldson: I am surprised at the slow speed of adoption. I would say that 5 percent of pivots at most are currently being used for the introduction of nutrients.

Paul Donaldson: WaterForce has developed a communication system called SCADAfarm. It allows you to monitor pump systems, pivots, weather data, and soil moisture through a smartphone app. SCADAfarm aims to create predictive weather data. The more weather stations we can install and connect, the better the data. The need for this technology might seem strange to someone in Nebraska, Australia, or Israel, where it doesn’t rain in the summer. But weather patterns in New Zealand are highly variable. A hot wind from Australia can pick up moisture from the Tasman Sea and come over the Southern Alps onto the Canterbury Plains. That dry wind can last for 5 days and quickly deplete the soil moisture. Then, an easterly or southerly wind can suddenly bring cold winds and rain up from the South Pole or from the Pacific Ocean. This happens frequently through even our hot summer months. Being able to predict the weather of the next 2–4 days can make a big difference for how a farmer plans to irrigate and hence can optimize water use, minimize runoff, reduce leaching, and save on power costs.

A lot of the hardware in SCADAfarm is made by Schneider. The company has an international reputation, and its products are used in major municipal facilities throughout the world. We also use Davis wind station data.

Other pivot manufacturers have got their own remote-control systems. Some are good and reliable, but they don’t have the comprehensive overview or the capacities that SCADAfarm does. Those capacities come at a price, however. Nothing made in New Zealand is cheap, because manufacturing is a numbers game. Whereas a lot of U.S.- manufactured pivots now have built-in app-controlled devices at almost no cost, SCADAfarm costs NZ$3,000– $6,000 (US$2,000–$4,050) per unit. It’s certainly, in my opinion, one of the key advancements that we’ve had in the last 10 years and has been developed at great cost to WaterForce. The investment is going take time to recoup, but we believe in it and are positive about the investment returns, particularly as we look at the export market potential.

Irrigation Leader: Is it currently available in the United States?

Paul Donaldson: Not yet. We’ve been working with the telecommunications companies Vodafone and Spark to ensure total reliability before we release the product overseas.

WaterForce is the leading Valley distributor for New Zealand. We consider our relationship special, and we have enjoyed tremendous support for what we all consider a superb product. We have a dedicated 86,000-square-foot yard and warehouse for the distribution of our Valley product. The company has a lot of experience and a quality product. It is interested in our SCADAfarm and is keeping in touch with what we’re doing. Valley, of course, has its own development, which is reliable and free of charge. However, SCADAfarm has greater capacity, particularly when it comes to pumping data and predictive weather forecasting.

Irrigation Leader: What should every irrigator know about WaterForce?

Paul Donaldson: We have striven to create professionalism in our industry; we promote irrigation as a career choice; and we provide a unique cadetship for graduates, something we are proud of. We are committed to high-level technologies like VRI and variable frequency control for pumping systems and train our engineers, electricians, and designers appropriately.

WaterForce is committed to supporting and servicing our clients with our dedicated Valley pivot distribution premises and with over NZ$6 million (US$4,341,090) worth of stock. We understand the need for efficient, effective service 24/7.

I tell farmers that I can’t promise them a smooth road with their irrigation systems. We coordinate with so many components and contractors that there will be one or two hiccups. All I can promise them is that we won’t walk away from any problem. We will address it, we will deal with it, we will communicate, and we’ll move on. I think farmers like that—they are used to challenges. I’ve always said that there are three keys to success in an irrigation company: service, service, and service. Promising little and delivering a lot is key.

Paul Donaldson is a director of WaterForce. He can be contacted at pdonaldson@waterforce.co.nz. 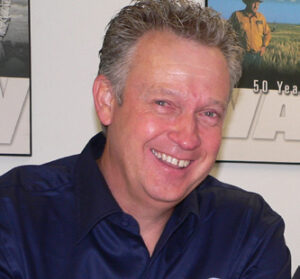