Hunter Morrical, a project engineer at the Bozeman, Montana–based planning and design firm WGM Group, took interest in the Bureau of Reclamation’s Canal Safety Challenge and entered the competition. WGM’s design, the Hydro Scoop, earned it a spot as one of the three finalists that have each been awarded $50,000 to build a prototype. In this interview, Mr. Morrical tells us about the design and his hopes for its development.

Hunter Morrical: I’m a project engineer for WGM Group in Bozeman, Montana. My responsibilities include construction management, civil and hydraulic design, drone surveying, pipe and pump analysis, and project management. My family was in the concrete construction industry when I was growing up, so I gravitated toward civil engineering when choosing a career to pursue. I received a degree in civil engineering from Montana State University. I have 6 years of professional experience in the civil engineering industry. Growing up in Bozeman, my life revolved around water in the form of fishing, boating, camping, and skiing, so naturally, I’ve been drawn toward engineering projects involving water and the environment. I’m a big whitewater rafter, so I like hydraulics, and I’ve been pursuing a career with an emphasis on hydraulics and water resources.

Irrigation Leader: Please tell us about the engineering design activities your firm is involved in.

Hunter Morrical: Our firm has a broad scope. We cover a lot of disciplines, including environmental engineering, transportation engineering, civil engineering, land planning and landscape architecture, as well as water resources. Some environmental scientists work at WGM, and we also have a surveying department. We do stream restoration projects, environmental assessments, wastewater management, and straightforward civil infrastructure design for various development types. We mostly work within our state, but we also have had projects in neighboring states. We have about 100 employees, and we have 4 office locations throughout Montana.

Irrigation Leader: How did the firm get involved with canal safety?

Hunter Morrical: That was an interest I had developed over the last few years before I started working for WGM. I was working for another firm, and a couple of my projects involved streams and irrigation diversions. I also had a little experience with canals from growing up in Bozeman. As a kid, I would play in irrigation ditches, and I almost lost a dog to an underground culvert. I have always been conscious of the need for safety around irrigation structures and canals because I know how they are attractive to the public.

Irrigation Leader: How did you find out about Reclamation’s Canal Safety Competition?

Hunter Morrical: I was scrolling around on LinkedIn and saw an article on it. I read through the competition guidelines and immediately thought of the idea I’ve been working on for the last couple of years. I thought it was a good fit and would be a good opportunity to try to get some money to implement my idea. I entered the competition under the company name, but it is primarily me who is running the prototyping, with the support of a few staff members.

Irrigation Leader: Did you just submit a proposal on paper, or have you already developed a prototype?

Hunter Morrical: I probably could have gone with a paper submission, since the first phase of the competition didn’t require any sort of prototype. However, I did end up building and testing a rough-scale prototype as part of my submission. I also included some footage in my submission video to outline the principle of my idea and explain why I thought it would work. Building the original prototype was helpful for me. I learned a lot, and it gave me the confidence to pursue this idea, because once I was able to look at it on a small scale, I started thinking it was definitely feasible.

Irrigation Leader: Did you take the prototype to a canal to test it?

Hunter Morrical: Yes. We have a family friend who has property in Manhattan, Montana. A spring creek with some culverts runs through their property, and they gave me permission to test my prototype on those culverts. Being able to test the prototype in the creek was an important piece of the puzzle.

Irrigation Leader: Will you be using your $50,000 prize to rebuild your prototype on a larger scale?

Hunter Morrical: Yes. That prototype will be tested at Reclamation’s hydraulics lab in Denver during the week of November 15. Reclamation will have a trapezoidal channel constructed for us to test our prototypes with varying flows and other testing conditions. We’ll be spending the entirety of the prize money on research, testing, modeling, and then building prototypes to fit that scale.

Irrigation Leader: Would you tell us about your concept?

Hunter Morrical: The idea is called the Hydro Scoop. It’s a basket-type device that sits on a culvert entrance or within a normal canal section, slows the water profile, and creates a head-pressure buildup similar to that created by a small hydroelectric dam. It creates a slow pool at the entrance of the culvert with a graded-off bottom. By building up a little head pressure on that device, you can push water underneath it at a greater velocity so that you can maintain your relative flow amounts. The slow, slack water pool is a good point of rescue, and a good point to allow animals or people to rescue themselves.

Irrigation Leader: How large will the device be?

Hunter Morrical: The one we’re prototyping will be based on the channel dimensions that we’ve been given. It’ll probably be about 10 feet wide. From the standpoint of a real-world application, I think these could be modified to fit in small irrigation channels that are 5–6 feet wide, canals that are 20–30 feet wide, and everything in between. The engineering principles are similar for each scenario. There are some complications once you get to a larger scale; there are some structural design components that would need to be considered. The idea is based around a flexible design that could be implemented in a variety of different scenarios.

Irrigation Leader: Whether or not you win the competition, is this something you and the company see yourselves manufacturing?

Hunter Morrical: I’m not sure how this project will develop or whether it will get to the scale where mass manufacturing makes sense. We could also do designs on a case-by-case basis and have the structures be built by a contractor. I’d love for it to turn into something that we could manufacture, but a lot of testing would need to be done before we could produce a device that could be installed in different scenarios without specific design research for each implementation.

Irrigation Leader: What is your vision for the outcome of this competition?

Hunter Morrical: It’s a great opportunity to work with Reclamation and be involved in some applied research. It’s not something we get to do every day, so I’m grateful for the opportunity. We don’t often get money to do a project where the outcome is unknown. The overall goal is to design one of these devices, prove it works, and implement one in an area where there is high animal or human traffic. Hopefully, it will have a good effect and will save somebody or something from drowning in the future. My overall goal is to get something out there that works for the greater good of our communities.

Hunter Morrical is a project engineer at WGM Group. He can be contacted at hmorrical@wgmgroup.com or on LinkedIn at www.linkedin.com/in/huntermorrical. 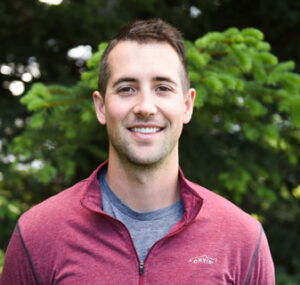