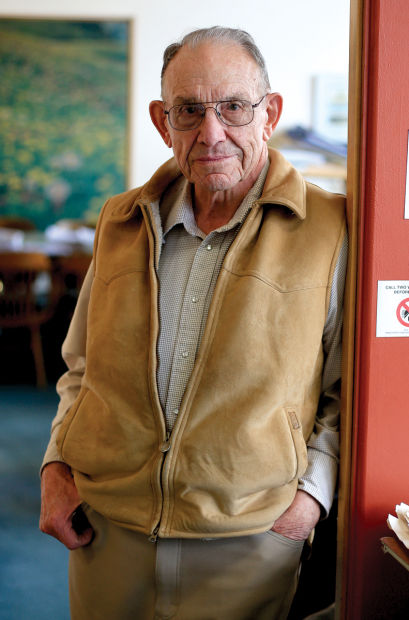 William Theodore “Ted” Diehl, 92, a long-time resident of Jerome, Idaho, passed away Tuesday, February 20, 2018, at his home, surrounded by family. Born in Twin Falls on February 16, 1926, he was the first child of William Travis and Beulah Edith (Hanes) Diehl. Ted was the eldest of four siblings, followed by Jerry, Les, and Dorothy. All have preceded him in death.

Ted attended school in Jerome, graduating from Jerome High School in 1944. He excelled in sports, especially football and boxing. After graduating, he joined the Navy in the latter part of World War II, and he trained as and became a Navy fighter pilot. During his time in the Navy, he also played football and became the Navy Golden Glove boxing champion. After 2 years of service, he left the Navy and started his agricultural engineering education at the University of Idaho. He continued his boxing and football careers at the university and graduated in 1950.

After graduation, he farmed and became a Federal Bureau of Investigation agent. Ted joined the North Side Canal Company (NSCC) as manager in 1969. He guided the NSCC for 44 years. He was known as a passionate champion for Idaho water rights and was awarded and recognized with all the water awards an individual could obtain.

In lieu of flowers, the family requests that donations be made to First Presbyterian Church of Jerome, Jerome School District Foundation–High School Athletics, or the University of Idaho–Vandal Athletics.

Condolences and memories may be shared with the family on Ted’s memorial webpage at www.farnsworthmortuary.com.

I’ve associated with some great people and had a real wonderful life. I’m very appreciative of it. We are all very lucky to live here in the United States, and I am proud of it.